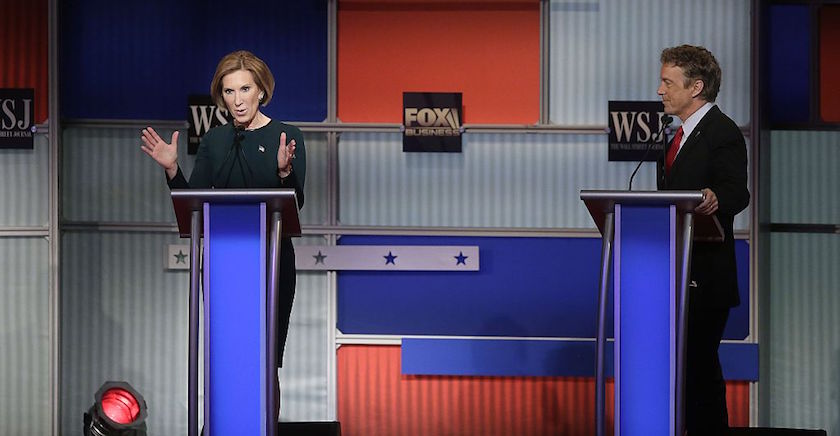 Carly Fiorina and Rand Paul will be excluded from the main stage at Thursday’s Republican presidential debate in Charleston, S.C. because of lackluster poll numbers, Fox Business Network announced Monday.

Donald Trump, Ted Cruz, Marco Rubio, Ben Carson, Chris Christie, Jeb Bush, and John Kasich will participate in the primetime debate at 9 p.m. Thursday, the hosting network announced. The network required candidates to be among the top six in an average of national surveys, or in the top five in the average of surveys in Iowa or New Hampshire, in order to make the debate. Other candidates will be relegated to an earlier undercard debate starting at 6 p.m.

Paul said he’d skip the debate altogether, rather than participate in the junior varsity contest, which will also include Mike Huckabee and Rick Santorum.

“I’ll be taking my campaign directly to New Hampshire and Iowa. I’m not going to be in South Carolina,” Paul told CNN Monday evening. “It’s a mistake because the thing is we actually have been in the top five or six in most of the recent polls. In fact, last week in a national poll we were just one point out of fourth place. So I think it’s a mistake to try to exclude me from the national debate.”

The network’s criteria result in Paul’s first downgrade to the undercard debate, and a snub to Fiorina, who was initially relegated to the earlier debate in the first contest this summer but worked her way onto the main stage. For Christie, it’s redemption, after he was forced into the undercard debate in November, before seeing his poll numbers rebound in Iowa, New Hampshire, and nationally.

Unlikely previous efforts to winnow the field, the Fox Business Network decision may take on additional influence coming just weeks before the Iowa Caucuses. Fox News will host another debate on Jan. 28, four days before the caucuses, in Des Moines, but has yet to announce the entrance criteria.