‘El Chapo’ Faces Extradition to U.S. Thanks to Sean Penn 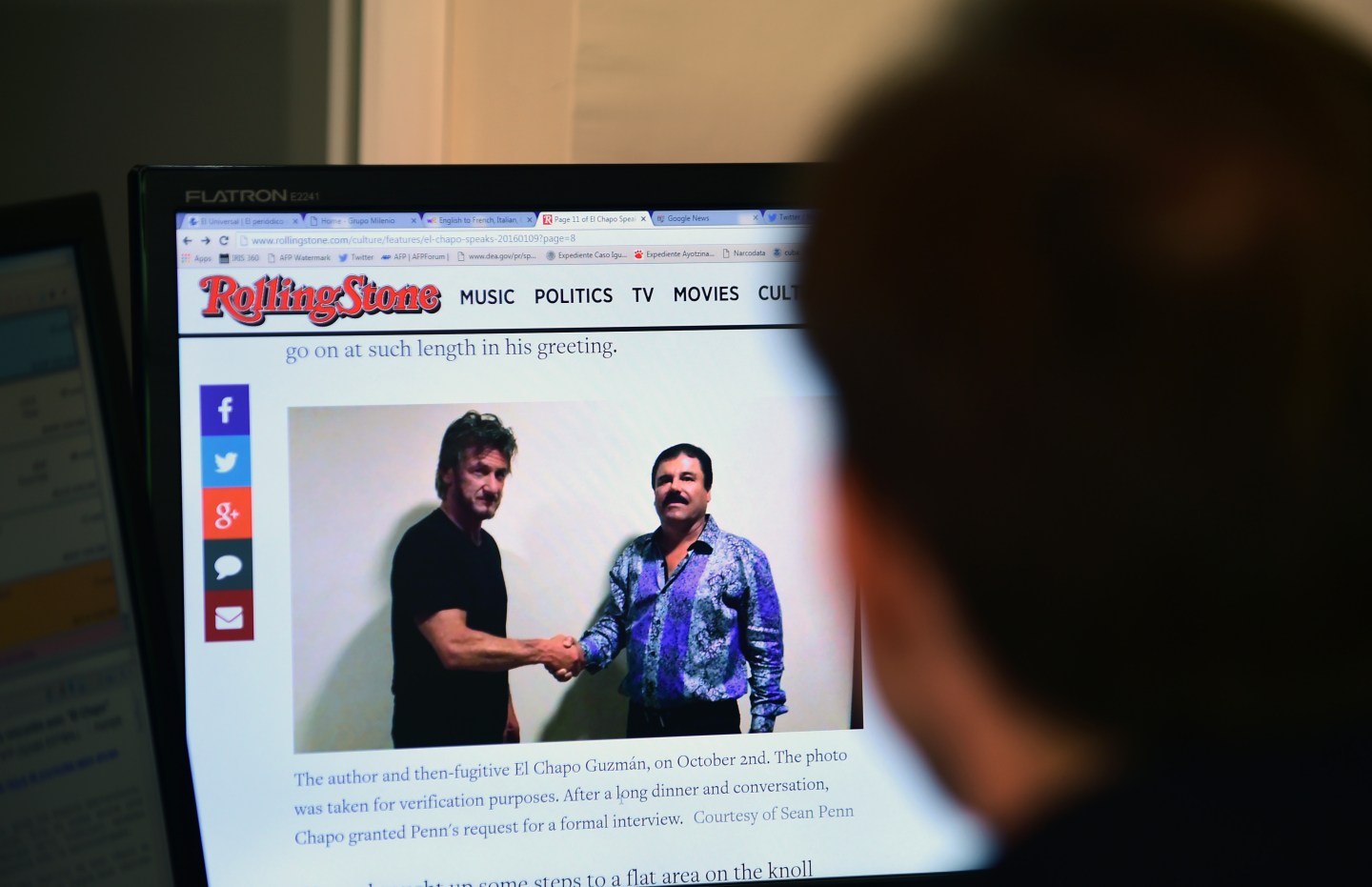 A man reads an article about drug lord Joaquin Guzman, aka "El Chapo", showing a picture of him (R) and US actor Sean Penn, on the website of Rolling Stone magazine, in Mexico City, on January 10, 2016. The Hollywood-worthy recapture of "El Chapo" took a stunning turn Sunday as authorities sought to question Penn over his interview with the Mexican drug kingpin. A federal official told AFP that the attorney general's office wants to talk with Penn and Mexican actress Kate del Castillo about their secretive meeting with Guzman in October, three months before his capture on January 8. AFP PHOTO / ALFREDO ESTRELLA / AFP / ALFREDO ESTRELLA (Photo credit should read ALFREDO ESTRELLA/AFP/Getty Images)
Photograph by Alfredo Estrella — AFP via Getty Images

Mexican drug lord Joaquin Guzman, more famously known as “El Chapo,” is in the process of being extradited to the U.S.

El Chapo escaped from a Mexican prison in July and had been on the run for about six months, during which time he met Oscar-winning actor Sean Penn for a Rolling Stone interview. Mexican Attorney General Arely Gomez told CNN that his lines of communication with actors and producers, particularly in regard to an El Chapo biopic, are partly to thank for his arrest on Friday.

El Chapo faces indictments in seven different U.S. cities for charges that include drug trafficking, money laundering, and homicide. The U.S. Attorney’s Office for the Eastern District of New York is writing a formal extradition request asking that Guzman face charges in Brooklyn. Mexico has rejected multiple requests by the U.S. in the past but, according to the New York Times, officials suggest that the two countries are cooperating regarding this latest bid.

Michael Braun, who was involved in Guzman’s case before retiring from the Drug Enforcement Administration in 2008, told CNN that the only way for Mexico to “ensure absolutely that they don’t go through another embarrassing situation, another embarrassing escape, is to extradite him to the U.S.” The extradition process could take months, and El Chapo‘s lawyers have filed an injunction to fight it. Though nothing is definite, Braun, former DEA chief of operations, told the Times he’s confident that the drug lord will be extradited.