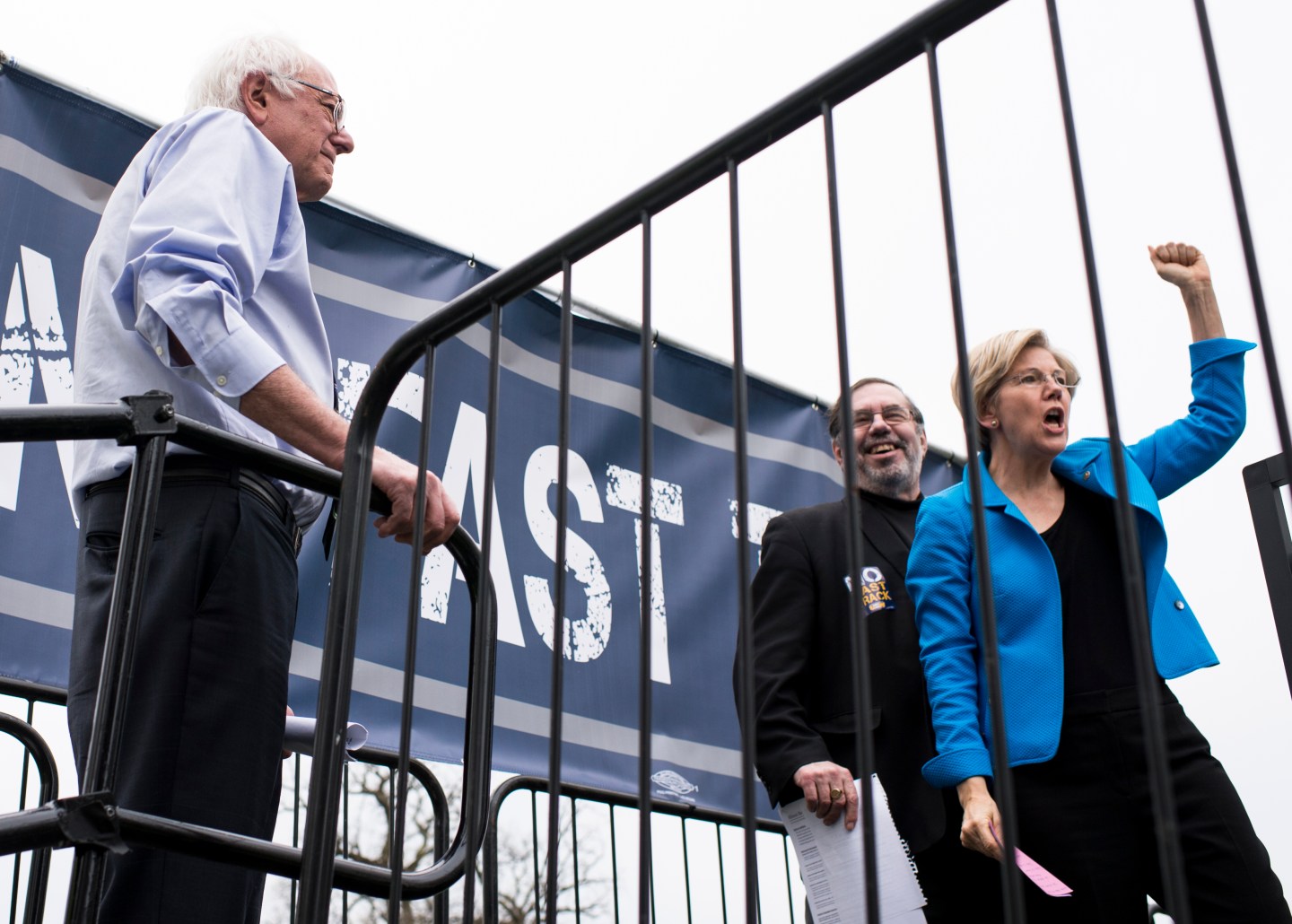 Senator Elizabeth Warren has not yet endorsed a presidential candidate, but she unleashed a series of tweets on Wednesday praising Senator Bernie Sanders for his stand on Wall Street reform.

We need to level the playing field and end too big to fail.

I'm glad @BernieSanders is out there fighting to hold big banks accountable, make our economy safer, & stop the GOP from rigging the system.

The admiration is mutual: Sanders referred to Warren in a speech Tuesday that laid out the Democratic candidate’s plan to reform Wall Street. Sanders voiced his support for reinstating the Glass-Steagall Act, a legislation proposed by Warren that would create a firewall between commercial and investment banking. “Let’s be clear: This legislation, introduced by my colleague Sen. Elizabeth Warren, aims at the heart of the shadow banking system,” Sanders said in the speech delivered in New York City. “In my view, Sen. Warren, is right.”

In the speech, Sanders also promised to break up the biggest “commercial banks, shadow banks, and insurance companies whose failure would pose a catastrophic risk to the United States economy without a taxpayer bailout.” Warren echoed Sanders’ concern over the continued prominence of financial institutions whose failure could spark another financial disaster.

11 big banks are still so risky that if any one started to fail, they'd need a gov bailout or risk taking down the economy – again.

But Warren isn’t praising Sanders exclusively. When frontrunner candidate Hillary Clinton penned an op-ed outlining her strategy of Wall Street reform in The New York Times last month, Warren weighed in positively.“Whether it’s attacking the C.F.P.B. [Consumer Financial Protection Bureau], undermining new rules to rein in unscrupulous retirement advisers, or rolling back any part of the hard-fought progress we’ve made on financial reform, she and I agree,” Warren wrote in a Facebook post. The two women don’t agree on all Wall Street reform tactics, however: Clinton has criticized Warren’s bill to reinstate Glass-Steagall, saying it would not have prevented the financial crisis.

Warren, a former Harvard Law School bankruptcy professor, has been the face of a grassroots movement calling for Wall Street reform, and her rise in prominence gave voice to national concerns over income inequality. Warren was recruited to run in the 2016 election by Democrats, including a grassroots organization called Run, Warren, Run, but those efforts died down as Sanders’ campaign gained steam.