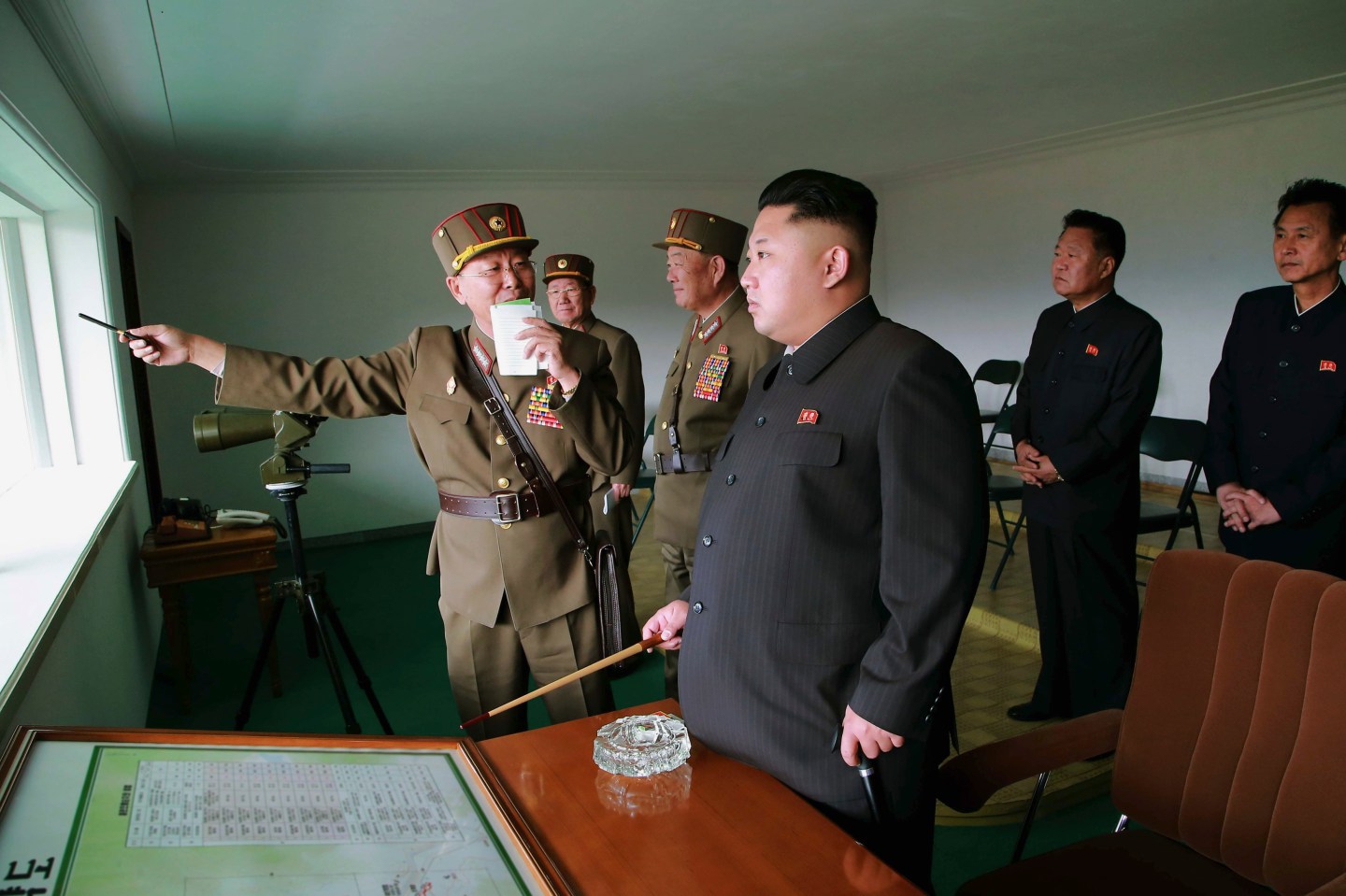 North Korean leader Kim Jong Un (front) attends a military drill between Korean People's Army (KPA) Large Combined Unit 526 and KPA Combined Unit 478 at an undisclosed location in this undated photo released by North Korea's Korean Central News Agency (KCNA) in Pyongyang October 24, 2014. REUTERS/KCNA (NORTH KOREA - Tags: POLITICS MILITARY) ATTENTION EDITORS - THIS PICTURE WAS PROVIDED BY A THIRD PARTY. REUTERS IS UNABLE TO INDEPENDENTLY VERIFY THE AUTHENTICITY, CONTENT, LOCATION OR DATE OF THIS IMAGE. FOR EDITORIAL USE ONLY. NOT FOR SALE FOR MARKETING OR ADVERTISING CAMPAIGNS. THIS PICTURE IS DISTRIBUTED EXACTLY AS RECEIVED BY REUTERS, AS A SERVICE TO CLIENTS. NO THIRD PARTY SALES. NOT FOR USE BY REUTERS THIRD PARTY DISTRIBUTORS. SOUTH KOREA OUT. NO COMMERCIAL OR EDITORIAL SALES IN SOUTH KOREA - RTR4BIWS
Photograph by KCNA/Reuters/file

This story has been updated to include a reaction from Hillary Clinton.

North Korea announced Tuesday it had successfully detonated a hydrogen bomb. Given the strained relations between the totalitarian government led by Kim Jong-un and much of the rest of the world, the news has led to a good deal of consternation—including among the 2016 candidates for president.

“China has total control, believe me,” he said, “They say they don’t; they have total control over North Korea. Without China, they wouldn’t eat.”

Marco Rubio took a similar tact, saying that if the test turns out to be real, “it will be just the latest example of the failed Obama-Clinton foreign policy,” reports Politico.

On her Facebook page, Carly Fiorina focused only on her potential general election opponent: “North Korea is yet another Hillary Clinton foreign policy failure. America cannot lead from behind.”

Rand Paul didn’t focus on Clinton and Obama, instead noting that it was a difficult situation and that “The one thing we have in our favor is that socialism is an abysmal failure,” reports CNN.

On the Democratic side, Bernie Sanders actually agreed with Trump that the U.S. has to get China involved, reports ABC News. Hillary Clinton, meanwhile, said the test was a “provocative and dangerous act” and called for increased sanctions, reported Reuters.