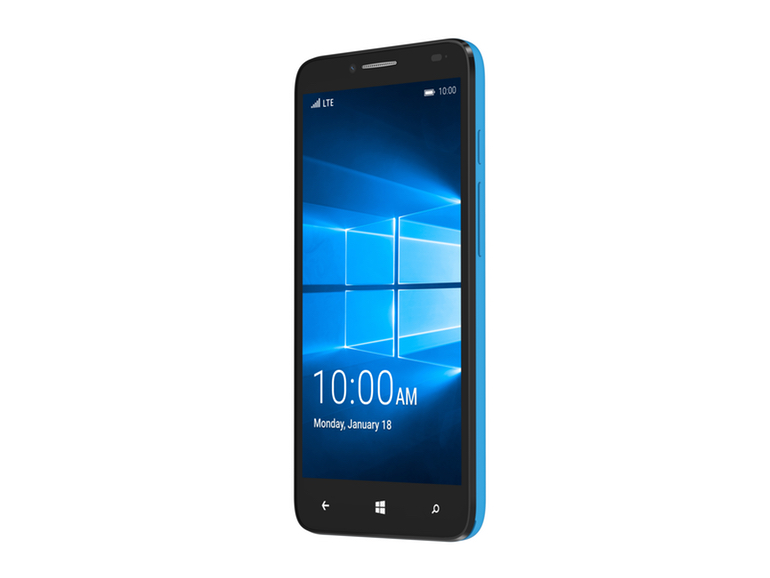 Alcatel OneTouch is a company that’s happy to make a name for itself by selling budget-friendly smartphones.

It’s a strategy that’s more apparent than ever with the debut of the $139 Fierce XL, a 5.5 inch smartphone powered by Microsoft’s (MSFT) Windows 10. It will be the first Windows 10 smartphone sold through T-Mobile (TMUS) starting within the coming weeks, according to the T-Mobile.

Previously, Alcatel OneTouch had set the bar for its entry-level smartphones at a slightly higher prices with its Idol 3 lineup of devices. Those cost $179 and $249, for a 5.5-inch or 4.7-inch display.

Steve Cistulli, president and general manager for Alcatel OneTouch North America, told Fortune the company plans to make announcements about its Idol lineup at the end of February, ahead of Mobile World Congress, a yearly trade show for the mobile industry.

As for the specs, the Fierce XL comes equipped with an 8 megapixel rear camera, 2 megapixel front camera, 2 gigabytes of memory, 16 gigabytes of storage (expandable to 32GB via microSD card), and a respectable 2,500 milliamp-hour battery.

MORE: Here’s What Happened at CES on Monday, in 9 Photos

In terms of software, the Fierce XL will run Windows 10 and include OneDrive cloud storage, Microsoft’s personal assistant app Cortana, and Office Mobile.

T-Mobile customers can buy the Fierce XL outright, or make 23 monthly payments of $5.84 on the company’s equipment installment plan (with the final payment being $5.67) and $0 down.

In comparison, the unlocked version of Microsoft’s Lumia 950 that works on T-Mobile retails for $549.

Cistulli said the company’s goal going into 2016 is to continue its growth in marketshare. He expects the company to have achieved its target of being the fourth largest smartphone vendor (up from the fifth spot) in the North America for 2015.

WATCH: Everything We Expect to See at CES 2016

Another of the company’s goals for 2016 is what Cistulli calls “operating system diversity.” By expanding its lineup to include Windows 10 both on smartphones and tablets, and not only Android, the company hopes to attract more users.

On Tuesday the company also announced a Windows 10 tablet, the Pixi 3. The 8-inch device is equipped with LTE connectivity, and will be priced at $199. Although, it won’t be available in the U.S. initially, it’s currently scheduled to premiere in Europe and Latin America in April of 2016.

Alcatel OneTouch also announced CareTime, a watch for kids that connects to 2G networks in Europe and Latin America. The watch is designed to help parents keep tabs on a child’s whereabouts using an app on his or her smartphone.