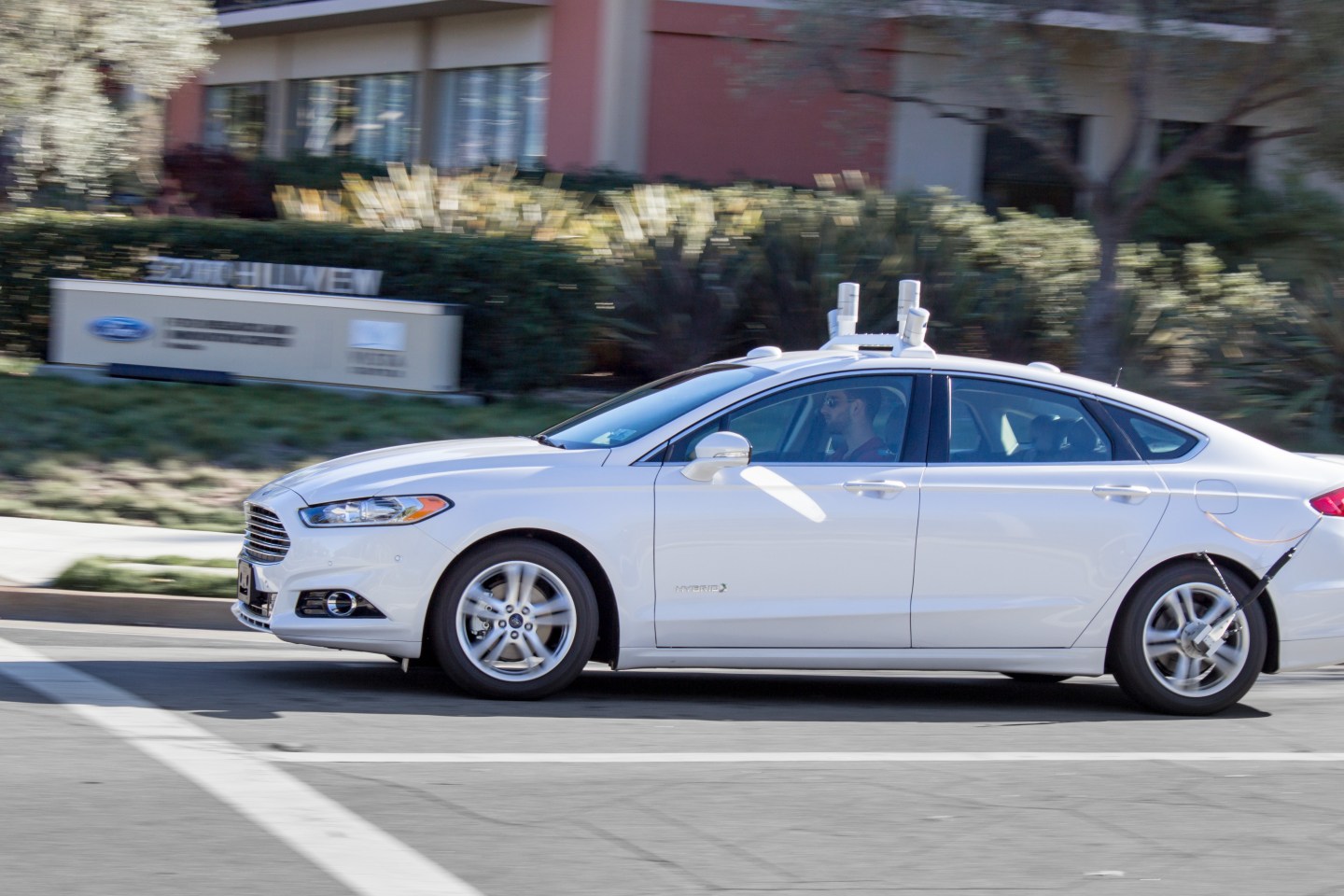 Ford Motor accounts for nearly 6% of the $2.3 trillion auto market involving the sales, financing, and repairing of cars, CEO Mark Fields told Fortune. But he has his eyes on an even bigger prize: The untapped $5.4 trillion market for car-sharing services like Zipcar and ride-hailing service like Uber that are unrelated to conventional car ownership.

“We, as well as the rest of the industry right now virtually get none of that,” Fields said in an interview Monday.

Ford’s announcements at the Consumer Electronics Show in Las Vegas on Monday highlight its push to move beyond being company that merely makes and sells cars. It wants to do a lot more.

The new Fusion hybrids will be equipped with the latest sensor technology from longtime partner Velodyne. The solid state sensors will be smaller—about hockey puck size—and have a longer range of 200 meters in which they can detect obstacles like trees that they car’s computer system would then know to avoid.

“This shows our commitment to getting this type of vehicle in the marketplace,” Fields says. “We haven’t given a timeframe yet, but when we do it we want to make sure that it’s intuitive and right for the market. But, more importantly, that it’s accessible to millions of folks and not just those who buy luxury vehicles.”

The tests are part of Ford’s 10-year autonomous vehicle development program and its so-called Ford Smart Mobility. That initiative, introduced a year ago at CES, involves building cars with additional Internet connectivity, experimenting with the different forms of transportation such as car-sharing as well as using big data analytics like grabbing information from in-vehicle sensors to learn more about how people travel.

Ford is taking a dual path to autonomous vehicle technology. The automaker will continue to add more semi-autonomous features to its vehicles such as helping drivers park and stay in lane on the highway. At the same time, the company’s goal is to get an vehicle on the road that can drive autonomously in most conditions.

The National Highway Traffic Safety Administration defines vehicle automation as having five levels. At Level 0, the driver is completely in control and by Level 4, the vehicle takes over all safety-critical functions and monitors roadway conditions for an entire trip.

WATCH IT: The Chat with Ford CEO Mark Fields

At Level 4, Ford would be in an ideal position to introduce a transportation service business. Think Uber, but more lucrative. Ford’s manufacturing expertise would allow it to build cars designed for specific purposes. A transit van could be deployed in a megacity while a fleet of smaller autonomous vehicles could operate within the confines of a sprawling university like Stanford.

And because Ford builds the vehicle, it also owns the data including fuel economy, maintenance needs, location, and the car’s driving behavior. The company could feasibly take that data and use it to make the cars smarter and more efficient.

Ford’s commercially viable fully autonomous vehicle is still a ways off, Fields told Fortune without providing a specific timeline. For now, it’s focused on building its test fleet and logging as many miles as possible.

Fields wouldn’t comment on a potential partnership with another company, like Google. Recent reports have speculated that Ford and Google were close to announcing a partnership, possibly at CES.

“In some cases, we’ll do things on our own, other times will work with others; it’s about what makes sense for Ford,” Fields says.

If Ford owns the hardware, software, and the data, the question is what will a partner offer?