Now Anyone Can Play Goalie for the New York Rangers 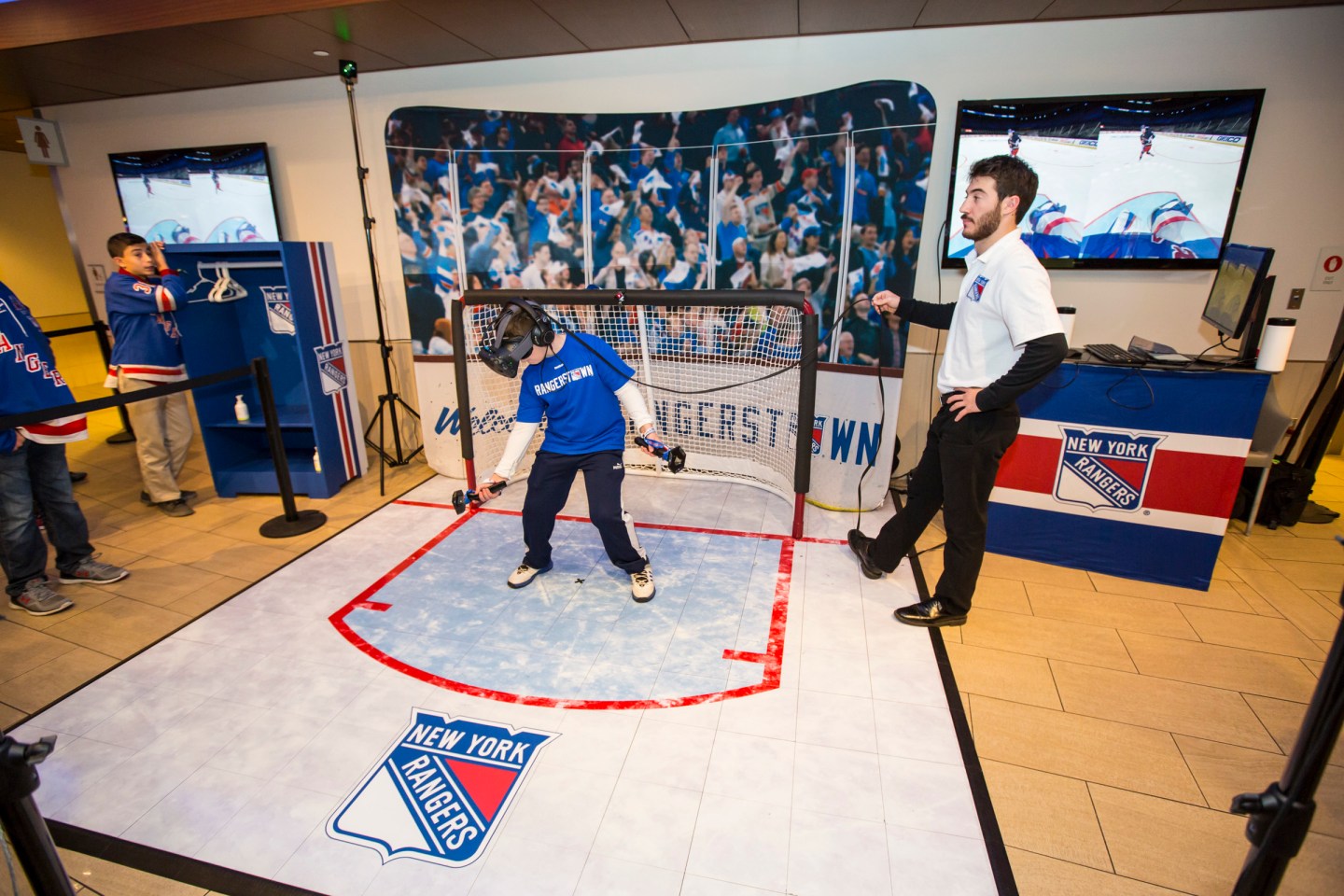 Over the years, only a small group of brave men have had the chance to strap on the pads and blockers and stare down 100 mph slap shots through colorfully decorated hockey masks on the ice at Madison Square Garden. But that’s all changed now, thanks to virtual reality.

Startup STRIVR (sports training in virtual reality) has made it possible for any fan to experience life as New York Rangers goalie Henrik Lundqvist on home ice. The virtual reality company has partnered with Madison Square Garden to create the world’s first virtual reality goaltender simulator.

The experience is located on the main concourse, where guests can put on an HTC Vive head-mounted display and use hand controllers to simulate the goalie stick and blocker pad. They stand in front of a real goal in an area adorned with a simulated ice goalie crease and a fan-filled stadium backdrop with a big-screen TV showing their in-game perspective. But the real magic happens once the two-minute, 360-degree video experience fires up.

The New York Rangers VR goalie simulator, which blends real video with computer-generated effects, is narrated by Rangers broadcaster Sam Rosen. The user puts on the goaltender equipment in the Rangers locker room before heading to the empty arena for practice. It’s here, in goal, that the user will attempt to stop five shots from real Rangers players like Kevin Hayes, Jesper Fast, and Oscar Lindberg. The experience is randomly generated so no five shots will be the same. Afterward, an email sends the fan a photo and his or her stats.

According to Andrew Lustgarten, executive vice president of corporate development and strategy at Madison Square Garden, the arena is always searching for ways to enhance the fans’ experience and invest in new and interesting technologies.

“We believed that implementing this type of immersive, interactive virtual reality game provides that enhanced experience,” Lustgarten says. “This simulator adds another exciting, entertaining element for our fans when attending Rangers games. Additionally, as virtual reality becomes more prevalent at live sports and entertainment events, Madison Square Garden wants its arena to be at the forefront of this technology.”

Derek Belch, CEO of STRIVR, says several other NHL teams are interested in providing fans with customized goalie simulators at their home arenas. He adds it’s popular because it’s an experience fans could never have in real life.

“It’s not hard to replicate, but it does require a little work because we customize the simulator for each team,” Belch says. “We have to work with the team to film their players on the ice for the simulation.”

The Washington Capitals are using the same basic technology that powers the goalie virtual reality experience for training. STRIVR, which focuses on virtual reality training with NFL and college football teams, expanded to the NHL this year.

Brett Leonhardt, the Washington Capitals video coach and a former goalie, says, “We’ve taken STRIVR out during practice for special teams and goaltending, and individual things like shooting. You want to get the camera closest to a player’s visions. We had the players watch the footage in VR. For the goaltenders to watch it and see their own footwork, it’s been great.”

Belch says his company is talking to additional NHL teams to implement virtual reality into their practice routines and preparation.

“With hockey, the goalie makes a lot of sense from a training standpoint based on what he does,” Belch says. “The other positions on the ice are a bit more challenging with VR.”

“STRIVR has made amazing progress in the immersive performance training space in the last year,” Lustgarten says. “As the technology becomes more widespread and as companies like STRIVR develop additional use cases, there will continue to be new opportunities to use VR in sports.”