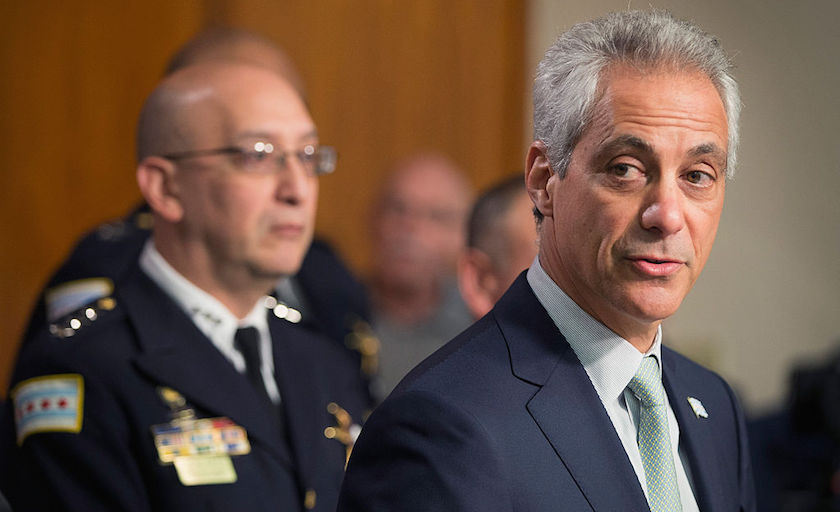 CHICAGO, IL - DECEMBER 30: Interim Chicago Police Superintendent John Escalante (L) listens as Chicago Mayor Rahm Emanuel addresses changes in training and procedures that will take place at the Chicago police department in the wake of recent shootings on December 30, 2015 in Chicago, Illinois. The changes were being announced following the deaths of a 19-year-old college student Quintonio LeGrier and his 55-year-old neighbor Bettie Jones following a domestic disturbance call on December 26. Police claim Jones was killed by accident when officer were shooting at LeGrier who was wielding a metal baseball bat. (Photo by Scott Olson/Getty Images)
Photo by Scott Olson—Getty Images

CHICAGO, Dec 30 (Reuters) – Chicago police will get new equipment and training to help them defuse tense situations and limit their use of lethal force, Mayor Rahm Emanuel said on Wednesday, following weeks of protests calling for him to resign over his handling of fatal police shootings.

The number of Tasers, or electric stun guns that are generally not lethal, for the police department will be doubled to 1,400 so that every patrol unit that goes out at night has one, Emanuel said at a news conference.

“Just because you are trained that you can use force, doesn’t mean you should,” Emanuel said at the news conference, flanked by top officials including interim Police Superintendent John Escalante.

Emanuel ended his Cuba vacation early this week to deal with fallout from the police shooting to death a 55-year-old mother and a 19-year-old college student, whom relatives said had suffered from mental issues.

The Chicago Police Department, already the subject of a federal civil rights investigation over its use of deadly force and other issues, has admitted the woman’s death was an accident.

The latest shootings came after protesters had called for Emanuel’s resignation after a video was released last month showing Chicago Police Officer Jason Van Dyke, who is white, shooting 17-year-old African-American Laquan McDonald in 2014. Van Dyke has pleaded not guilty to murder.

That, and other shootings of black men by police officers over the past 18 months, have led to protests across the country and the issue has fueled a civil rights movement under the name Black Lives Matter.

Chicago police shoot more than 50 people a year, 74 percent of them black, with an average of 17 fatal shootings a year between 2007 and 2014, according to the Independent Police Review Authority, which examines complaints about the Chicago police and all its uses of force.

Escalante said the aim was to discourage aggression and confrontation.

“The goal is to change the way officers think when they approach a critical incident by establishing time and distance to allow for more prudent thinking and physical space to promote a safer environment,” he said.

“We expect that every police officer develops skills and abilities that allow them to help dissolve confrontations by the using the least amount of physical or lethal force necessary,” he said.

The city has already announced it will add more body cameras to police equipment and that officers involved in fatal shootings will be put on a mandatory 30-day period of desk duty, compared with the current three-day policy.

Most U.S. police receive little or no training on how to de-escalate crisis situations involving the mentally ill or people under the effect of drugs or alcohol, despite the growing frequency of such encounters and fatal results in a number of recent cases.

Meanwhile in Cleveland, more protests were planned two days after a grand jury decided not to charge two white police officers in the 2014 shooting death of Tamir Rice, a black 12-year-old boy who was playing in a park with a toy gun that shoots plastic pellets.

Cleveland officials said on Tuesday they will review Rice’s shooting to determine if the officers involved or others should face disciplinary action.

The Chicago police department, with some 12,000 officers, currently has 700 Tasers, which fire dart-like electrodes that incapacitate but are generally non-lethal.

None of the eight police officers at the scene of McDonald’s shooting in 2014 had a Taser, though they had asked for a unit equipped with a Taser to come to the scene.

The turmoil after that shooting led Emanuel to fire the police superintendent and create a task force to review police accountability.

While Emanuel was on vacation, Bettie Jones, 55, and Quintonio LeGrier, 19, were killed on Dec. 26 by an officer responding to a call that LeGrier was threatening his father with a metal baseball bat, another situation that critics said police could have addressed with a Taser.

Tasers can be used at a distance of up to 35 feet (11 meters), depending on the model, and some can also be pressed onto the target’s body without firing the projectiles.

A 2009 evaluation of conducted electrical weapons – the generic name for Tasers – by the Police Executive Research Forum, compared law enforcement departments that used the devices and departments that did not, and found that the former had reduced officer and suspect injuries.

The study did not show an impact on suspect deaths, although the researchers said that could be due to a small sample size.

(Additional reporting by Mary Wisniewski in Chicago and Kim Palmer in Cleveland; Writing by Fiona Ortiz and Mary Wisniewski; Editing by Jeffrey Benkoe and Bill Rigby)