Spain’s Election Results Are a Mess 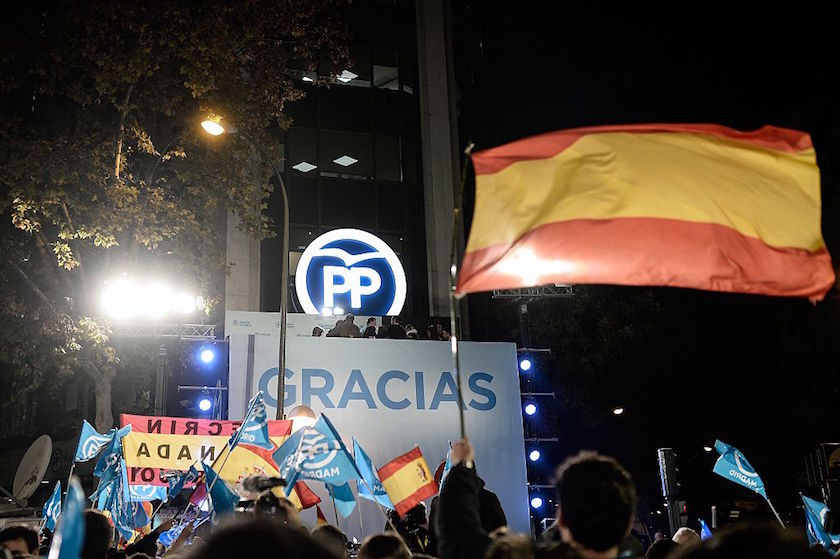 MADRID, SPAIN - DECEMBER 21: People gather as Spanish Prime Minister and Popular Party (PP) leader, Mariano Rajoy (not seen) gives a speech at his party headquarters' balcony after Rajoy's party won the most votes of the General Elections during a public meeting with supporters in Madrid, Spain on December 21, 2015. Spanish citizens went to the polls on 20th of December 2015 to vote for 350 members of the parliament and 208 senators. Popular Party won the elections but failed to reach overall majority. (Photo by Burak Akbulut/Anadolu Agency/Getty Images)
Photo by Anadolu Agency—Getty Images

Specifically, they noted that the Spain was ending its 33-year period with two party rule. Is the Eurozone’s fourth-largest economy threatening to become ungovernable, just as it emerges from a humiliating bailout and its worst economic crisis in over 20 years?

In an election with a turnout of 73%, current Prime Minister Mariano Rajoy’s center-right Partido Popular (PP) won 123 seats in the 350-seat congress, down from the 186 seats it won in the previous elections. Its historic rival, the center-left Social Workers Party (PSOE), ended up with 90 seats, down from 110. And two young parties launched to upend the old order—the leftist Podemos (We Can) and the liberal Ciudadanos (Citizens)—won 69 and 40 seats respectively.

Now comes the difficult part: forming a government that can last. Before the election, it was widely expected that the PP and Ciudadanos together would reach a majority of 176 seats, and that in exchange for enacting some of its labor market and government transparency reforms, Ciudadanos and its head Albert Rivera would allow Mariano Rajoy to continue as Prime Minister.

But Ciudadanos missed expectations, leaving the expected alliance 13 seats short. And on the left, a combination of Podemos and the PSOE falls even shorter. So what happens now?

All signs point to a difficult period of negotiation, followed by either a weak minority or coalition government, or new elections. The problem is that of the 28 seats not accounted for by the four biggest parties—seats that could go toward making a majority—17 are held by parties in Catalonia that want their region to secede from Spain (or at least hold a referendum on the issue). The PP and Ciudadanos are dead set against that idea, and Socialist head Pedro Sánchez has said he “totally” opposes it.

At this point, the electoral math becomes diabolical. Prime Minister Rajoy could form a government with Podemos, a very unlikely partner given that Podemos was founded in order to overthrow the orthodox economics and austerity measures that the PP represents.

The PSOE could get together with Podemos and Ciudadanos, except that Ciudadanos leader Rivera has said he would never govern with Podemos or other parties that would hold a referendum on Catalan independence. (This is a sensitive issue for Rivera, an anti-secession native of Catalonia.)

An equally unlikely option is that the PP and the Socialists could get together and form a “grand pact,” like in Germany. The problem with that is that the two parties have spent their entire existence trying to tear each other down.

To underscore this tense relationship, in their one election debate last week, PSOE head Sánchez made repeated references to corruption scandals surrounding the PP and told Prime Minister Rajoy that the country needed a “decent” leader and he was not one. In response, Rajoy called Sánchez “despicable” and “miserable.”

This complex coalition calculus is unprecedented for Spain, which since 1982 has been governed by either the PSOE or the PP in outright majority or with minor support with regional parties.

But that two-party dynamic was broken when the country’s economic crisis began in 2008. Voters blamed the PSOE for the crisis, as it had been leading the country since 2004. Then, after they elected the PP in 2011, they blamed the conservative party for the austerity measures it put into place to deal with the crisis fallout.

That voter anger only deepened with a series of corruption scandals that have stained both the PP and the PSOE, leading to the arrest of, among others, former PP treasurer Luis Bárcenas.

Podemos and Ciudadanos have taken advantage of that anger, especially among young voters, to present themselves as untainted by corruption and interested in solving the economic problems that millions of Spaniards still face. While Spain’s economy has begun to grow during the last 18 months, unemployment is still over 20% and the GDP has not recovered its pre-crisis level.

In this complicated panorama, the oddest possible governing pact may be no coalition at all. Repeating elections is unlikely to help any party. And acting as an enabler for either of the historic parties would do little to help the upstart parties, which were founded and have sold themselves as a way to remake a clubby, corrupt political order.

It might just be easiest for the PSOE, Ciudadanos and Podemos to abstain when it comes time to vote for Prime Minister, allowing Mariano Rajoy to continue as the head of a weak minority government.

Rajoy would retain power, albeit less, and be able to propose legislation that appealed to a broad spectrum while trying to play the other parties against one another. The other three could mark their differences with the PP to build their own support; avoid alliances that could hurt them with their voters; and use their seats to push policies they supported.

And if it wasn’t working out, the government would fall.

“The next government will be fragile, and the political backdrop is set to become more volatile,” Antonio Barroso, a political risk analyst with Teneo Intelligence, wrote after the vote. “A new election should not be discarded.”

After the results came in, Ciudadanos head Albert Rivera addressed supporters and the media.

“Spain has changed. Enough of a red and blue Spain,” he said, echoing descriptions of the U.S. electorate.

He was right. The percentage of the vote received by the two big parties fell from more than 73% to barely over 50%. But how the mix of colors that comes next functions is far from clear.