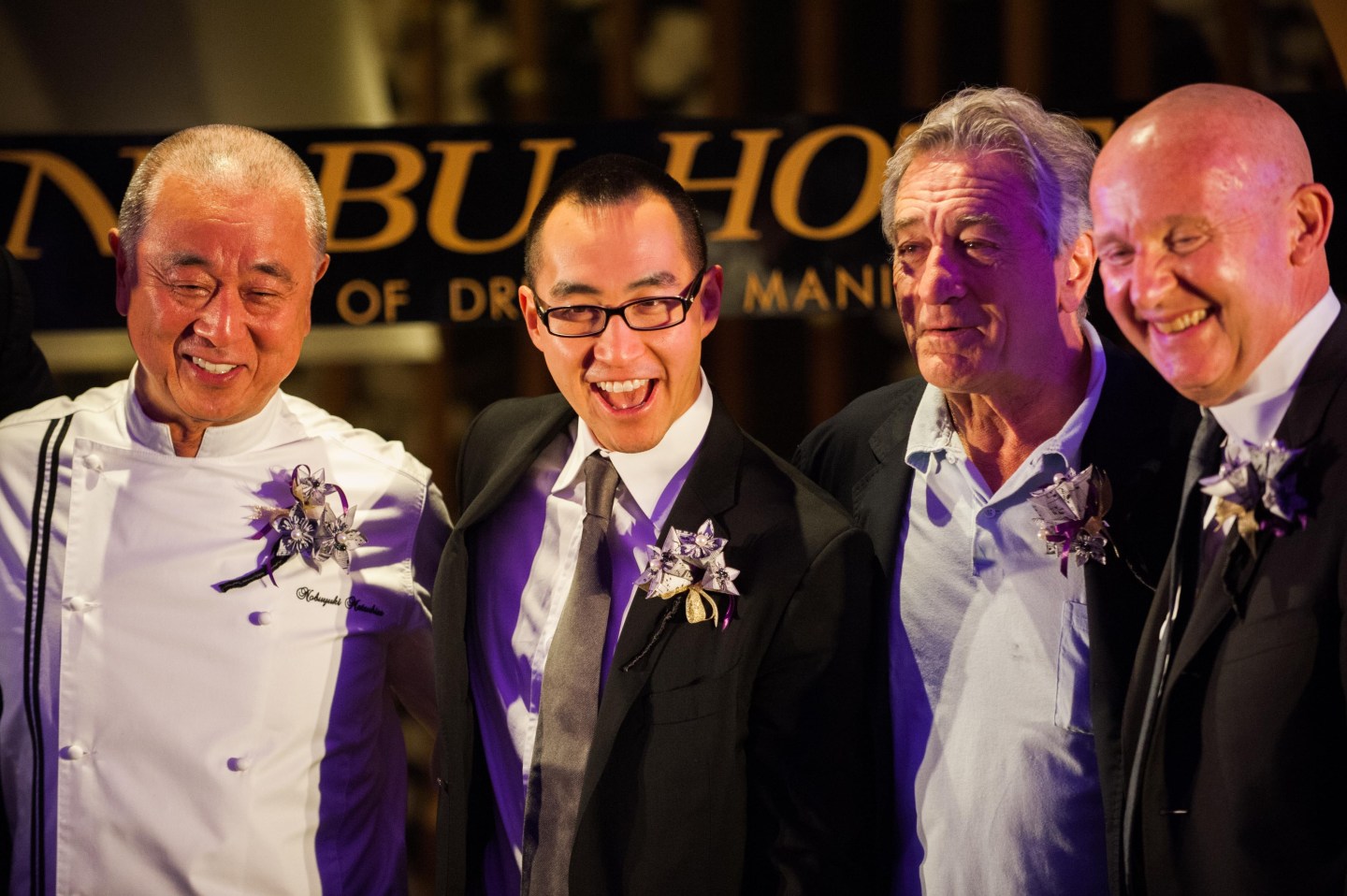 MANILA, PHILIPPINES - MAY 18: Partners in Nobu Hospitality (From L-R) founding Chef of Nobu Restaurant Nobu Matsushita, Melco Crown Chief Executive Officer Lawrence Ho, Academy award winning actor Robert De Niro, and CEO of Nobu Hospitality Trevor Horwell attend the press conference during the official opening of the Nobu Hotel on May 18, 2015 at City Of Dreams in Manila, Philippines. The Nobu Hotel is the very first in Asia ranked among an elite selection of global luxury and hospitality brands and marks the entry of internationally acclaimed hotels in the Asian market. (Photo by Dondi Tawatao/Getty Images)
Photography by Dondi Tawatao Getty Images

In a partnership that seemed destined for greatness, Oscar-winning actor Robert De Niro joined forces with Michelin-starred chef Matsuhisa Nobu to open Nobu Hotel Manila, an opulent new property in the Philippines. However, the slam-dunk of a project has just hit a major problem: The Nobu Hotel was just named 2015’s worst new luxury hotel.

The review comes from from Luxury Travel Intelligence, a members-only high-end travel-rating company. Luxury Travel, a partner of Etihad Airlines, has its reviewers travel anonymously and pay full rates so as to encourage non-biased reporting on hotels, restaurants, spas, and nightlife. “Nobu Hotel Manila was a great disappointment,” the company’s co-founder, Michael Crompton, tells Fortune.com, adding that Luxury Travel also received “negative feedback” on the hotel from some of its members.

For a luxury hotel, the Nobu Hotel Manila is relatively large, with 321 rooms. And Crompton says, “while the accommodations are, in the main, impressive, it seems to be suffering from poor management.” He also said that luxury travelers expect and desire “to experience something special” and this hotel doesn’t deliver it.

Although he notes that Nobu restaurants have been well reviewed by his company and others, he says, “We worry that the Nobu brand maybe overextending itself. The move into hotels is questionable, particularly when they are large properties with hundreds of rooms. Nobu has always been about exclusivity and luxury. Now, new Nobu restaurants tend to be much larger operations and the hotels, so far, seem so far removed from exclusive.”

When reached by Fortune.com, a publicist for the Nobu property declined to comment on the low rating.

Rooms at the five-star property start at $164 for a regular deluxe room and $400 for a Nobu Suite with city views.

Professional travel photographer Guillaume de Vaudrey, who splits his time between Paris and Manila, does not find the Nobu Hotel’s low rating at all surprising, saying, “It is fine for leisure travelers who are fans of casinos. However, it is not at all appropriate for business-minded travelers or high-ranking VIPs who have much better options when in Manila.”

On TripAdvisor, which contains travelers’ reviews, Nobu Hotel Manila was ranked the fourth best out of 13 hotels in Manila. Some of the less-than-stellar reviews complained about rude service.

The first Nobu Hotel opened within Caesar’s Palace in Las Vegas in 2103. CNN Travel dubbed it one of the hottest new hotels. The negative ratings from Luxury Travel Intelligence aren’t a good omen for the team behind the new Nobu Hotel; indeed, they are slated to open eight more luxury properties in the next two years.