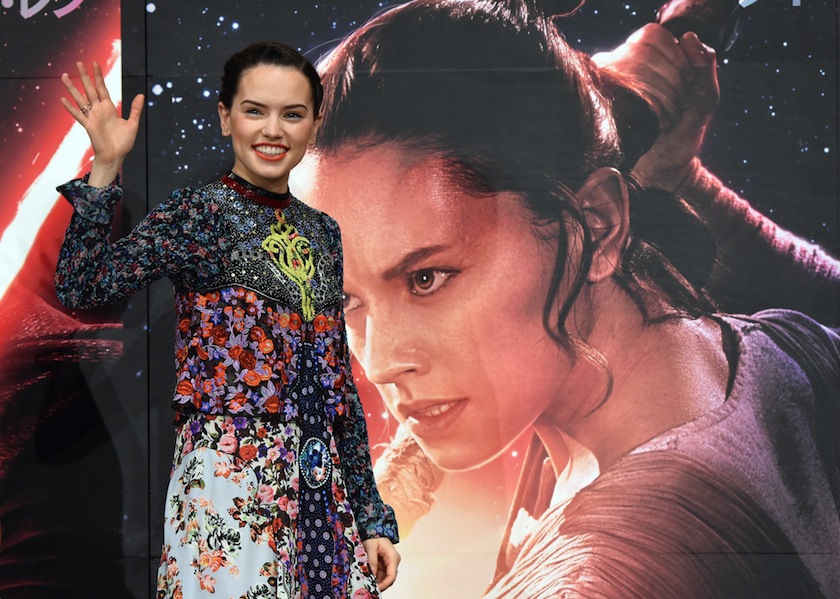 Star Wars actress Daisy Ridley smiles on the cover of Glamour magazine, Stormtrooper necklaces are on sale at Kay Jewelers, and commercials for the new film The Force Awakens are running during Kim Kardashian’s reality TV show.

Walt Disney Co. is reaching out to women and girls to broaden the franchise’s male-dominated audience and help recoup the $4 billion it spent to buy Star Wars producer Lucasfilm. Female fans may determine if Force Awakens meets projections for record-breaking box office returns after it opens Dec. 18.

The casting of Ridley, 23, as the film’s star plus a flood of R2-D2 purses, BB-8 dresses, and other merchandise suggest Disney (DIS) is courting the female young adult audience that turned movies such as The Hunger Games into blockbusters, said Jeff Bock, senior box office analyst at Exhibitor Relations.

“The guys are already in,” Bock said. “If you can get that Hunger Games and Twilight fan base to join up, then you are talking about possibly $700 million domestically, maybe even more.”

Only one film, Avatar, reached that level, selling $760 million worth of tickets in the U.S. and Canada after its December 2009 release. Disney has honed its strategy in recent years, though, with superhero and action franchises.

Stars of The Avengers visited talk shows such as The View, and the sequel, Age of Ultron, had two leading female characters. About 40% of opening weekend audiences was female for both films, according to Shawn Robbins, senior analyst at BoxOffice.com.

In the Force Awakens, Ridley’s character, Rey, was created as a scrappy scavenger and a pilot, not a princess. In movie trailers, Rey battles with a staff-like weapon, not unlike Hunger Games warrior Katniss Everdeen and her bow and arrow. Gwendoline Christie plays the first female villain, Captain Phasma. Actress Lupita Nyong’o has a significant role, and Carrie Fisher is back as Princess Leia, now a general.

“We have female stormtroopers and female resistance pilots,” director J.J. Abrams told Reuters. “There are female voices and energy throughout.” It is important, Abrams said, “that we give people a chance to see themselves in the movie.”

Trailers to promote the film highlight Rey’s prominence. Disney has placed those previews in commercials for females of all ages, according to a person aware of the studio’s marketing plan. That ranges from TV commercials in shows such as Keeping Up with the Kardashians, Jane the Virgin and the Real Housewives series to ads on mobile video games popular with young girls. Force Awakens stars appeared in interviews that aired during Disney Channel shows.

Beyond featuring women, the company appears to be tailoring some of its messages to females, said Alvin Lieberman, a marketing professor at New York University’s Stern School of Business. In a four-minute comedy sketch on Jimmy Kimmel Live, Harrison Ford and Chewbacca resolved a purported feud with an endearing, hug-it-out moment.

“That is not what your high-adrenaline, action-oriented male population is looking to see,” Lieberman said of the video, which has been viewed more than 1.1 million times on YouTube. “It sells the characters.”

And while Rey looks tough in the trailers, the Star Wars women show a feminine side in some promotions. In addition to Ridley appearing on the covers of Glamour and Elle, Nyong’o was on Vogue. None of those magazines put star Natalie Portman on their covers ahead of the last Star Wars film, Revenge of the Sith, in 2005.

For Star Wars, the message is getting through. A National Retail Federation survey found, for the first time, that Star Wars toys ranked among the top 10 that parents would buy for girls this holiday shopping season.

“Even Princess Leia, who was always pivotal and always central, she was not Luke Skywalker,” Cardwell said. “Rey feels like she is the new focal point.”