Australian Police Have Raided the Home of Bitcoin’s Supposed Creator 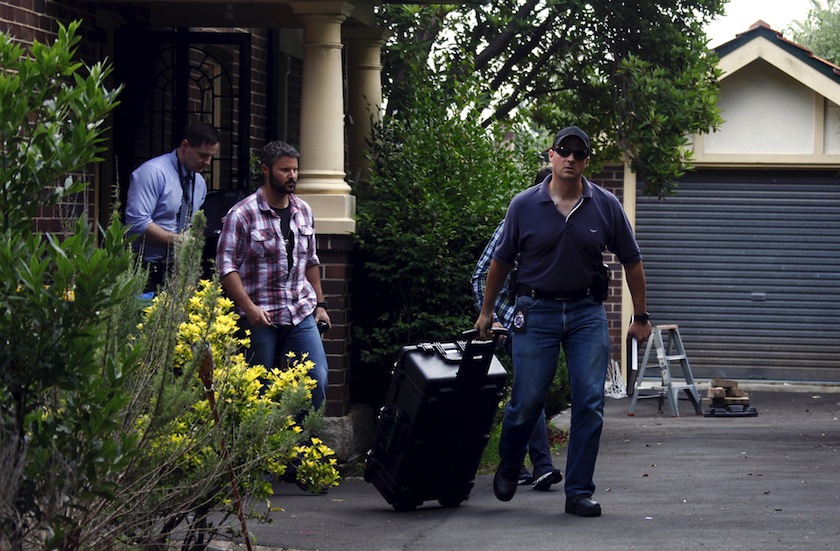 Australian Federal Police officers walk down the driveway after searching the home of probable creator of cryptocurrency bitcoin Craig Steven Wright in Sydney's north shore December 9, 2015. Australian Federal Police raided the Sydney home on Wednesday of the man named by Wired magazine as the probable creator of cryptocurrency bitcoin, a Reuters witness said. The property is registered under the Australian electoral role to Wright, whom Wired outed as the likely real identity of Satoshi Nakamoto, the pseudonymous figure that first released bitcoin's code in 2009. To match Exclusive AUSTRALIA-BITCOIN/ REUTERS/David Gray - RTX1XU7J
Photograph by David Gray — Reuters

On Tuesday, two different technology publications, Wired and Gizmodo, ran big stories pointing to an Australian businessman, Craig Steven Wright, as the possible creator of the digital currency bitcoin. And on Tuesday night (Wednesday afternoon in Australia), Australian federal police raided Wright’s house and office. It was a wild ending to a wild day in bitcoin news.

The Australian authorities said the raids in the Sydney suburbs of Gordon and Ryde were part of a tax investigation and not related to the day’s bitcoin reports. The Australian Taxation Office ordered the police raid, and, according to the New York Times, it has declined to comment. The Australian Federal Police did release a statement in which it said, “The AFP can confirm it has conducted search warrants to assist the Australian Taxation Office at a residence in Gordon and a business premises in Ryde, Sydney. This matter is unrelated to recent media reporting regarding the digital currency bitcoin.”

If it was indeed a coincidence, it is a dramatic one. The creator of the controversial technology went by the pseudonym Satoshi Nakamoto, and over the years multiple media outlets have attempted to unmask the mysterious founder.

In 2014, in its first return to print, Newsweek ran a cover story trumpeting that it had identified Nakamoto as Dorian Nakamoto, a physicist in California. He categorically denied the report, and the magazine defended its reporting, but the story was widely panned. New York University journalism professor Jay Rosen called it a “blown cover story.”

More recently, in his book Digital Gold, Nathaniel Popper, a reporter for the Times, pointed to a different potential Satoshi, an American computer consultant named Nick Szabo. In 1998, Szabo created the blueprint for a bitcoin predecessor called “bit gold” that used some of the same technology, but was eventually supplanted by bitcoin. Szabo “bristled when I cited what was being said about him on the Internet … and the notion that he had created bitcoin,” Popper wrote, but he added that Szabo acknowledged, “There are a whole bunch of parallels.” The man that Wired and Gizmodo have now pointed to, Wright, reviewed Popper’s book on Amazon.

Popper was impressed by the new reporting of Wired and of Gizmodo, but, like many people, not wholly convinced.

. @a_greenberg @samfbiddle The details of the Wright-Satoshi link are very convincing but where I get stuck is the personality

If the Australian raid was for tax reasons, it could still be related to digital currency activities. And the scrutiny around whether Craig Steven Wright is Satoshi Nakamoto is certainly not done yet.