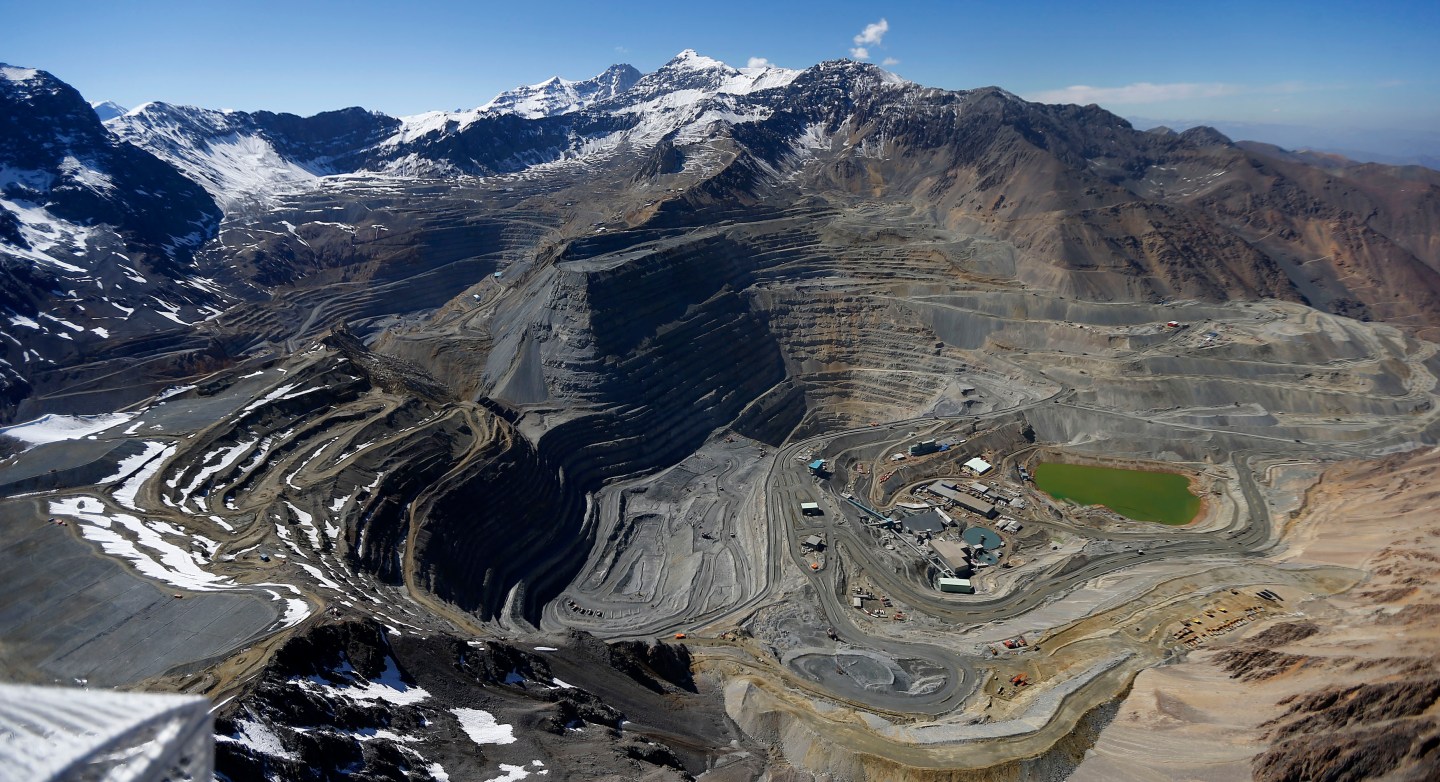 An aerial view of open pits of CODELCO's Andina (L) and Anglo American's Los Bronces (front) copper mines with Olivares glaciers in the background (top) at Los Andes Mountain range, near Santiago city, November 17, 2014. The rock glaciers of the Chilean central zone, a huge source of water for the basins of the capital, are said to be threatened by the environmental impacts of hydroelectric and mining projects, according to environmental activists Greenpeace. Picture taken November 17, 2014. REUTERS/Ivan Alvarado (CHILE - Tags: ENVIRONMENT ENERGY BUSINESS) - RTR4EMQ6
Photograph by Ivan Alvarado — Reuters

2015 will be the year big mining companies want to forget.

That bolder action included scrapping dividends for 2016 and the second half of 2015, sparking a sector-wide sell-off in the stock market on fears that other blue-chip miners will follow suit now that the taboo has been broken.

Anglo, which owns diamond giant De Beers and a host of metal and coal assets, said it will shrink its portfolio by around 60% and shed 85,000 jobs, taking up to $4.7 billion in charges to shut, mothball or dispose of mines that are losing money after a broad collapse in commodity prices this year.

The plan goes way beyond a more modest downsizing that it outlined in July, in which it expected to cut ‘only’ 50,000 jobs.

Anglo’s shares were down 8.9% by lunchtime in London, but Glencore Plc (GLNCY), the world’s biggest miner, wasn’t far behind, losing 8%. The mining sector’s status as a bellwether of global industrial demand made sure that broader stock indexes down in their wake. The London FTSE 30 lost 1.2%.

Anglo’s shares have now fallen by 80% since summer last year, when the economic slowdown in China started to become visible. China is the key consumer of all industrial commodities, accounting for over half of global consumption of some metals.

In addition to the disposals and closures, the company said it will slash another $1 billion from its annual capex budget. That’s on top of the $2.6 billion already cut from its original guidance for 2015-2017. By 2017, it will have more than halved its investment budget from 2014 levels.

Anglo is hoping that the measures announced Tuesday will bring costs down by $3.7 billion between 2013 and 2017.

One bright spot in the company’s presentation concerned its debt level, estimates for which were unchanged despite falling prices for everything from iron ore to diamonds. Along with Glencore, Anglo is one of the more heavily-indebted mining majors, and investors fret that even a slimmed down company may struggle to generate enough cash to service the debts it took on when it seemed that China would buy anything that could be dug out of the ground.