Venezuela Celebrates After the Defeat of ‘Chavismo’ 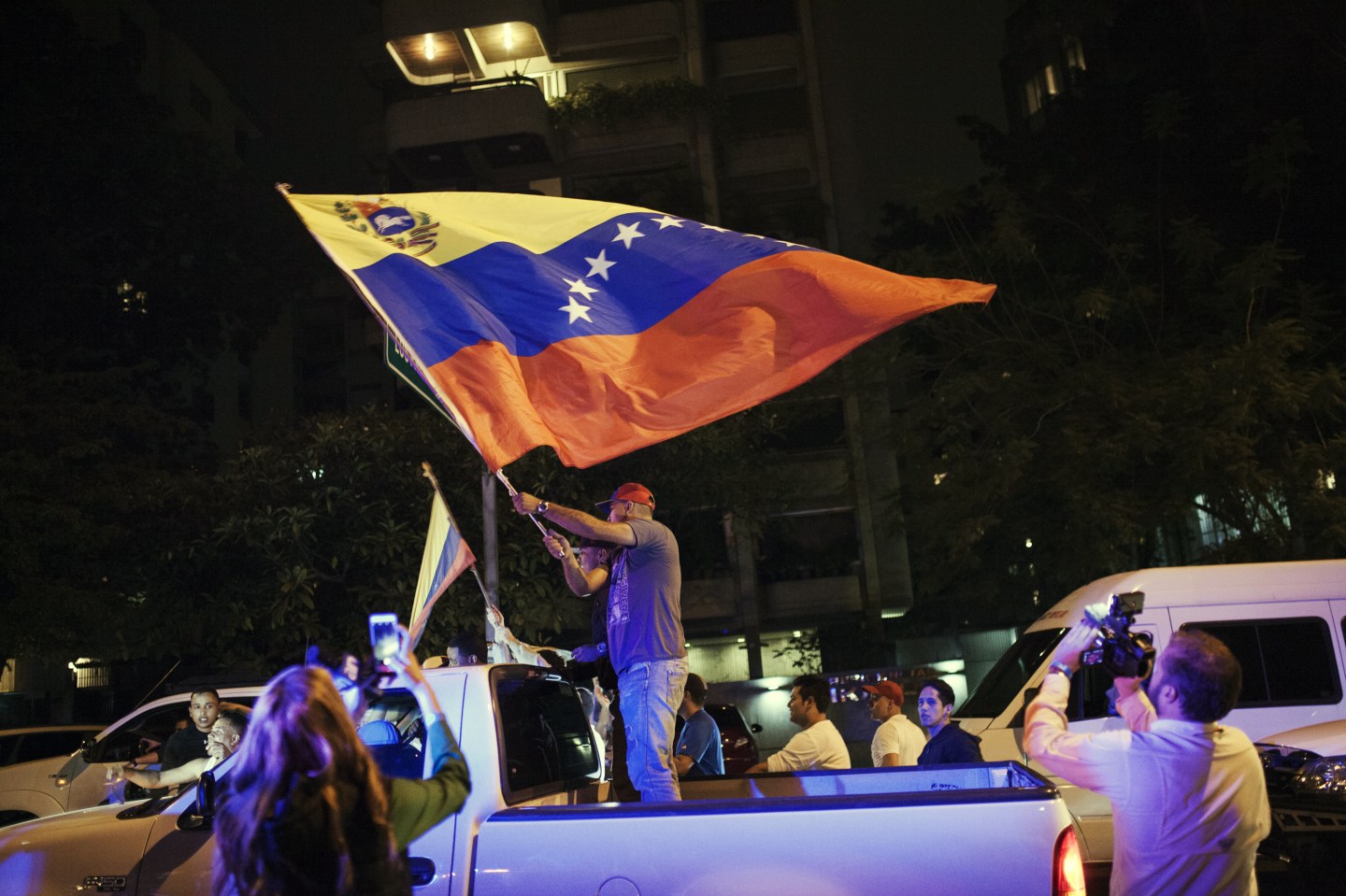 A man waves the Venezuelan national flag while standing in the back of a truck after hearing the results of the national congressional elections in Caracas, Venezuela, on Monday, Dec. 7, 2015. Venezuela's opposition alliance won a majority in Congress for the first time in 16 years in elections on Sunday as an unprecedented recession and a collapse in the bolivar turned voters against the populist policies of President Nicolas Maduro. Photographer: Wilfredo Riera/Bloomberg via Getty Images
Photograph by Bloomberg Bloomberg via Getty Images

Convoys of cars honked their horns throughout the night. Dancers moved to salsa beats blearing out of speakers stacked in plazas under the moonlight. Celebrators draped themselves in Venezuelan flags and leapt up down, some with tears of happiness in their eyes.

The fervent celebrations broke out in many parts of Caracas and across Venezuela in the early hours of Monday morning after the biggest political defeat for the nation’s governing socialist alliance, once headed by the late Hugo Chavez, in 17 years.

In elections for Congress, the opposition Democratic Unity coalition had a landslide victory with a lead of more than 2 million votes, or about 18%, and looked set to have two-thirds of the lawmakers. The passion of the festivities illustrate how many here yearn for change in a country that suffers runaway inflation, shortages of basic goods, and endemic violent crime.

“I am happy, happy, happy, that Venezuela has a new light, a new hope,” says Soraya Molina, a 46-year-old public sector worker, waving a flag and dancing. “I have faith in God, and in this wonderful people we have, who finally woke up. Things have passed that should never have happened in our country.”

Another celebrator, Jaynor Hernandez, 24, said he can hardly remember a time when the socialists, referred to here as the Chavistas, were not in power; he was only seven when Chavez won his first election in 1998. “Things have been terrible. But we can do better,” says Hernandez, a student. “We can get out of this hole we are in now. We shouldn’t have to stand in line for hours just to buy basic stuff.” Hernandez drove round the streets in a car packed with fellow students, shouting in celebration and waving a flag out the window.

When Chavez first won power in 1998, he inspired similarly passionate celebrations as he promised to uplift the poor majority in the hillside slums and sunburned villages of this oil rich nation. Using petroleum wealth to build houses and health clinics, he continued to win election after election and survived an attempted coup against him in 2002, after thousands took to the street in his support. When he railed against the “imperialism” of the United States and declared he was building “twenty-first-century socialism,” he widened his support to the left across the world, even among Hollywood stars.

But while Chavez became a superstar of the international left, his critics say he built an increasingly dysfunctional economic system at home. The government expropriated farms and factories only to see production at them dive. It fixed prices on some basic goods, but many companies stopped producing them. It fixed the exchange rate of the Venezuelan currency to the dollar, only to see its value collapse on the black market. When Chavez died in 2013, his handpicked successor Nicolas Maduro took over just as oil prices dived, plunging the country into crisis. Since then, inflation has hit 84%, the worst in the world, and there have been shortages of goods from chicken to toilet paper.

Chavez and Maduro also used an aggressive class-based rhetoric, polarizing the nation, and clamped down on political opponents. A critical TV station lost its license to broadcast, police have violently shutdown protests and dozens of opposition leaders have been jailed in controversial trials. Amid the economic turmoil and confrontational politics, about a million Venezuelans have left the country in the last decade, many settling in Miami.

Following these political clampdowns, opposition figures said they were wary of electoral shenanigans before Sunday’s vote. However, early Monday morning, President Maduro recognized the opposition victory and promised to work with the new parliament, which will meet in January. Still, he also blamed mysterious dark forces of fomenting Venezuela’s economic crisis for political means. “(Saboteurs) have hidden products from the people. They have put up prices, all for these elections, all to destabilize Venezuela,” he said.

While Maduro’s term is due to end in 2019, the opposition could seek a recall referendum next year to end his term early and force a new presidential election. The opposition-controlled Congress will also be able to fire cabinet members and has promised to pass an amnesty law to get political prisoners out of jail. “Change has come,” Democratic Unity leader Jesus Torrealba said to raucous cheers in the campaign HQ. “All those of who have been unfairly persecuted, imprisoned or exiled, we promised to return their rights.”

Still, it could take some years to fix Venezuela’s economic problems and bring the divided nation closer together. Even despite the crisis, millions voted for the socialist party, showing the deep support for the Chavistas in parts of the nation. Many fear losing welfare benefits if the opposition take power. “The rich here never care about the poor. They don’t like the poor,” says Mariana Navarro, 71, who voted for the socialists in a working class Caracas district. “With the rich in power, things would only get worse.”