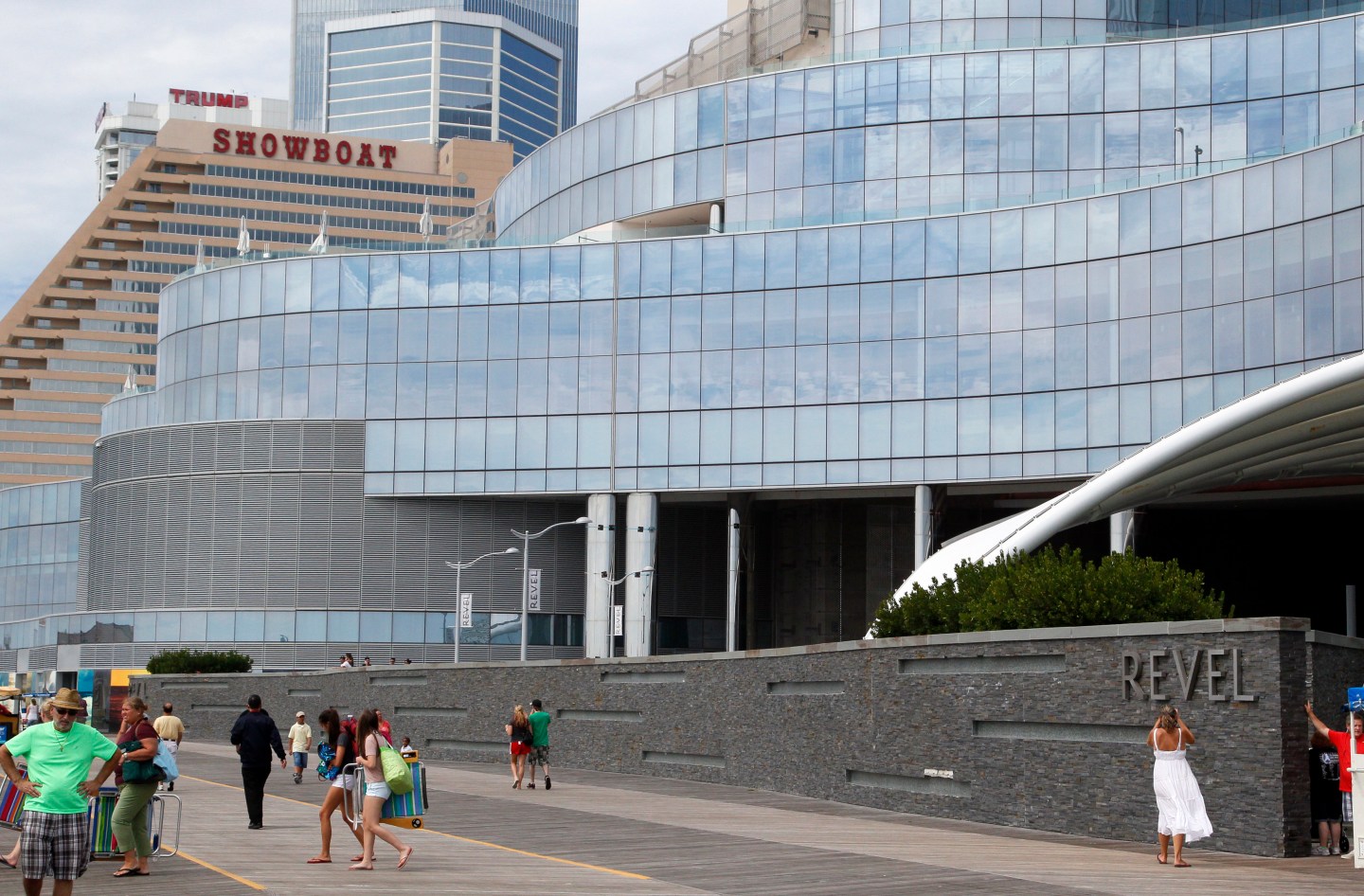 People walk outside the Revel Casino Hotel in Atlantic City, New Jersey September 1, 2014. Four Atlantic City casinos are closing this year, but not all of their gamblers will return to visit eight others that have survived in the down-on-its-luck New Jersey resort. A third of Atlantic City's casinos have closed or soon plan to. The city's newest casino and arguably its biggest failure, the $2.4 billion Revel Casino Hotel, is in its second bankruptcy after opening in 2012. It is closing on Tuesday. The Showboat Casino Hotel (L, background), a Caesars Entertainment Corp property, was shut down on Sunday morning, and Trump Plaza Hotel (L background) and Casino is due to close in mid-September. Atlantic Club Casino Hotel was shuttered in January. REUTERS/Tom Mihalek (UNITED STATES - Tags: BUSINESS) - RTR44K1R
Photograph by Tom Mihalek — Reuters

Atlantic City and its surrounding New Jersey area have generated plenty of woeful economic news lately. But on Monday, new statistics showed that the city had the biggest drop in its unemployment rate of all U.S. metropolitan areas year-over-year in October.

Atlantic City’s preliminary jobless rate fell 2.5 percentage points to 7.7% in October, according to the U.S. Bureau of Labor Statistics. The data are not seasonally adjusted.

By comparison, the overall U.S. unemployment rate is 5%.

Four casinos closed last year in Atlantic City, leading to thousands of job losses and to foreclosures. Nearby restaurants have complained that business is slower as some former casino employees, still without work, cut back on spending.

The struggling gambling hub posted the highest U.S. metro foreclosure rate in October for the fourth month in a row, according to RealtyTrac.

Atlantic County, where the city sits, also lost a higher percentage of jobs in 2014 than any other big county in the United States, according to the BLS.

The lower October unemployment rate for the Atlantic City-Hammonton area, which is roughly the same geographical area as Atlantic County, is partly due a drop in the overall labor force, said BLS economist Bruce Bergman.

“It’s not a huge difference, but it does show that the dramatic improvement in the unemployment rate hasn’t been offset by similar gains in employment,” he said.

Some industries have added jobs in Atlantic City, including construction, he said.

Nationally, unemployment fell in October compared with a year earlier in 337 of the 387, or 87%, of the metropolitan areas covered by BLS.

The unemployment rate for El Centro, California, also fell by 2 percentage points in October. The biggest rate increases were in Odessa, Texas and Farmington, New Mexico, which rose by 1.7 and 1.6 percentage points, respectively.