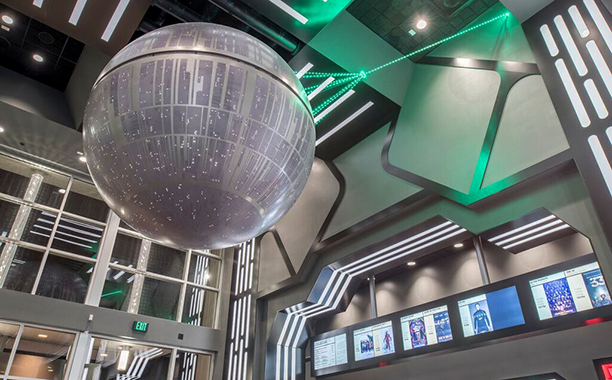 If you woke up this morning believing there’s no particular reason to envy moviegoers in Omaha this month, think again!

The Alamo Drafthouse cinema chain has just opened a Star Wars-themed movie theater in the Nebraska city, presumably the country’s first. Among the features: a 10-foot Death Star hanging in the lobby, complete with green superlaser (image above).

Plus Imperial signage. This is indeed the lobby you’re looking for.

And the Emperor’s throne. You can actually turn on the lobby’s fully operational Death Star using the controls. You want this, don’t you? Goooood.

“The idea behind the lobby is that we wanted to construct and install a lobby theme that would make us unique in our Omaha market as well as the midwest,” said the Alamo’s Omaha team in a statement to EW. “We also wanted a theme that was built around an iconic film and to completely own that theme to immerse our guests in the experience. That is when Star Wars came into the picture and it just so happened that we timed it out just right with the announcement of the huge plans for a new Star Wars legacy starting this December. It is a permanent installation and will be thee destination to see all of the new Star Wars films.”

The design, construction and installation was done by Dimensional Innovations out of Kansas City.

This piece was originally published on EW.com.

TV Jukebox: 6 songs to remember from TV this week

For more on Star Wars, watch this Fortune video: