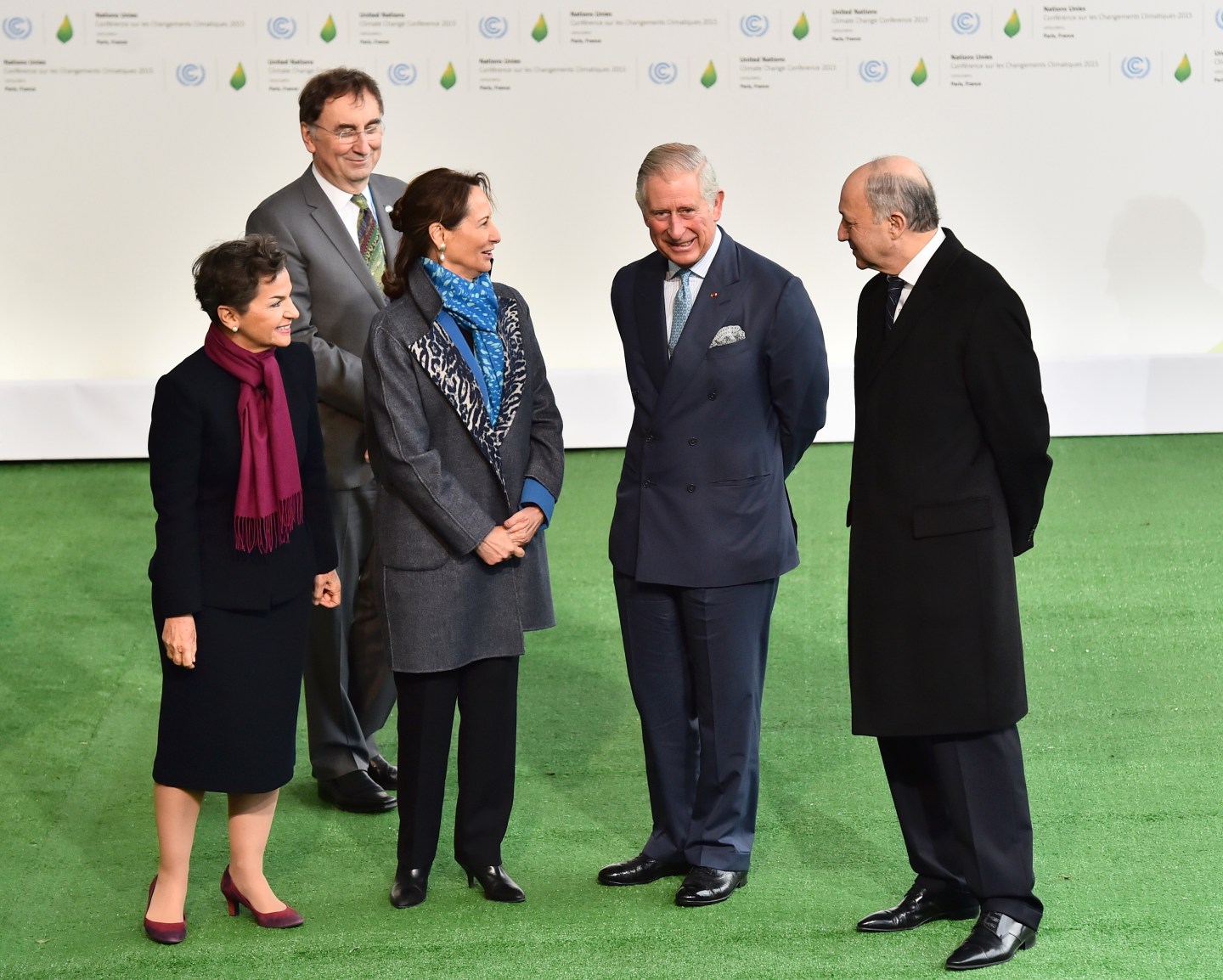 UN climate chief Christiana Figueres (L), French Minister for Ecology, Sustainable Development and Energy Segolene Royale (3rd L), and French Foreign Minister Laurent Fabius (R), greet britain's prince Charles, upon his arrival for the opening of the UN conference on climate change, on November 30, 2015 at Le Bourget, on the outskirts of the French capital Paris. More than 150 world leaders are meeting under heightened security, for the 21st Session of the Conference of the Parties to the United Nations Framework Convention on Climate Change (COP21/CMP11), also known as Paris 2015 from November 30 to December 11. Man at back is unidentified. AFP PHOTO / POOL/ LOIC VENANCE / AFP / LOIC VENANCE (Photo credit should read LOIC VENANCE/AFP/Getty Images)
Photograph by Loic Venance — AFP/Getty Images

Prince Charles is the latest public figure to identify climate change as having contributed to the unraveling of stability in Syria, leading to the havoc we see beyond its borders today. He joins the ranks of other national and world leaders, including President Obama, who have linked climate change to the turmoil in Syria.

And as the Paris climate negotiations continue this week, this case should be an example for those looking to see the visible effects of climate change and natural disasters on fragile societies. Prince Charles, Secretary Kerry, President Obama and many others were spot on when they recognized that a drought made more severe by climate change, occurring in a country already heavily strained, was one important factor contributing to the onset of the Syrian war.

As the authors of one of the key scientific papers underpinning this claim, we wish to summarize this case to the reader: After decades of water mismanagement and inefficient farming practices, Syria experienced a drought from 2007-10 more severe than previously seen. Those in the country’s breadbasket region of the northeast were largely crippled by crop failure, and the persistence of the drought forced many to relocate from their rural villages to the outskirts of Syria’s cities.

Many of these urban areas were experiencing a recent influx of Iraqi refugees, who were fleeing their own hardships. The peripheries of these cities were mazes of illegal settlements and severe overcrowding, with poor infrastructure, deep unemployment, and rampant crime; these areas were also utterly neglected by the Assad regime. The permanence with which these newly disenfranchised populations migrated is also telling of the extreme situations from which they fled, be it war or drought. Discontent festered until the flashpoint in Dara’a in March 2011, igniting into a conflict that unbeknownst to many, soon became a raging civil war.

While we cannot say that this drought was surely caused by manmade climate change, we do know that this severe of a drought was made two to three times more likely by the greenhouse gases humans have added to the atmosphere. Our conclusion is supported by 1) climate observations of the past 80 years, which show a downward trend in rainfall and an upward trend in temperature (telltale causes of drought); 2) climate modeling, which predicts that the region dries as the greenhouse gases in the atmosphere increase; and 3) theoretical results showing that this region will be increasingly dominated by atmospheric motions that inhibit rainfall.

Climate change greatly increased the chances of extreme drought, but let us be clear in saying the drought in Syria was not the sole cause of the uprising. It was an additional stressor that made the pre-existing bad situation in Syria even worse. As our paper describes:

“The migration in response to the severe and prolonged drought exacerbated a number of the factors often cited as contributing to the unrest, which include unemployment, corruption, and rampant inequality. The conflict literature supports the idea that rapid demographic change encourages instability. Whether it was a primary or substantial factor is impossible to know, but drought can lead to devastating consequences when coupled with preexisting acute vulnerability, caused by poor policies and unsustainable land use practices in Syria’s case and perpetuated by the slow and ineffective response of the Assad regime.”

Climate change need not need to be the only factor implicated in a conflict for it to matter. Authorities who are unwilling or unable to recognize the societal impacts of climate change are also likely to be unresponsive to alleviating other economic, political or societal stressors and, when put together, this can result in the sort of instability seen in Syria.

Mark Cane, Richard Seager and Yochanan Kushnir are professors at Columbia University’s Lamont-Doherty Earth Observatory. Colin Kelley is a postdoctoral research fellow at the University of California, Santa Barbara. Shahrzad Mohtadi is a graduate of Columbia University’s School of International and Public Affairs.