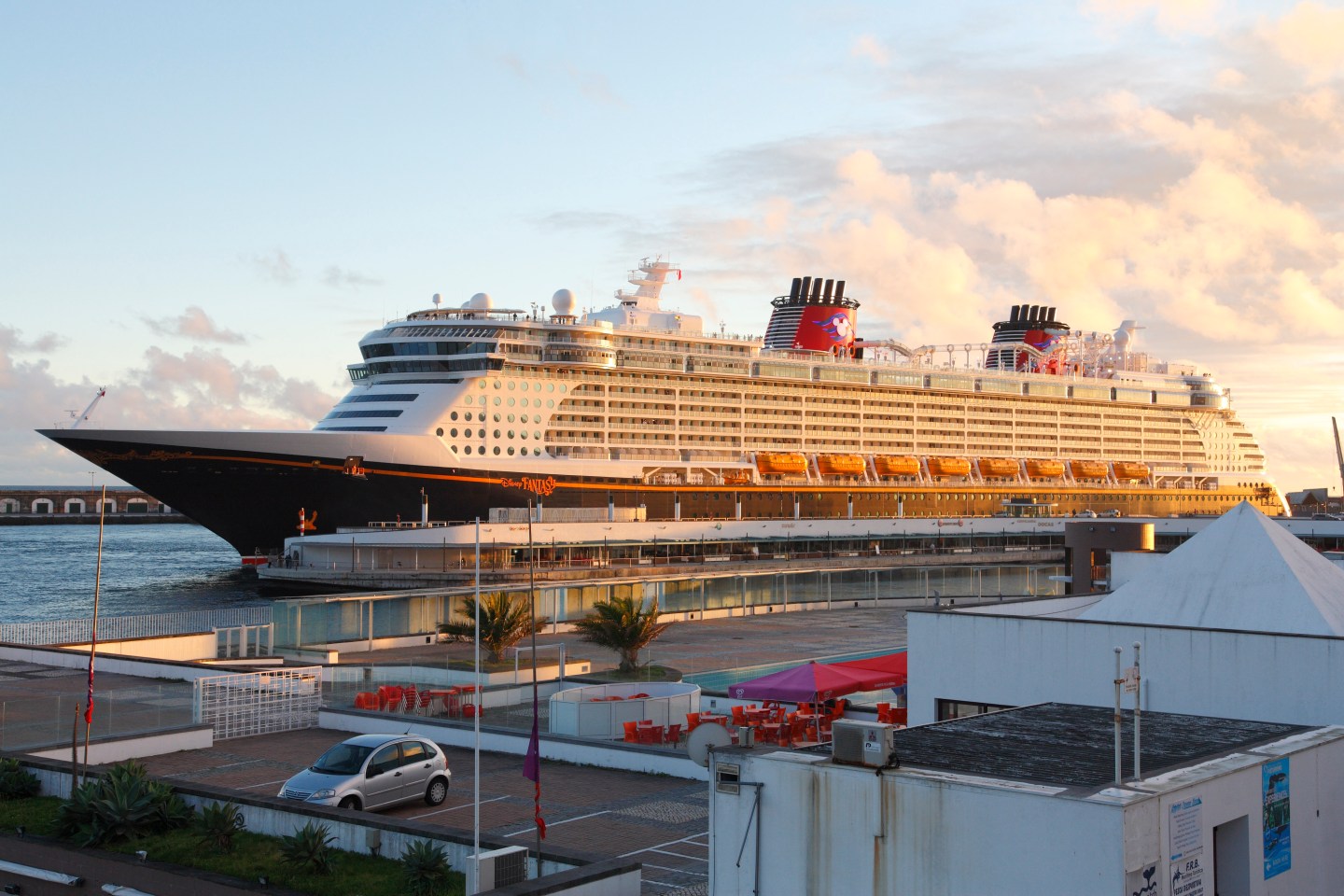 The Disney Fantasy at Sao Miguel island, Azores, for a technical stop-over before being christened. (Photo by: myLoupe/Universal Images Group via Getty Images)
Photograph by MyLoupe UIG — Getty Images

A spokeswoman for the Federal Bureau of Investigation said that Héctor Trujillo, 62, was arrested by U.S. Customs and Border Protection agents who went to his cabin door.

Another law enforcement source said Trujillo was on a Disney cruise ship docked at Port Canaveral, Florida when he was arrested. Trujillo was scheduled to appear in federal court in Orlando at 3:30 p.m. ET (2030 GMT), a court official said.

A lawyer for Trujillo could not immediately be contacted for comment.

Soccer bosses from across South and Central America, including Trujillo, were among 16 people charged on Thursday by U.S. prosecutors with bribery and kickback schemes amounting to more than $200 million for marketing and broadcast rights to tournaments and matches. The total number of indictments is now 41 in a probe spanning dozens of countries.

FIFA is in the throes of an unprecedented crisis with criminal investigations into the sport under way in the United States and Switzerland. Its president Sepp Blatter is among officials who have been suspended by its own ethics committee.

At FIFA headquarters in Zurich on Friday, FIFA executive committee members Juan Angel Napout of Paraguay and Alfredo Hawit of Honduras were suspended from soccer for 90 days after their arrests at hotel in the city on Thursday morning.

Ironically, the pair traveled to the Swiss capital to attend an executive committee meeting to discuss reforms, and seven months after a first round of arrests and charges.

Napout is president of the South American Football Confederation (CONMEBOL) and Hawit is head of the CONCACAF confederation that runs the sport in North, Central America and the Caribbean.

At a news conference in Washington on Thursday, U.S. Attorney General Loretta Lynch said the corruption allegations against Trujillo presented a contradiction with his position as a judge on Guatemala’s top court.

Trujillo, the secretary general of the Guatemalan soccer federation, was “purportedly dispensing justice by day while allegedly soliciting bribes and selling his influence within FIFA,” Lynch said.

The indictment charged him with soliciting and accepting two bribe payments from Media World, an affiliate of Spanish media company Imagina Group. One payment was a “six-figure bribe” to be split among Trujillo and two other Guatemalans for media and marketing rights for 2018 World Cup qualifier matches, the indictment said.

The two other men, Brayan Jimenez and Rafael Salguero, were also indicted. Jimenez was arrested in Guatemala City on Friday, officials said.

The second payment was a $200,000 bribe that Trujillo and Jimenez split in exchange for media and marketing rights to 2022 World Cup qualifier matches, the indictment said. Meetings about the bribes took place in Miami.

At a meeting in Chicago on July 9, weeks after a first round of soccer-related arrests, Trujillo openly discussed how he hid the bribe payments, the indictment said. Trujillo said at the meeting “that he did not think the payment would appear suspicious, as a sham contract had been created,” the court document said.

Thursday’s arrests and charges overshadowed the FIFA executive committee’s approval the same day of a package of reforms to clean up the scandal-ridden organization. There was more concern for FIFA on Friday when Europe’s powerful clubs criticized the reforms.

The European Club Association, which represents more than 200 clubs including big names such as Real Madrid, Barcelona and Bayern Munich, said members were “not prepared to be further ignored” after they were not involved in the FIFA Reform Committee.

Also on Friday, one person was detained and the accounts of three members of Ecuador’s football federation, including president Luis Chiriboga, were frozen by the country’s state prosecutor on Friday as part of the U.S. investigations.

Imagina Group said in a statement that it would cooperate fully with U.S. judicial authorities.

Nike Inc was another company that said it was cooperating with authorities over a 1996 sports marketing contract with Brazil. Top Brazilian soccer officials were among those named in the indictment on Thursday with the bribery and kickback schemes.

“There is no allegation in court documents that any employee was aware of or knowingly participated in any bribery scheme,” Nike said in a statement.