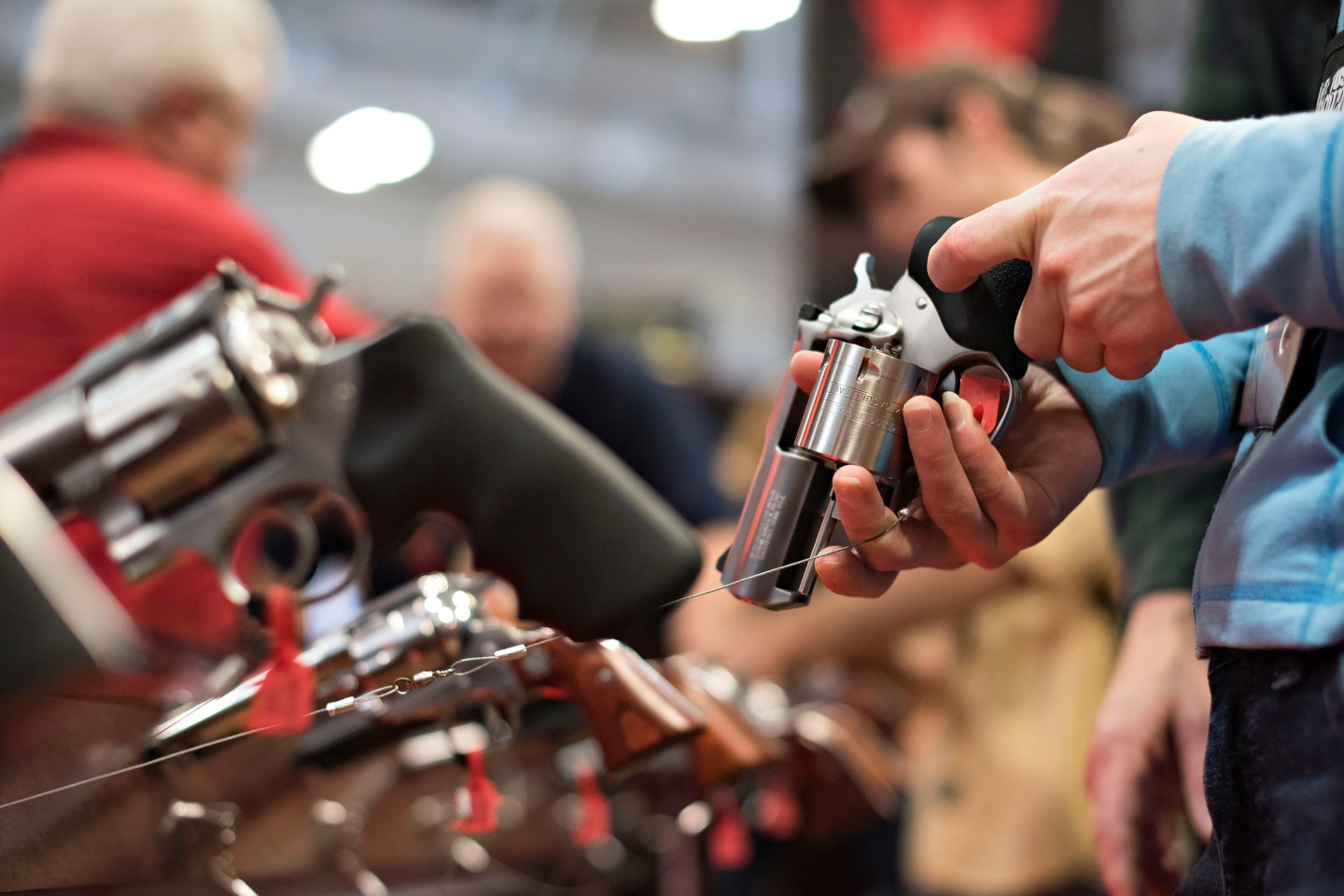 An attendee handles a revolver in the Sturm, Ruger & Co., Inc. booth on the exhibition floor of the 144th National Rifle Association (NRA) Annual Meetings and Exhibits at the Music City Center in Nashville, Tennessee, U.S., on Saturday, April 11, 2015. Top Republican contenders for their party's 2016 presidential nomination are lining up to speak at the annual NRA event, except New Jersey Governor Chris Christie and Kentucky Senator Rand Paul, who were snubbed by the country's largest and most powerful gun lobby. Photographer: Daniel Acker/Bloomberg via Getty Images
Photograph by Daniel Acker — Bloomberg via Getty Images

In the wake of Wednesday’s shooting in San Bernadino, Calif., the world, especially those on social media, was once again engulfed in the gun control debate.

One point of controversy focused on the many people on Twitter, especially politicians, who sent out prayers to the victims. Some, particularly those within the political left, expressed that praying over shootings wasn’t enough, especially in the absence of meaningful legislation designed to address the problem of gun violence. This sentiment was illustrated vividly in the cover of Wednesday’s New York Daily News, which proclaimed boldly that “God Isn’t Fixing This.”

One reporter, though, took the argument even further. Igor Volsky, a contributing editor at Think Progress — an independent editorial site sponsored by The Center for American Progress Action Fund, a progressive think tank — took a look at all the politicians tweeting out their prayers and figured out how much money each elected official had received from the National Rifle Association. A few examples are below:

NRA dumped $922K into McConnell's re-elect bid, so when it comes to preventing gun violence all u get is this tweet https://t.co/RsSvFRDlZr

Got $1,651 from NRA during the 2012 election cycle. Unlikely to address gun problem beyond "heartbreaking" tweet https://t.co/uhfsiBmegm

Got $2,000 from NRA during 2014 election to help #SanBernadino and all future gun violence victims by "praying" https://t.co/MQDffa7rhN

Got $7,450 from NRA during the 2014 election cycle to address gun violence by "praying for peace" https://t.co/RsVMK3u2ju

All in all, Volsky found that in 2012 the NRA spent $19.7 million on candidates who tweeted “thoughts and prayers” after the San Bernadino shooting.

According to OpenSecrets, a site that tracks money in politics, the NRA spent $984,152 on campaign contributions during the 2014 election cycle. It also spent more than $3 million on lobbying in both 2013 and 2014. The NRA also spent $28,212,718 on outside political contributions during this period, which includes ads paid for directly by the NRA. That makes it the tenth biggest spender when it comes to such political spending.