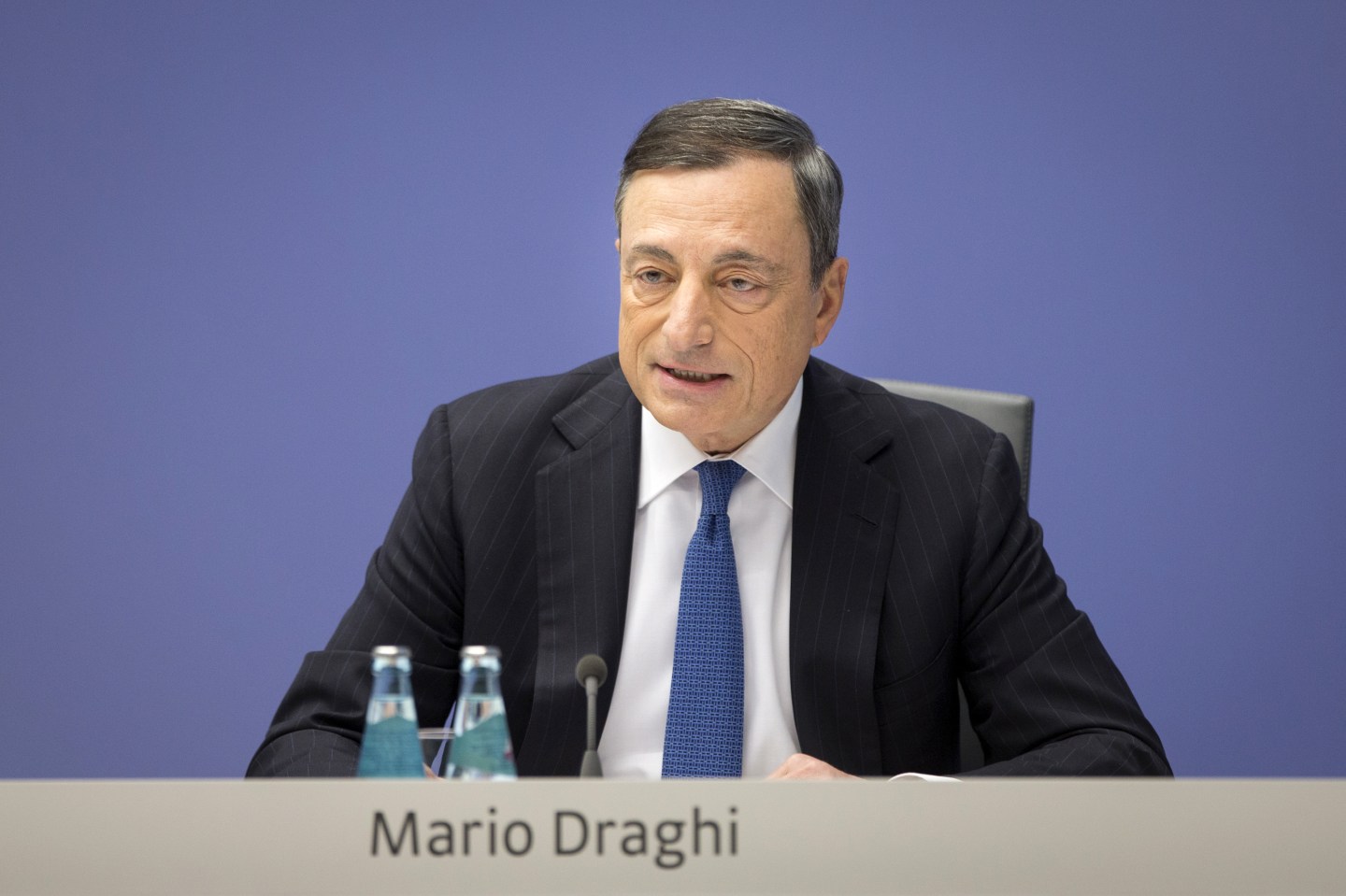 Mario Draghi, president of the European Central Bank (ECB), speaks during a news conference to announce the bank's interest rate decision at the ECB headquarters in Frankfurt, Germany, on Thursday, Dec. 3, 2015. The euro dropped the most in almost two weeks versus the dollar as investors braced for a European Central Bank meeting Thursday that economists said will result in policy makers expanding monetary stimulus. Photographer: Jasper Juinen/Bloomberg via Getty Images
Photograph by Jasper Juinen — Bloomberg via Getty Images

Stock markets fell sharply and the dollar posted its biggest intra-day loss against the euro since 2009 after the European Central Bank’s latest stimulus measures failed to live up to expectations.

European markets though were hit harder than the U.S. At mid-day the S&P 500 was down just less than half a percentage point. The benchmark Euro Stoxx 50, however, lost more than 3% in the wake of the ECB’s decisions and President Mario Draghi’s subsequent press conference.

With Federal Reserve Chair Janet Yellen guiding markets to expect only modest and gradual raises in interest rates in the U.S., the chance of the dollar now hitting parity against the euro for the first time in 12 years is now looking slim, analysts say. Marc Ostwald, an analyst with ADM ISI in London, said he gives it no more than a 15%-20% chance of happening within the next six months.

Today’s volatility is an object lesson on the importance of communication for central bankers, whose words carry immense weight in financial markets. It’s also a rare debacle for Draghi, a usually assured communicator who had, after all, effectively saved the whole single currency project with a single phrase back in 2011 (“within its mandate, the ECB will do whatever it takes to preserve the euro.”)

The reason for the sell off was that the ECB delivered far less in actual monetary stimulus than it had guided markets to expect in the weeks leading up to today’s meeting of its policy-making council, expectations stoked by Draghi himself in a speech two weeks ago.

The Frankfurt-based bank chose not to increase the amount of monthly bond purchases in its quantitative easing program from the current €60 billion; and the 0.1% cut in its official discount rate was smaller than hoped for.

What the bank did deliver was dismissed as immaterial, because its effects will only be felt in the distant future. It broadened the eligibility criteria for bonds in the QE program to include local and regional government debt; it said that it will continue QE for six months more than previously stated (until at least March 2017); that it will reinvest the proceeds of any bonds in its QE portfolio that mature; and that it will won’t ration liquidity until the end of 2017. But none of those measures has an immediate impact on today’s market conditions.

The one measure it took that will have an immediate impact was also more modest than markets had hoped. The ECB cut its deposit rate, which forms an informal floor to money market rates in the Eurozone, by 10 basis points (0.1%) to a new record low of -0.3%. That increases the penalty on banks for holding excess reserves at the central bank (instead of, say, lending it out to businesses or buying foreign currency with it).

The trouble is, many of the Eurozone’s banks, particularly in Germany, are so risk averse that they would largely lose a certain 0.3% a year on their cash than risk bigger losses by putting it to use anywhere else. The amount parked in the ECB deposit facility has more than doubled to €184 billion since the ECB first pushed the deposit rate below 0%.

In cutting the deposit rate by only 0.1%, the ECB limits the amount that rates can fall on the wholesale money market. As a result, U.S. dollar rates won’t open up too much of a premium over euro ones even with a Fed rate hike later this month. And without a clear interest rate premium, there is less incentive to sell euros in order to buy dollars. Anticipation of such a premium opening up had been the driving force behind an 8% drop in the euro between October and today’s decisions.

The ECB’s measures may have disappointed Wall Street, but a look at recent Eurozone data begs the question why Draghi and his cohorts went to such lengths to raise expectations in the first place. Unemployment is at its lowest in close to four years, systemic risks such as those coming out of Greece or Russia have receded, inflation has stopped falling, and survey data suggested a decent start to the fourth quarter. Credit is finally starting to grow again (even if, as the deposit facility numbers show, the number of attractive borrowers isn’t keeping pace with the increase in liquidity provided by the ECB). When the ECB published its forecasts for growth for the next two years today, they were no worse than those of three months ago.

Draghi said today’s measures “need time to be appreciated” properly by markets, but stressed that they will support the economy by guaranteeing that monetary conditions will be loose “for a long, long time.”