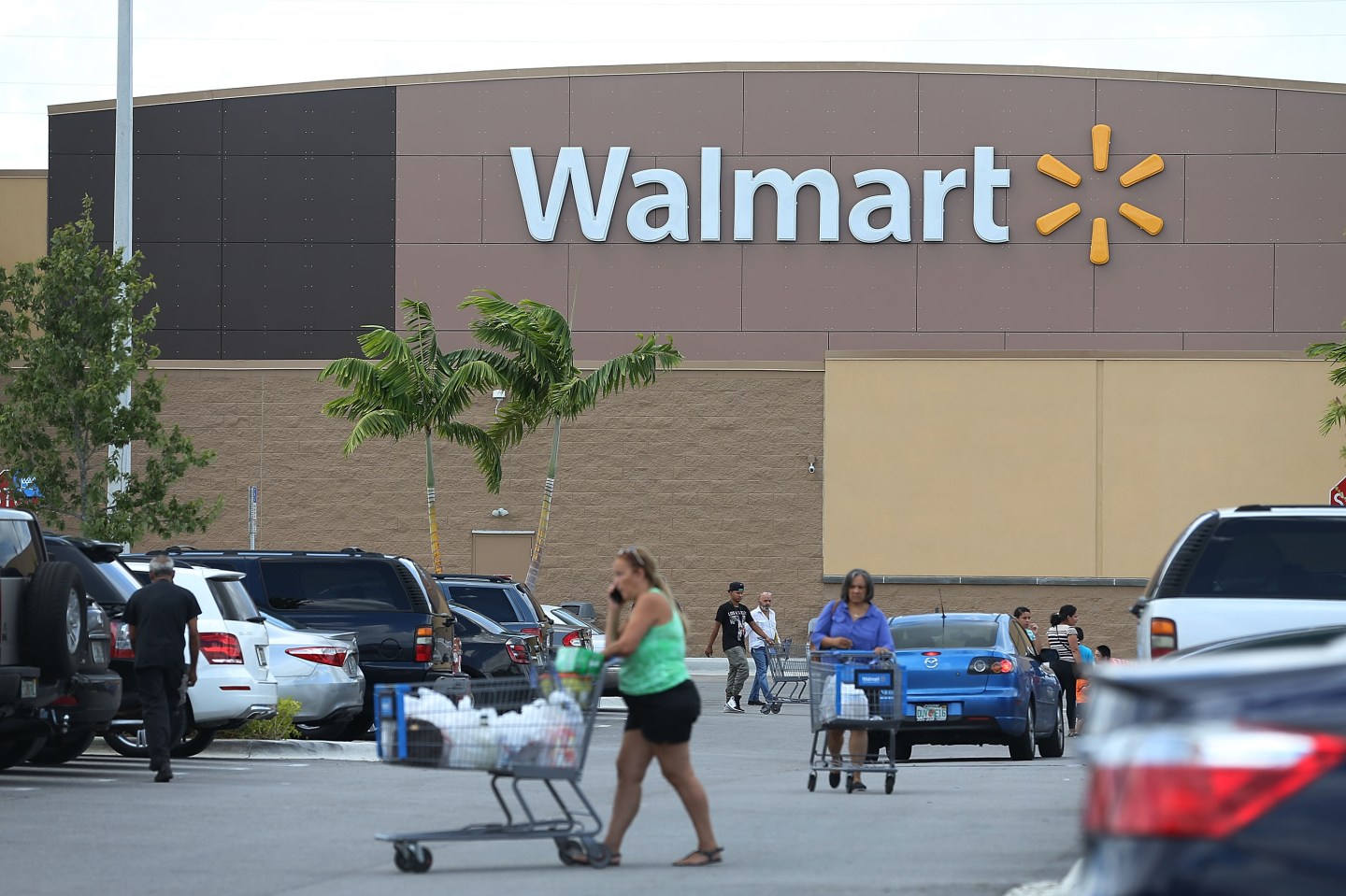 MIAMI, FL - AUGUST 18: A Walmart store is seen on August 18, 2015 in Miami, Florida. Walmart announced today that earnings fell in the second quarter due to currency fluctuations and the retailer's investment in employee wages and training. (Photo by Joe Raedle/Getty Images)
Photograph by Joe Raedle — Getty Images

Walmart (WMT) has been dogged by criticism of the standard of its stores in recent years, including long checkout lines and insufficient stocking of its shelves. A Reuters analysis of the giant discount retailer’s growth and its employee numbers may help explain why.

Over the past decade, Walmart opened nearly 1,500 new stores in the United States, a 45% increase in space and equivalent to more than 4,000 American football fields, while its sales have grown by 50%. But based on rough headcount figures provided by the company, the expansion was in stark contrast to the growth in its U.S. workforce, which was only about 8% in that time. It means the store space per employee increased around 34%.

The disparity may help to explain why Walmart acknowledged earlier this year that its customer service needed to be improved significantly as it was hurting sales growth, and why it is now investing a lot more in its workforce and technology to improve the standard of the stores and how shoppers are treated there.

Before the company began rectifying its problems, only 17% of stores got a pass mark in an internal survey in February. Customers were asked to judge the stores on their ability to provide clean, fast and friendly service.

Through July of last year, the company, which currently operates 5,283 stores under the Walmart and Sam’s Club brands in the U.S., endured a six-quarter span in which same-store sales showed flat or negative growth.

Greg Foran, who became chief executive of the retailer’s U.S. operations in August last year, says employee levels have at times been too low. “The reality is over the last probably four years it hasn’t been enough,” he said in an interview. Foran also said the company had been too focused on producing profits to benefit shareholders in the near term and this had come at the expense of customers.

Walmart, which for many years built a reputation for providing the lowest prices, allowed that advantage to erode. “The customer lost because the price gap narrowed,” Foran said. “And the shareholder won short-term.”

To be sure, the available data limits what can be gleaned about Walmart’s use of its workforce. In its filings, Walmart only gives an approximate figure for its headcount and does not disclose the number of hours worked, which would give a more accurate picture of labor productivity. It is also unclear how many of its employees work outside the stores and how much labor may have been shifted to its stores because of increased automation in its warehouses.

Walmart spokesman Kory Lundberg said after being provided with the Reuters analysis that the drop in employees per square foot over the past 10 years reflected advances in technology and process, such as increased use of shelf-ready packaging, motorized carts to retrieve shopping carts, and self-checkout lanes.

This year the company installed 8,000 new department managers—key players in the effort to keep its shelves stocked and improve the customer experience. And in its quarterly financial report on Tuesday, the company said it added more labor hours to its stores than initially planned for its fiscal third quarter. “The real question is have you got the right labor in the right area at the right time doing the right jobs,” Foran said.

Walmart in February announced it was raising starting wages, initially to $9 an hour and then to $10 for existing employees in early 2016, in a bid to improve customer service. The company does not disclose what the average starting wage was before.

Last month, it shocked investors by warning earnings would drop by as much as 12% in the year to January 2017 because of the increased labor costs, investments in e-commerce and discounts, sending its shares to their lowest level in four years.

On Tuesday Walmart said sales at stores open more than a year rose by 1.5% in the fiscal third quarter, the fifth straight quarterly gain. But with operating income still declining as costs rise, Walmart is seeking faster revenue growth. “We’ve got to be growing faster,” Foran said.

Walmart added sales performance as a metric in setting cash bonuses for top executives for the year ended January 2015. Previously, bonuses had been largely based on profit targets.

Walmart says its efforts are having a positive impact. Some 70% of its stores have now earned a passing grade on customer service—about quadruple the result in February.

A recent survey of Walmart shoppers by securities firm Cowen & Co showed customer service satisfaction at 60% in September, its highest in nearly two years. Still, some analysts and suppliers have expressed concern the retailer still does not have enough workers to address a long-standing restocking problem.

Based on a rolling survey of major U.S. markets, retail consultancy Strategic Resource Group estimates Walmart currently has anywhere from 10 to 20% of products out of stock, up from 2 to 3% a decade ago.

Walmart says in-stock levels are improving, though it has not provided detailed figures. On Tuesday, Foran told reporters efforts to ensure it had stock of key items had improved sales of fresh food.

Foran said Walmart would likely cut back on labor over the next decade as it consolidates back office functions and simplifies the stocking process. It is testing a service that will allow customers to use handheld scanners to tally items as they put them in the cart, potentially speeding up checkout, and it has applied for permission to test drones for use in its warehouses and for curbside and home delivery.

Central to the effort to employ labor more effectively is a new inventory management system rolled out this year. Key changes include the introduction of three distinct shifts that ensure important tasks are finished within a 24-hour cycle, instead of spilling over into the next day as in the past. It has cut the number of steps to get product out of the backroom by 60%, is using a new smartphone-like device to reduce time needed to scan shelves by 89%, and has also begun stacking inventory on the sales floor and on a newly installed top shelf.

“If we can shave seconds off each of those processes it’s worth a lot,” said Mark Ibbotson, head of the retailer’s Central Operations unit.