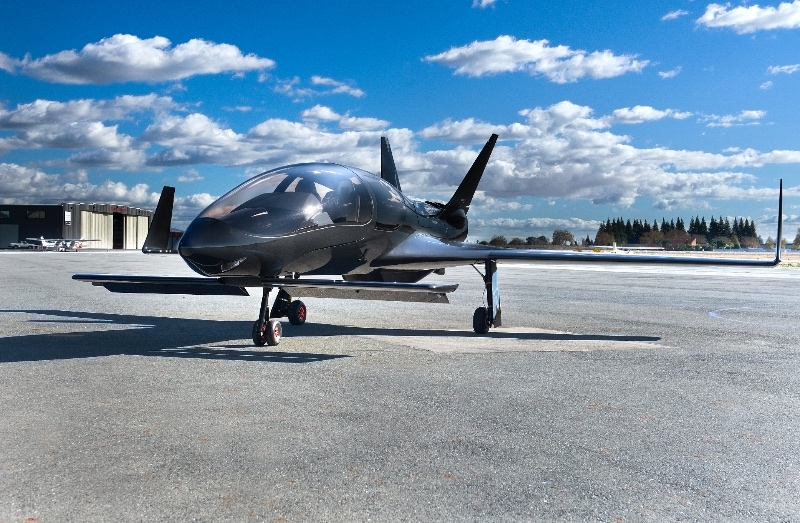 When you design a product these days, you create it to be a simple as possible—so that one button can operate everything, ideally, aircraft designer David Loury says. But the revolution in product design that has refreshed, reimagined, and simplified nearly every consumer product category has bypassed general aviation.

“I’ve spent more time piloting planes built before my birth than I have spent in aircraft built after I was born,” the 38-year-old CEO of aircraft startup Cobalt says. “Nobody is bringing a solution that’s radically disrupting.”

Today in San Francisco, Cobalt opened up the order book on the aircraft that Loury hopes will change that. The Cobalt Co50 Valkyrie is a five-seat, single-engine, propeller-driven aircraft designed by Cobalt’s engineers, as Loury describes it, “to change all the things that bothered us as pilots.” It dispenses with boxy fuselages and instead borrows a streamlined design (and bulbous cockpit canopy) from early fighter jets. A plush interior boasts hand-stitched leather seats. The rear-mounted propeller allows for increased visibility in front and a quieter cabin. A minimalist cockpit is laid out around a space for the pilot’s iPad.

“Obviously we want to do things newer, sexier, more glamorous,” Loury tells Fortune. “The idea is to refresh general aviation.”

General aviation could use a refresh. Due to the regulation and certification-heavy nature of the aviation industry, legacy aerospace companies have long had an economic interest to make only incremental improvements to well-defined and well-understood aircraft designs. As a result, Loury says, the look and feel of most small aircraft—particularly single-engine propeller aircraft—hasn’t changed much in decades. “They don’t relate at all to the fantasy of flying,” he says.

Cobalt is one of a small cadre of aerospace companies trying to change that. Perhaps unsurprisingly, the Bay Area has become a center of gravity for companies like Icon Aircraft—maker of a sleek new two-seat single-engine recreational aircraft similarly designed around ease-of-use and updated aesthetics—and Cobalt. California boasts some of the most concentrated aerospace engineering talent in the country. And Silicon Valley provides not only the programming and design talent any modern technology company requires, but the ample cash an aerospace startup needs to bring a new aircraft from design to concept to consumer product.

The Valkyrie is Cobalt’s entry into the market, and at $700,000 dollars it isn’t exactly a consumer product in the same way an iPhone is. It’s aimed at a customer who wants a higher performing single-engine piston aircraft without taking on the complexity and expense of flying a turbine-powered aircraft, Loury says. Spec-wise, it boasts a top speed of 260 knots (or roughly 300 miles per hour), a range of more than 1,000 miles, and room for four passengers and luggage.

Cobalt has also built safety into the very core of the design, Loury says. The forward canard wing makes it particularly difficult for the pilot to stall the aircraft, and a full-aircraft parachute ensures that pilots who make critical errors have an extra layer of insurance in place.

These enhanced safety features baked into airframes like Icon’s A5 and Cobalt’s Valkyrie are a benefit in and of themselves, Loury says, but they’re also feed a kind of positive feedback loop. Most small aircraft accidents are the product of stalls, and most of those stalls are produced by pilot error. Those errors typically happen when a pilot—particularly an out-of-practice pilot—is distracted in the cockpit. Simpler and safer aircraft are more accessible aircraft, and the more pilots that fly, and the more frequently they fly, the safer the skies become.

In taking the Valkyrie to market, Cobalt faces competition from deep-pocketed, traditional aerospace incumbents like Textron-owned Cessna and Beechcraft. It also has to avoid the fate of aerospace startups past. A decade ago aviation newcomer Eclipse Aviation–chasing a similar market with its six-seat Eclipse 500 jet–ran into certification and manufacturing problems that ultimately led the company into bankruptcy in 2008.

Loury is banking on the idea that a new breed of aircraft will inspire a new breed of pilot and a new way of thinking about private air travel. With its order book open as of today, Cobalt will soon have hard insight into whether a “newer, sexier, more glamorous” airplane can hit a sweet spot in the private aircraft market, somewhere between the boxy, boring propeller aircraft of yesteryear and the low end of the private jet market.

Cobalt will formally unveil the co50 Valkyrie at an event this evening in San Francisco.

For more about the private aircraft industry, watch this Fortune video.