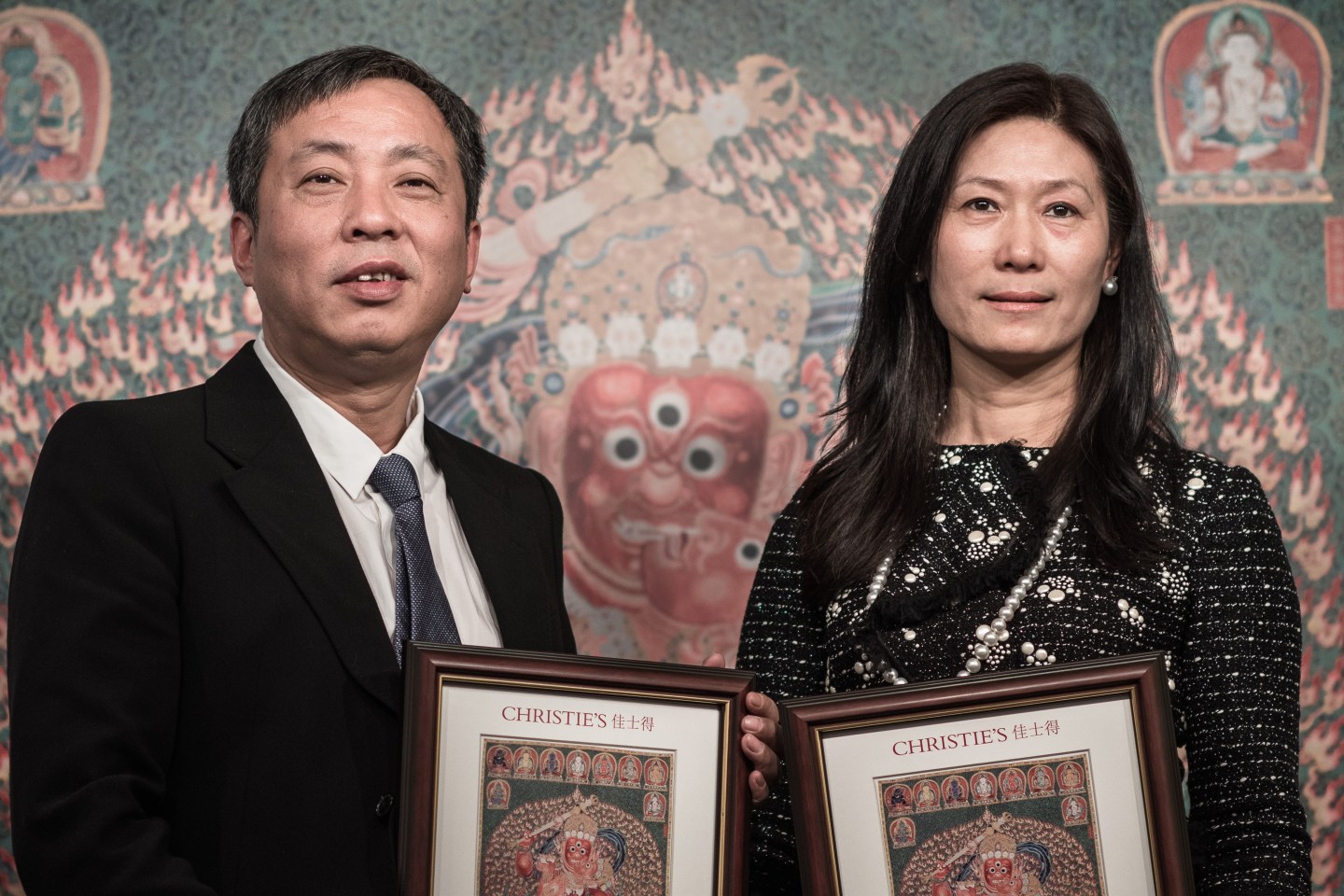 How much would you pay to be stared at by a naked woman for the rest of your life?

For Liu Yiqian, the answer is (at least) $170.4 million. That’s how much the billionaire who made his fortune in investments ranging from real estate to pharmaceuticals, paid on Monday night for a reclining nude by the Italian painter Amedeo Modigliani at an auction at Christie’s on Monday.

It’s the second-most expensive sale ever of a piece of art at auction, only just failing to match the $179 million paid for Pablo Picasso’s Les Femmes d’Alger (Version ‘O’) in May, and an emphatic reminder about how the shift in global wealth patterns has utterly transformed the top end of the art market.

Liu has made headlines in the art collecting world before, albeit in buying works from artistic traditions closer to home: last year, he paid $36.3 million for a small Ming Dynasty cup (using 24 swipes of his American Express Centurion card to settle for it, according to Bloomberg – just think of the reward points). He famously shocked most of China by proceeding to drink tea from it. More cannily, he’s made some of his money back by selling replicas of the cup in the meantime.

Earlier this year, Liu broke the world record for an oriental work of art sold by an international auction house, by paying $45 million for a 600-year-old Tibetan embroidered silk tapestry, or thangka. Just since the start of 2014, Liu has spent over $270 million on art in various forms. That’s around 20% of a total net worth that Forbes estimates at $1.4 billion.

You might think that this kind of behavior would fall foul of President Xi Jinping’s campaign against conspicuous consumption, which has exacted such a toll on western companies selling more modest luxuries there.

But Liu is no mere private collector: many of his purchases are destined for public show in the “Long Museum” in central Shanghai, which was China’s largest private museum when it opened in 2012. It’s now open to the public. Such largesse, especially when it’s used to repatriate Chinese art plundered by western collectors in previous centuries, buys a lot of goodwill.

Nor can it be argued that he owes his place just to political connections: Liu left school at 14 to help the family business, making handbags that his mother would sell on the street of Shanghai, according to the South China Morning Post. After some astute early-stage investments in a range of Chinese industries, he set up a car insurance and a life assurance company that are now among China’s largest. The former is a joint venture partner of French insurance giant AXA SA (AXAHY)

Last night, Liu’s appetite for acquisitions drove “Nu Couché,” one of a series of nudes painted by Modigliani in a Paris garret while World War I raged less than 150 miles away, into a rarefied group of artworks to command a nine-figure price tag. That list includes three works by Pablo Picasso and three by Alberto Giacometti.

Another lot at the auction, “Nurse” by pop art icon Roy Liechtenstein, just missed out on cracking the $100 million mark, going for $95 million on an evening that generated total sales of $491 million.

While that sounds like a lot, the evening sale it’s only in the middle of Christie’s pre-sale range estimate of $442 million to $540 million, suggesting that the global economic slowdown (especially pronounced in China) is starting to have an impact on prices. Total sales were some way short of the $705 million Christie’s realised in its blockbuster spring sale (which includes ‘Les Femmes d’Alger’).

They’ll be hoping Liu is back for some return business soon.