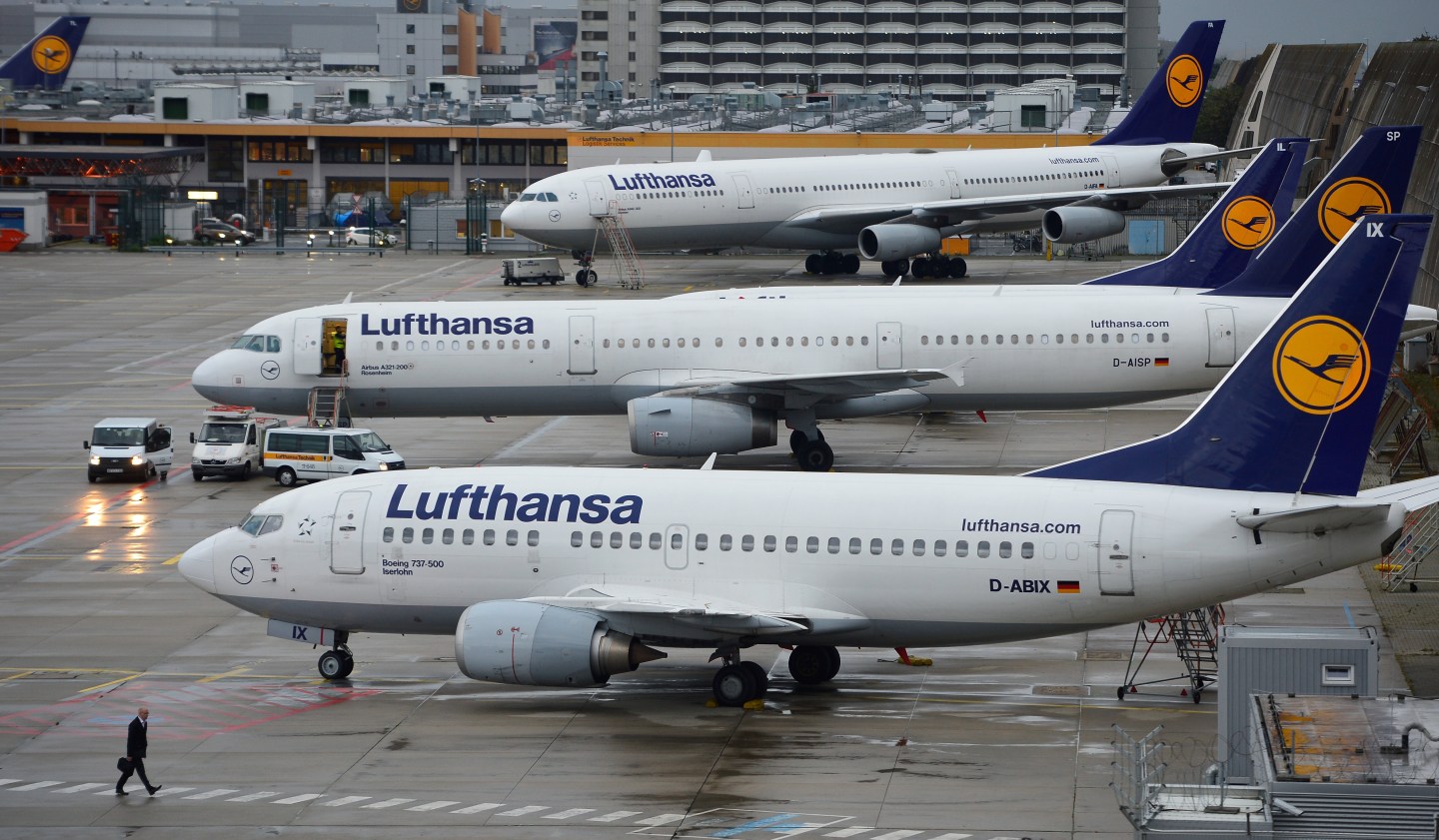 FRANKFURT AM MAIN, GERMANY - OCTOBER 21: A man walkes in front of Lufthansa airplanes at the Frankfurt Airport on October 21, 2014 in Frankfurt am Main, Germany. Vereinigung Cockpit, the labor union that represents the pilots, launched the two-day strike yesterday that has been expanded from short and medium-distance flights on the first day to long haul flights today, affecting over 100,000 passengers. This is the seventh strike by Lufthansa and Germanwings (a Lufthansa subsidiary) pilots this year as the union attempts to maintain the Lufthansa pilots' early retirement guarantee, a benefit that Lufthansa is trying to cut. (Photo by Thomas Lohnes/Getty Images)
Photograph by Thomas Lohnes — Getty Images

German airline Lufthansa canceled hundreds of flights on Friday and warned of more disruption on Saturday after a cabin crew union started a series of walkouts that could become the longest ever strike at the carrier.

On the first day of a planned week of protest over failed pension talks, flight attendants were instructed to strike at Frankfurt, Lufthansa’s biggest hub, and Duesseldorf between 1 p.m. and 10 p.m. GMT, affecting about 37,500 passengers.

That will be followed by walkouts on short-haul flights from Frankfurt and all flights from Duesseldorf between 5 a.m. and 10 p.m. GMT on Saturday, the UFO union announced.

According to Lufthansa, that will result in about 520 short-haul flights being canceled that day, affecting 58,000 passengers.

For Friday, Lufthansa said it had canceled 290 planned flights including 15 long-haul departures, which are typically more profitable for carriers. Eight long-haul flights will still take off, it said.

The walkout comes after Lufthansa and the union failed to reach an agreement in a long-running row over early retirement benefits and pensions.

Lufthansa is trying to negotiate with various staff groups to bring down pension costs as part of a savings drive to allow it to compete better with low-cost rivals and wealthy Gulf carriers.

Should Lufthansa management not make concessions, the union will carry out a threat to stage more walkouts until Nov. 13, it said.

Equinet analyst Jochen Rothenbacher said strike costs could total 20 million euros ($21 million) a day, depending on the number of cancellations, giving a total of around 140 million euros should the union strike on seven days, as threatened.

Strikes by pilots have already cost Lufthansa 130 million euros so far this year.

Lufthansa shares were up almost three percent on Friday, nearly recovering from Thursday, when they closed down 4 percent after the union confirmed it would strike.

Lufthansa’s other main hub in Munich will not be subject to walkouts until after Sunday, given school holidays in that region of southern Germany.

Lufthansa Group airlines Swiss, Austrian Airlines, Germanwings, Eurowings, Brussels Airlines, Air Dolomiti and Cityline will not be affected by the strike. That means that overall, the airlines group can operate 90 percent of the 3,000 flights it typically runs on a Friday.