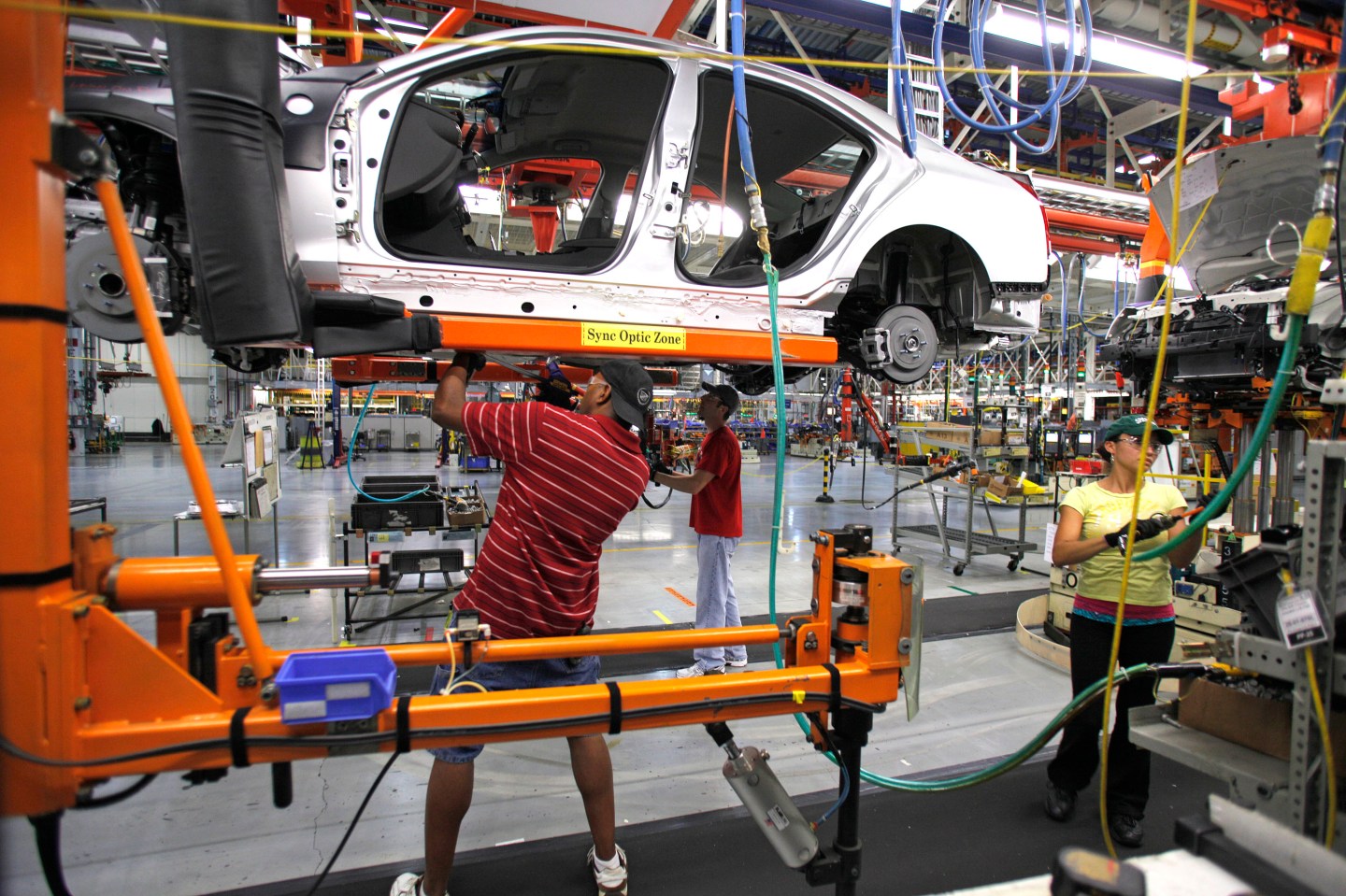 Americans have historically looked to autoworkers to lead the way in raising wages and setting the bar for middle class jobs. During the post war era, UAW contracts were often copied by the steelworkers (USW), electrical workers (IUE), and other industrial unions. The rising wages and benefits of industrial workers, in turn, led to greater demand for goods and services and a rising standard of living for other workers as well.

Through labor organizing and collective bargaining, the rank and file of the United Auto Workers union helped raise and defend standards for pay and benefits in the auto industry that in turn helped build the strongest middle class in history.

Economists call this, “wage pull.” But when the auto industry faced a crisis during the recession, UAW members made sacrifices in order for the big three automakers to recover. So it was not surprising that middle class wages and benefits also declined throughout American industry.

And now that GM (GM) and Ford (F) are back to making healthy profits, the workers who helped fuel that rebound are rightfully speaking up for long-overdue raises.

Last week, the UAW announced a tentative contract with GM that is remarkable for two reasons. First, it would deliver pay raises, bonuses, and other benefits that make real progress in rewarding the sacrifices GM (GM) workers have made over the past eight years, while still protecting jobs and ensuring that the company and workers can weather another downturn.

But perhaps even more significantly, this tentative contract would deliver these gains even as rock-bottom wages have increasingly become the norm across the manufacturing industry, and throughout the economy as a whole.

Consider the fact that one in four manufacturing jobs in the U.S. now pays less than $11.91 an hour – not much higher than the pay at McDonald’s (MCD) or Walmart (WMT), and a far cry from what anyone would consider enough to support themselves or their family.

And as a result of pay cuts by non-U.S., non-union automakers like Hyundai and Nissan and bad actors in the auto supply sector, wages in the auto industry – the largest segment of America’s manufacturing base – have fallen 13 times faster than the rate for all other jobs over the past decade.

In other words, the new tentative GM contract would deliver pay raises, bonuses, and protections that other manufacturing workers across America can only dream of having today. Plus it would provide the first step in reestablishing pattern bargaining in the auto industry and a benchmark for future UAW organizing efforts at non-union auto companies.

More specifically, if this contract is approved, veteran GM workers would see $14,000 in bonuses alone over four years, and will make $29,700 more in raises and bonuses over the length of the contract, according to news reports and information the union has released. Skilled workers at GM will make $31,850 more over the next four years.

The tentative contract would also preserve a profit sharing formula that has paid out more than $30,000 over the last years. Profits are never a sure thing in today’s auto industry, but GM is healthy. The company posted a record profit in the third quarter and has booked an eye-popping $8.3 billion in profits through October. These profits indicate GM workers’ profit sharing will be well above the levels of the last few years.

Importantly, this tentative contract would also provide a pathway for so-called “Tier 2” workers at GM – those hired after 2007, who are paid a lower rate even while performing the same work as veteran workers – to eventually make the same wages as veteran workers after eight years seniority.

With wages throughout the manufacturing industry falling and paychecks shrinking for workers across the economy, the tentative contract negotiated by the UAW presents workers at GM with an opportunity to lead the way once again in setting the bar for America’s middle class.

John Russo is a Visiting Scholar at the Kalmanovitz Initiative for Labor and Working Poor at Georgetown University.