Why King is Worth $6 Billion, but Other Gaming Companies Aren’t 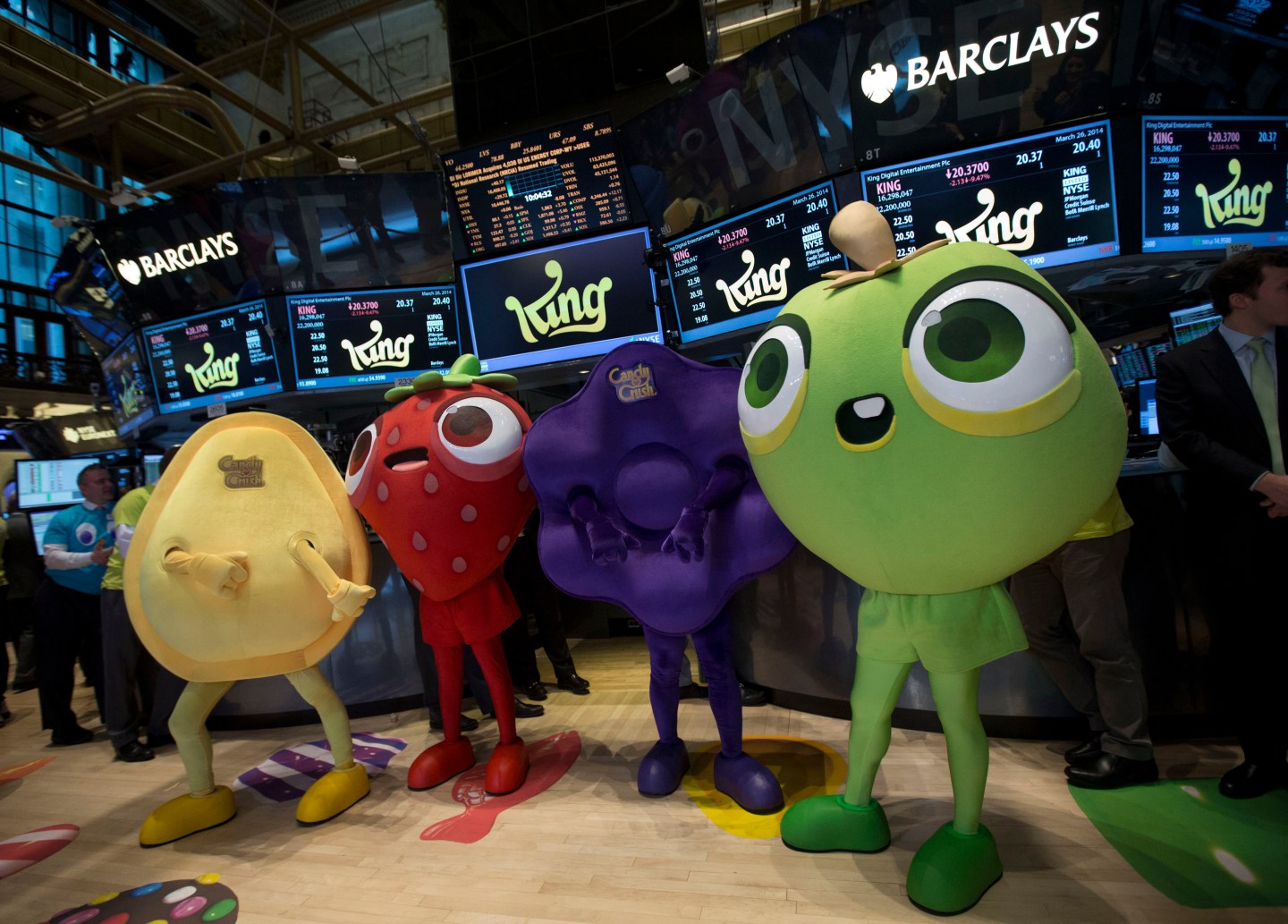 Characters from King Digital Entertainment Plc's "Candy Crush" game stand for a photograph in front of a trading post on the floor of the New York Stock Exchange (NYSE) in New York, U.S., on Wednesday, March 26, 2014. King Digital Entertainment Plc, the maker of the "Candy Crush" smartphone game, slid on its first day of trading after raising $500 million in its initial public offering. The shares fell 10 percent to $20.16 at 9:53 a.m. in New York, after 22.2 million shares were sold at $22.50 each. Photographer: Jin Lee/Bloomberg via Getty Images
Photograph by Jin Lee — Bloomberg via Getty Images

Activision Blizzard (ATVI) announced this week that it will plunk down $5.9 billion for King Digital (KING), the maker of the casual mobile game Candy Crush Saga. The price represents a 20% premium to King’s closing stock price Monday.

King stock has languished below its IPO price of $20.50 almost the entire time it’s been public. No surprise: Investors were already lukewarm on King when it went public in March of 2014 over fears that its hit game had already peaked. A quick look at the fates of the makers of Angry Birds and Farmville can tell you that it’s not easy for a gaming company to replicate a breakout hit after the first one falls out of favor.

But King has somehow defied the odds: It hasn’t launched another Candy Crush-sized hit. But Candy Crush hasn’t gone anywhere. My colleague Chris Morris noted this morning that Candy Crush is still the fourth highest-grossing game in the App Store three years after its release, and follow-up game Candy Crush Soda, though not as successful, is the number-six title one year after its release. (Indeed, woman next to me on the subway today played Candy Crush Saga on her phone the entire ride.)

That’s got to sting for Zynga (ZNGA), which saw its big hit, Farmville, slip from relevance almost as quickly as it exploded in popularity. Several months ago, Fortune argued that Zynga should go private.

The company has $1.1 billion in cash on its balance sheet. It owns real estate worth at least $228 million. And brings in almost $700 million in revenue. But Zynga’s market cap is a paltry $2.26 billion.

That deal looks even more attractive today. (Indeed, Zynga stock is trading up by 3% today.)

What’s the difference between King and Zynga? They’re both purveyors of casual, lightweight games that monetize with in-app purchases. They both had big breakout hits which are now maturing. They both employ the same annoying, spammy strategies for adding new users. But one is worth $6 billion and one is worth less than half of that.

Aside from the fact that Candy Crush Saga has had surprising staying power, there are some key differences in their businesses. Zynga loses money and its losses have widened in recent years. It’s bloated: the company employs 2,000 workers to earn $690 million in annual revenue. Lastly, it got started as a desktop gaming site and has struggled to produce a mobile hit in a time when 19% of all money spent on video games is on smartphones.

Meanwhile, King earned $554 million in revenue with $140 million in profit with just 1200 workers. And it’s a mobile-first company—all of its games are designed for smartphones first.

So if you’re Activision Blizzard, a publicly traded company with its own earnings pressures, and you want to get ahead of the move to mobile gaming, which one are you going to buy: A profitable, mobile-first company with a hit game that’s managed to stay popular? Or a money-losing company with a bloated headcount and no break-out mobile hits?

Zynga remains an attractive turnaround play for the right private equity investor. But on paper, it’s easy to see how a lean, profitable, mobile-first company like King has completely leapfrogged it.