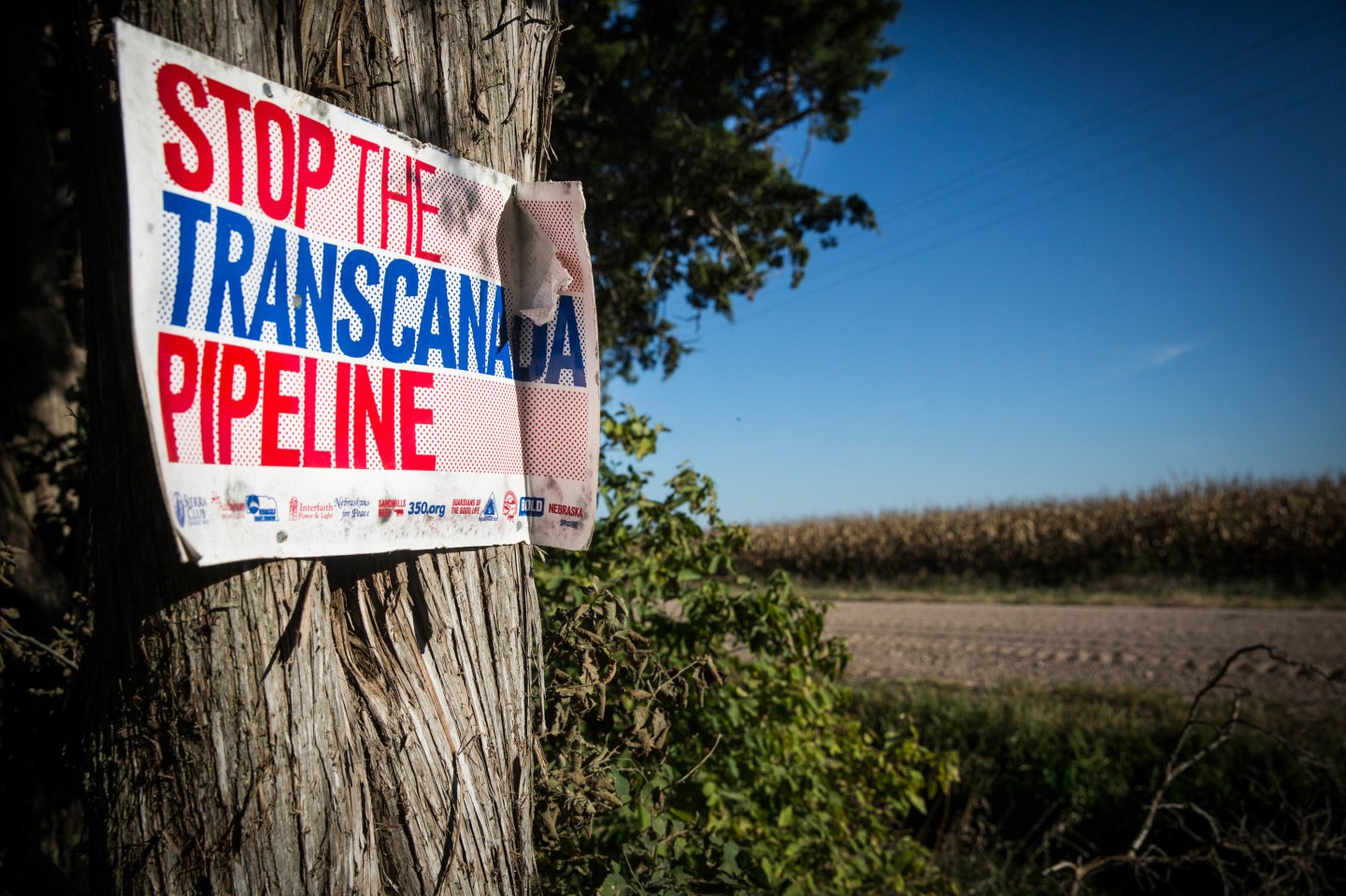 POLK, NE - OCTOBER 11: A sign against the proposed Keystone XL pipeline is posted to a tree on Shannon Graves' property on October 11, 2014 in Polk, Nebraska. Graves, a native Nebraskan, is staunchly against the proposed Keystone XL pipeline, which would pass through her property. She believes the pipeline would negatively effect Nebraska's environment and is frustrated by the way TransCanada has treated Nebraskans. (Photo by Andrew Burton/Getty Images)
Photograph by Andrew Burton — Getty Images

Faced with dimming prospects for approval, the Canadian company behind the proposed Keystone XL pipeline chose to plead with the U.S. government for a delay on its fate, signalling that prolonged uncertainty is preferable to rejection of the $8 billion project.

Monday’s appeal by Calgary-based TransCanada Corp (TRP) has been widely interpreted as an attempt to avert an impending “no” from President Barack Obama to the nearly 1,200-mile (2,000-km) cross-border pipeline. Keystone XL would carry heavy crude oil from Alberta to Nebraska and on to Gulf Coast refineries, and has become the symbolic heart of a struggle between environmentalists opposed to oil sands development and defenders of fossil fuels.

The U.S. State Department said it had received a letter from TransCanada asking for the delay but a spokesperson said the review would continue for now.

TransCanada spokesman Mark Cooper said the company would not speculate on what the decision may be or when it may come.

But the Obama administration has become more vocal and active on climate change issues as it closes in on its final year in office, and the president has repeatedly expressed doubts about the merits of the pipeline.

TransCanada’s request for a delay came amid a darkening political outlook for the project on both sides of the border.

In Nebraska, the company remains embroiled in time-consuming disputes with landowners over the proposed pipeline route. And in Canada, it lost a powerful advocate in October when Conservative Prime Minister Stephen Harper, who had openly allied with Republican leaders in his aggressive lobbying for Keystone, was defeated by Liberal leader Justin Trudeau.

Although Trudeau has offered cautious backing for Keystone, he has also warned that both the pipeline and wider oil sands development must demonstrate improved environmental sensitivity.

Nor does Trudeau face any political damage from U.S. rejection of a pipeline so closely identified with Harper. The incoming prime minister has already made clear he will not follow his predecessor in allowing the politics of Keystone to define relations between the two countries disproportionately.

In Washington, U.S. lobbyists close to the case said TransCanada was finally facing political reality, recognizing that a delay would better protect shareholder value than allowing Obama to reject the project.

The request for a delay came on the eve of TransCanada issuing an earnings report, and shortly after the White House said it still expected Obama to make a decision on whether to grant the permit before he leaves office in January 2017.

Should Obama agree to suspend the review, Keystone’s fate would almost certainly fall to the next president. Republicans have been universally supportive of building Keystone, though Donald Trump did qualify that in October, saying he would seek a “better deal” from TransCanada.Democratic Party front-runner Hillary Clinton is opposed to the pipeline.

On one level, the request to suspend the review offers Obama an escape from having to make a final call on a decision he has avoided for years. TransCanada began the licensing process in 2008 but the decision was continually pushed back by various court cases, technical delays and the president’s apparent reluctance to choose.

Yet TransCanada’s gambit may not have completely removed the pressure on the president. Environmental groups responded to TransCanada’s announcement with a blizzard of demands on Obama to ignore TransCanada’s move and kill the pipeline anyway.

“TransCanada acknowledged the writing on the wall by requesting to suspend the review of its permit application,” said a statement issued by Tom Steyer, the billionaire green activist who heads NextGen Climate. “Today, tomorrow or next year, the answer will be the same: Keystone XL is a bad deal for America, our climate, and our economy.”

And when Shell announced it would not proceed with the 80,000 barrels a day Carmon Creek project in the oil sands, the company cited among other things: “current uncertainties, including the lack of infrastructure to move Canadian crude oil to global commodity markets.”

But much of the attention in Canada has switched to the proposed Energy East pipeline that would move Alberta crude across Canada to Atlantic refineries. And while there is opposition to that pipeline as well, its politics remain contained within Canada’s borders.