Here’s How Jeb Bush is Trying to Revive His Campaign 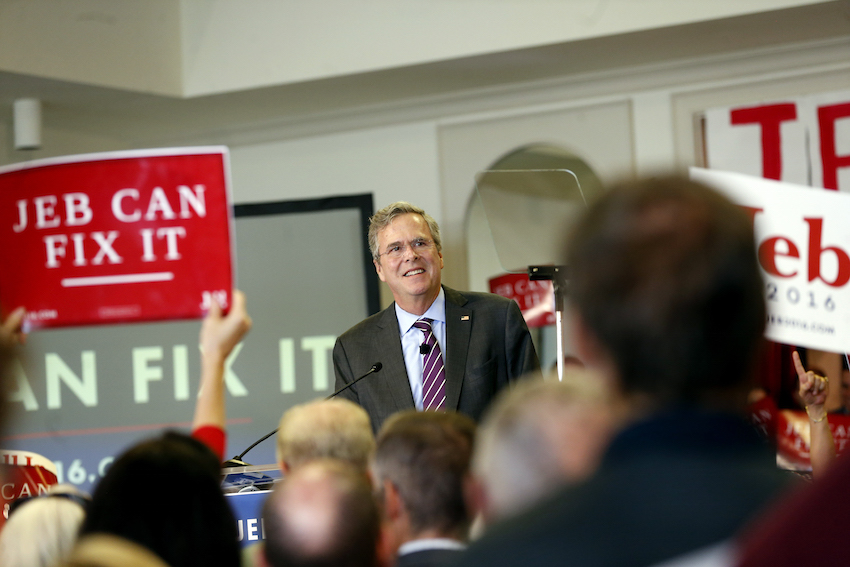 TAMPA, FL - NOVEMBER 2: Republican presidential candidate and former Florida governor Jeb Bush speaks to supporters during a rally on his "Jeb Can Fix It"¬ù Tour on November 2, 2015 at the Tampa Garden Club in Tampa, Florida. Following dropping poll numbers and poor debate performance Bush is trying to reset his campaign that many say has been flailing. (Photo by Brian Blanco/Getty Images)
Photograph by Brian Blanco — Getty Images

As Jeb Bush seeks to revive his bid as a serious candidate for the Republican presidential nomination, he’s kicking off a new tour dubbed “Jeb Can Fix It” to highlight his experience as Governor of Florida.

The push by his struggling campaign, which recently cut staff and salaries, comes less than a week after the third GOP debate where pundits and viewers widely concluded that Bush failed to stand out. Once a contender for the nomination, he currently has just a 7% share of likely voter support. Meanwhile, Donald Trump and Ben Carson sit atop the national polls.

Bush’s campaign is trying to reset the candidate’s struggles against the other challengers and showcase his political experience vs. his Republican primary opponents, according to USA Today.

“I will do everything in my power to win this race,” he said during a speech in Tampa on Monday morning. “But there are some things I am not willing to do: I will not compromise my principles. I will not trade in an optimistic outlook to put on the cloak of an angry agitator.”

As part of the “Jeb Can Fix It” tour, USA Today noted that Bush’s campaign has released an e-book of emails the candidate wrote while in the Tallahassee statehouse from 1999 to 2007.

“One, I can’t be someone I’m not,” Bush said at the Monday speech in Tampa ahead of traveling through Florida, South Carolina, and New Hampshire. “And, two, getting things done isn’t about yelling into a camera, or regurgitating sound bites free of substance.”

Bush also took the opportunity to take a jab at Trump. “You can’t just tell Congress ‘You’re fired’ and go to a commercial break,” he said about the former host of The Apprentice.