The debt ceiling is a useless way to control U.S. spending 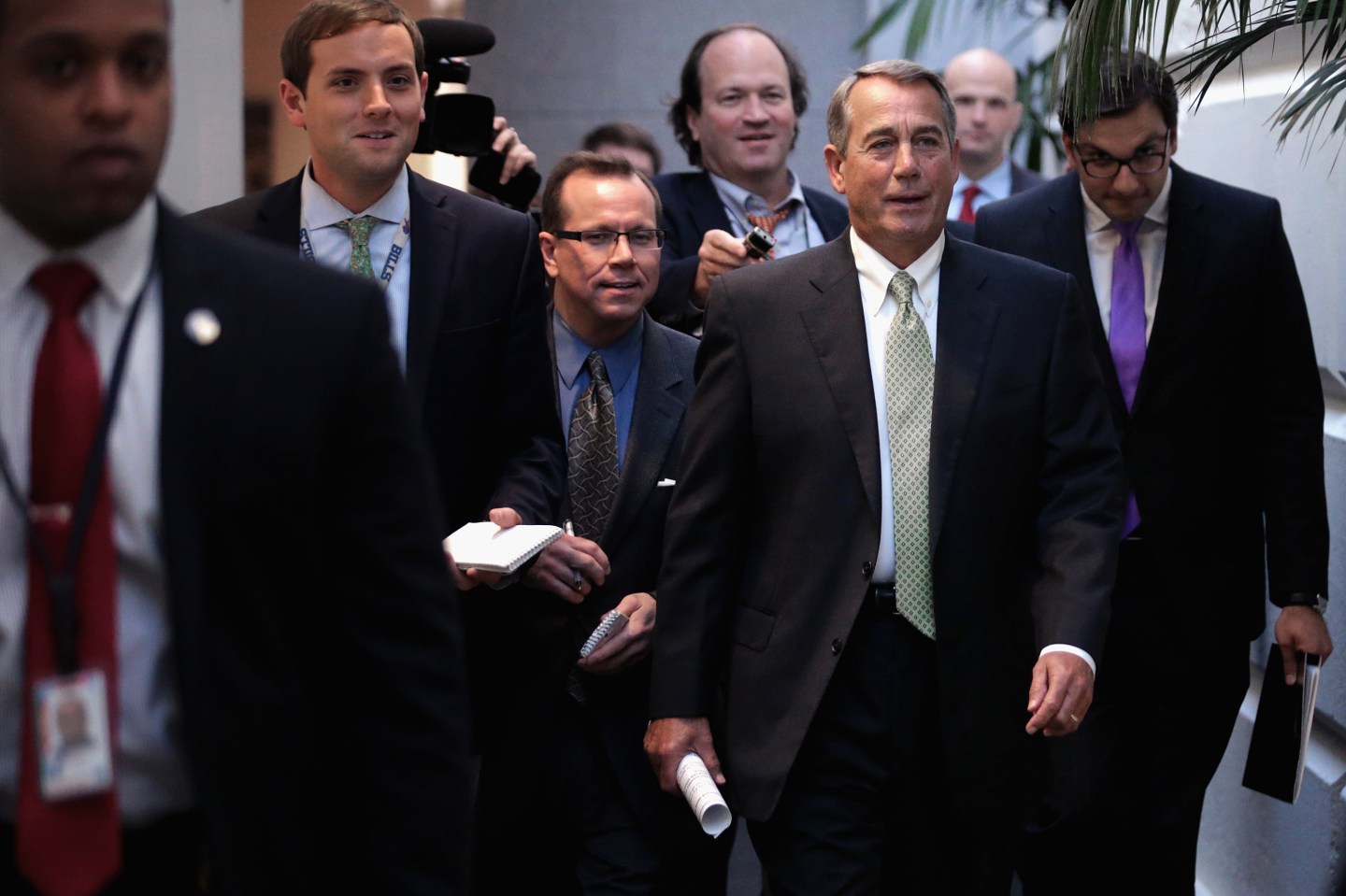 WASHINGTON, DC - OCTOBER 26: Speaker of the House John Boehner (R-OH) (2nd R) tells reporters that he is "cleaning out the barn, cleaning out the barn," as he heads to a GOP conference meeting at the begining of his last week in the House of Representatives October 26, 2015 in Washington, DC. The White House and Boehner may be nearing a two-year budget deal that would avert another government shutdown, increase defense and defense spending by $80 billion and extend the debt limit through to March 2017, clearing it away until after the 2016 elections. (Photo by Chip Somodevilla/Getty Images)
Photograph by Chip Somodevilla — Getty Images

The U.S. is once again on the precipice of default on its national debt — not because of a fundamental inability to generate and collect tax revenues (a la Greece), but because of political shenanigans over the country’s debt ceiling.

The Treasury Department projects that after November 3, the federal government will not have enough cash on hand to pay its bills and obligations without borrowing in excess of the current federal debt limit, currently $18.1 trillion. If Congress does not act by then, the Treasury would have no option but to renege on its promises, an action that could have serious consequences for the nation’s economy — and well beyond.

It’s uncertain if we’ll see more political shenanigans this week — such as the attachment of amendments that may pose a problem for quick passage — as Congress considers whether and how much to raise the debt ceiling. The latest reports suggest House Speaker John Boehner and the White House are negotiating a two-year deal that would suspend the debt ceiling until 2017.

That would be a welcome development, but going through this dangerous drama every year or two (or multiple times in a single year) begs an important question: Why have such a limit when the spending it seeks to constrain has already been approved by Congress, and when the consequences of not raising it could be so dire?

Origins of the debt ceiling

First, a quick primer on government finance. When annual outlays (spending and transfers) exceed tax revenues, the government runs a budget deficit and must then borrow funds to make up the difference. The government does so by selling Treasury securities to the public in exchange for cash.

Treasury securities are debt instruments, which are, essentially, promises to repay the face value (the dollar amount borrowed) plus interest at an agreed-upon date. These securities are ultimately backed by the Treasury’s ability to collect future taxes to cover these payments. The total face value of the federal government’s outstanding debt — the amount it currently owes its bond-holding creditors — is equal to the accumulation of all past annual deficits.

The statutory ceiling on U.S. debt places a legal upper bound on the size of this outstanding debt — that is, on how much the federal government can borrow.

The ceiling has been around since 1917, when Congress adopted it to strengthen the legislative branch’s control over spending and taxes, then primarily determined by the president. Besides the U.S., only Denmark has a statutory debt limit (although in Denmark the limit is much less amenable to political mischief than here).

The economic arguments for having a debt ceiling are exceedingly weak.

First, the original rationale for the statute — to provide a better balance of power between lawmakers and the president over who controls fiscal policy — is obsolete. The Congressional Budget Act of 1974 now specifically lays out procedures for how Congress is to participate in the annual budget process. The ceiling is, at best, redundant in light of its initial purpose.

Second, the specific limit set by the law — initially around $12 billion and now at its current level after having been raised 78 times since 1960 — is completely arbitrary and not linked in any meaningful way to the scale of the economy.

Were a debt limit deemed to be a useful policy tool, the limit would need to account for inflation. Otherwise, generally rising prices, even at current low inflation rates, would eventually push nominal borrowing beyond the fixed limit anyway, even if there were no changes in real (inflation-adjusted) spending and borrowing.

One option would be to index the nominal limit to a measure of inflation, like changes in the consumer price index. Another would be to impose the limit on debt as a proportion of the nation’s total output. The latter alternative would at least have the advantage of tying the ceiling to the resources available for paying off the debt.

Third, even if we grant the one potentially sound argument for maintaining a limit — that it disciplines fiscal policy — there are better ways to achieve this goal.

The current setup is completely divorced from the annual budget process, and is thus inefficient and inconsistent. And the consequences of not raising the limit are extreme and potentially harmful to the overall economy.

Indeed, the mere anticipation of government default heightens uncertainty, damages the government’s reputation and authority and increases borrowing costs (ultimately borne by taxpayers). For example, a major scare over raising the ceiling in 2011 led to the loss of the national government’s AAA credit rating at Standard & Poor’s, which blamed political brinkmanship over both the ceiling and broader debt debate for the downgrade.

And given the importance of U.S. debt as an international financial asset, a U.S. default could lead to yet another global financial crisis, among other unintended consequences.

A better way to control spending

Here is a better way to limit the role of federal in the economy and promote fiscal discipline: Rescind the current debt ceiling but impose a statutory limit on the annual outlays of the federal government as a proportion of the nation’s income.

Such a ceiling would discipline federal spending through the established annual budget process. It would force the American people, through their political representatives, to determine how much of the nation’s productive capacity should be controlled by the federal government, and how those limited resources should be allocated across alternative uses.

And a ceiling on outlays is better than a ceiling on the debt-to-GDP ratio or even a balanced budget amendment, since neither of those alternatives necessarily limits the overall size of the government sector. I don’t consider a country in which the government always has a balanced budget — but that controls, say, 50% of the nation’s GDP — a country with a lot of federal fiscal discipline.

Yes, there are always the opportunities for political mischief, and a ceiling on spending might have its own unintended consequences. There are surely many beneficial refinements to consider, such as a spending limit that varies with the state of the business cycle (rising during recessions and falling with expansions).

But I would predict that such a plan would rein in spending and limit the government’s role in the economy more effectively, with less uncertainty and fewer harmful side effects, than the ill-advised, counterproductive and unnecessary debt ceiling we now have.

William D. Lastrapes is a professor of economics in the Terry College of Business at the University of Georgia. This piece was originally published on The Conversation.