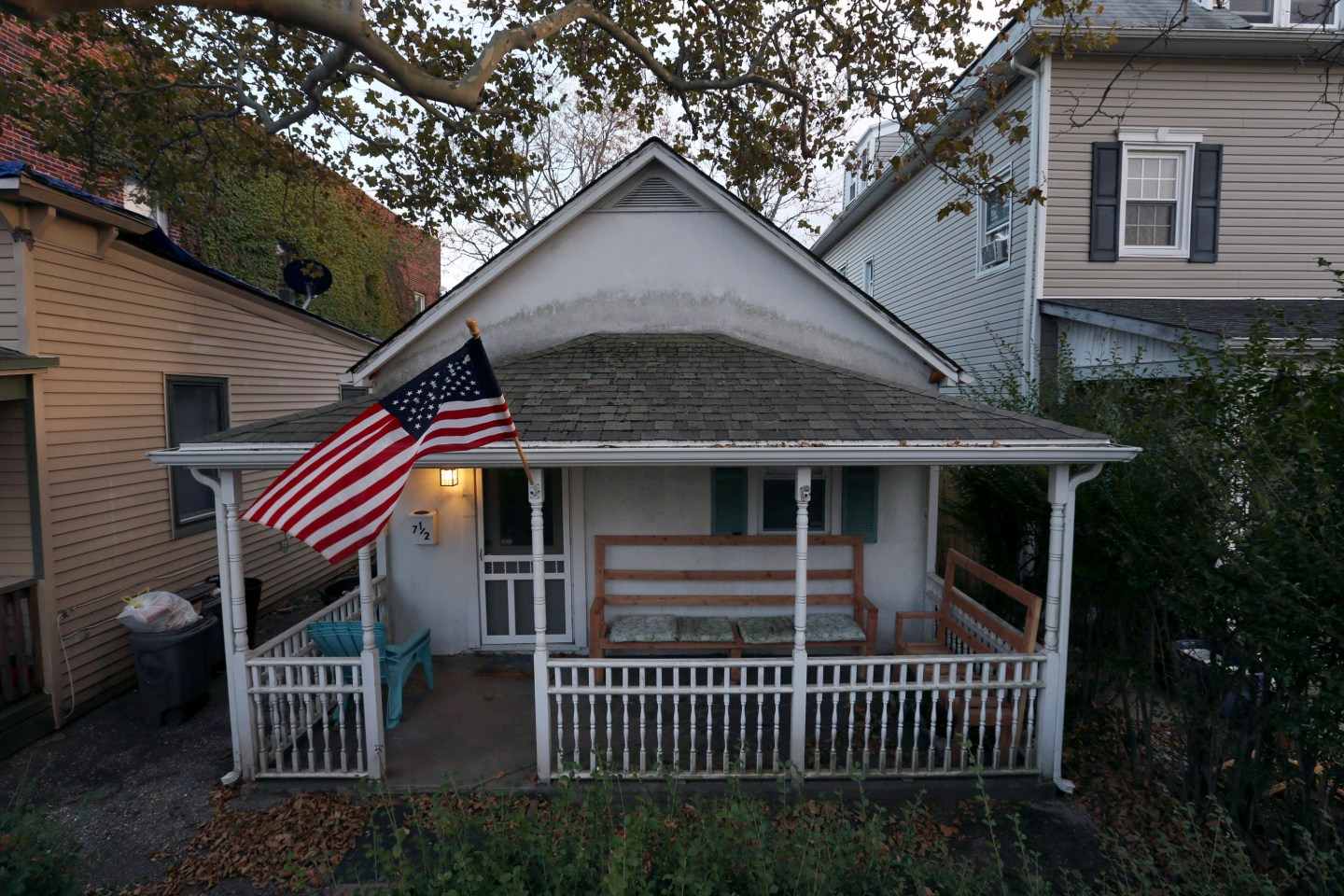 The home where Bruce Springsteen has said he wrote the album "Born to Run" is seen Sunday, Oct. 18, 2015, in Long Branch, N.J. The two-bedroom cottage at 7 1/2 West End Court in Long Branch, owned by three fans of the singer, is back on the market. They bought it in 2009 with the idea of turning the home into a tribute to the New Jersey rock legend, but those plans were derailed. (AP Photo/Mel Evans)
Photograph by Mel Evans — AP

A two-bedroom, 828-square-foot cottage in Long Branch, New Jersey, seems like no standout on thunder road – unless it’s the place where The Boss wrote Born to Run.

It is this piece of Bruce Springsteen’s history that has attracted much attention to a home at 7 1/2 West End Court on the Jersey Shore. Listed at $299,000, this property appears to have a significant “rock ‘n’ roll premium,” as similar places around the area list for anything between $170,000 to $275,000, according to Zillow.

“Yes, I mean, c’mon,” said real estate broker George “Rives” Holder when asked if the Springsteen factor helped raise the home’s value. “We’re talking about the intrinsic value of this house, of the value of Springsteen’s history [with the house]. That’s the buyer willing to pay for that.” While any successful homebuyer is free to do what they want with the home, “it is the hope [of the owners] to find someone with that passion for Springsteen,” added Holder.

Built in 1920, the home was rented in 1974 for a year by Springsteen, months after his second album The Wild, the Innocent & the E Street Shuffle struggled to find an audience. He would move back to Long Branch – his birthplace – and live in this West End Court beach side bungalow in an attempt to craft a make-or-break album.

It was in the living room on an Aeolian piano that, as detailed in interviews given by Springsteen, he wrote “Born to Run,” “Thunder Road,” “Backstreets” and other songs that would end up in his breakout album Born to Run.

“I’d written the lyrics sitting on the edge of my bed in this shack in Long Branch, New Jersey, thinking “Here I come, world!,”” Springsteen once said. “They’re filled with that tension of trying to get to some other place.” In a 2005 documentary Wings for Wheels: The Making of Born to Run, Springsteen is filmed outside the home, recalling his early days (and incidentally, mentioned this was the first house he ever lived in by himself). You can see the house at the 17:25 mark:

Much has been written about the home’s bare-bones interior. In Christopher Sandford’s book, Springsteen: Point Blank, he described the furniture thusly: “Its centerpiece was a moth-eaten sofa salvaged from the alley.” Peter Knobler of Crawdaddy magazine, who is the journalist oft-credited with discovering Springsteen and first writing a profile on him, was quoted as saying the place was “cluttered with motorcycle magazines and old 45s”. Knobler, however, was one of the first to listen to Born to Run in this very home. “It sounded to me like Hit City,” he said.

The house enjoys a curious link to another music legend—in 2009, Bob Dylan was detained by police in the vicinity of the property, and it was suspected he was trying to find the Born to Run home, and check off a bucket list after previous jaunts to homes lived in by John Lennon and Neil Young.

The property has seen a variety of owners, the latest being Springsteen fans Jerry Ferrara, Kim McDermott and Ryan DeCaroli, who bought the place for $280,000 in 2009. According to Holder, the intention was to keep as much of the original Springsteen nostalgia as possible, and to possibly turn it into “a museum or something decorated with Bruce memorabilia, to keep the historical factor there.” But the owners have decided they have no time to upkeep the original vision for the home, and are moving on.

So far, people who have inquired and seen the house, which has been on the market for around two weeks, seem to have little designs of actually moving in. “People want to purchase it for the history, for Bruce Springsteen,” said Holder. “It’s probably not anyone’s primary home, but they could do some sort of rental. Maybe a bed-and-breakfast, themed rooms, with actual [Springsteen] history.”

For more on property values, watch this Fortune video: