This U.S. state could end up like debt-troubled Puerto Rico 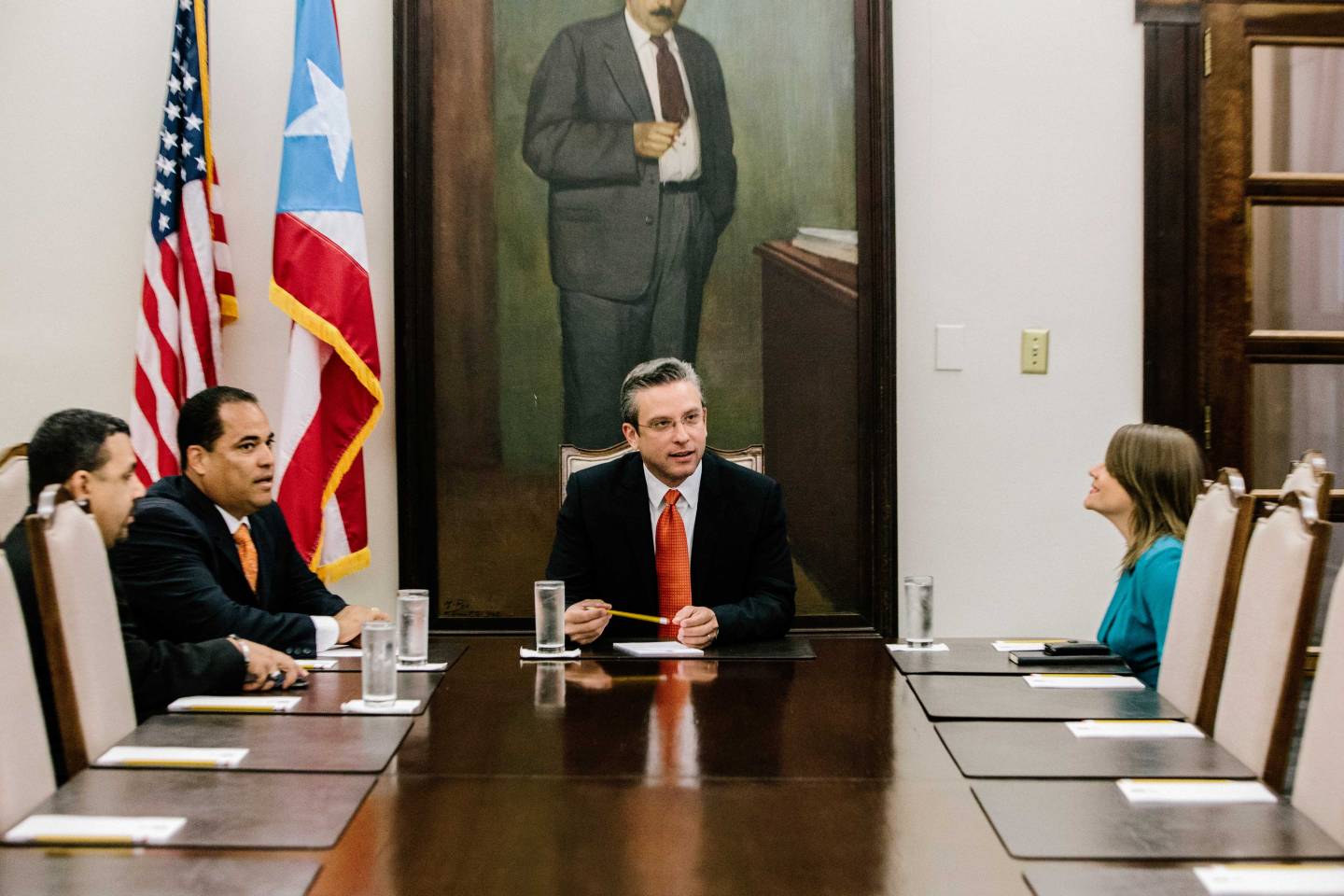 Alejandro Garcia Padilla, governor of Puerto Rico, center, speaks during a meeting with Senator Carmelo Rios, second from left, at the Governor's Mansion, known as La Fortaleza, in San Juan, Puerto Rico, on Tuesday, July 7, 2015. Garcia Padilla said in a televised speech June 29 that Puerto Rico will seek to delay payments on the islands debt for a number of years. Photographer: Christopher Gregory/Bloomberg via Getty Images
Photograph by Christopher Gregory — Bloomberg via Getty Images

Mike Myers’ 1997 movie Austin Powers has a scene in which a character is squashed by a steamroller. The film is a comedy, and the humor in the scene comes from how avoidable the tragedy is. The steamroller starts far away, and moves pretty slowly. But instead of moving to avoid the steamroller, the victim just stands there, screaming “Oh no!” until he’s flat.

Puerto Rico and its creditors are now under the steamroller. As in Austin Powers, the steamroller did not move very quickly. Analyst Sergio Marxuach, for example, warned in 2006 that the Commonwealth’s finances were on an unsustainable path. Marxuach pointed out in his warning that in other cases of municipal distress, for example New York in the 1970s, fiscal discipline had been imposed from above. Puerto Rico’s peculiar status as a commonwealth has meant that discipline from above has so far been unavailable. And discipline from capital markets, though now severe, has been late to arrive.

So after years and years of borrowing, including borrowing to cover operating deficits, Puerto Rico and its government-chartered corporations now have a total debt of $72 billion. This is approximately a year of the island’s Gross National Product. As former U.S. Congressional Budget Office director Douglas Holtz-Eakin said in his September testimony before the Senate Finance Committee, a 10% ratio of interest payments to revenues marks something of a ‘bright line’ way to identify distressed sovereign borrowers, and Puerto Rico crossed that threshold in March of 2015. In August, Puerto Rico Governor Alejandro Garcia Padilla announced that the island’s debt was unpayable.

So I believe that it is now safe to describe the situation as a crisis. Two competing teams of former IMF economists are now laying out their prescriptions. One team, commissioned by the Commonwealth’s Government Development Bank, says that the only way forward is to impose some debt restructuring on the island’s bondholders. The release of this report coincided with Governor Padilla’s announcement that the island’s debt was unpayable. A second team of former IMF economists, commissioned by a group of hedge funds that hold some of Puerto Rico’s debt, claims that with sufficient fiscal austerity the island can, in fact, pay its capital market obligations. I conclude this from the two competing reports: the end of a long career at the IMF does not mean the end of opportunities to do well-compensated work in warm places.

One can create caricature versions of these two different views that are not as far apart as they seem at first glance. The (caricature) first report: the current debt is unpayable without imposing unprecedented and unacceptable austerity on the island’s residents. The (caricature) second: the current debt can be paid. You just have to impose unprecedented austerity on the island’s residents. The second set of economists make the point that stiffing today’s creditors will make it much more expensive to borrow in the future. The island must choose between firing its teachers today and being unable to finance new schools for the children of tomorrow.

Regardless of which generation of children we decide to punish in this crisis, the blame belongs to yesterday’s and today’s adults. This steamroller did not fall out of the sky – year after year the island failed to balance its books, and closed the difference by borrowing. Without a change in this pattern, the crisis was inevitable.

Whatever happens to the debt, some restructuring of the Puerto Rican economy is essential. Inefficient government monopolies raise the cost of electricity and water on the island. The Puerto Rican minimum wage is the same as in the mainland U.S., even though labor productivity is much lower. And I cannot imagine any serious economist coming out in support of the Jones Act, a protectionist measure that protects the U.S. shipbuilding industry. This much-discussed policy hurts the mainland economy a bit, but is much more damaging for Puerto Rico because of the island’s greater dependence on shipping.

Returning to the debt, competing reports now emerge about potential federal intervention in the situation. Democrats in Congress have introduced legislation that would give government entities in Puerto Rico access to Chapter 9 bankruptcy protection, but this legislation does not appear to have a realistic path towards enactment. Apparently credible reports of a Treasury-sponsored ‘superbond’ plan, through which the island’s debt would be consolidated, have now been denied by Treasury spokesperson, although officials have met with the indebted U.S. territory’s leadership to discuss how the federal government could help.

One type of federal intervention would be a bailout, but the current prices of Puerto Rican bonds seem to indicate that this is unlikely. On the other hand, a presidential election is on the horizon, and Puerto Rican voters in Florida are an important group in a potentially decisive swing state. I suspect that either of our political parties, if offered the presidency for the price of a bailout, would find a way to get comfortable with it. But Puerto Rico is just one issue in a very complicated election season, so I think that any help from the federal government simple enough to be described only with the word ‘bailout’ seems unlikely.

All that I am confident about now is that there will be litigation, that the litigation will be expensive, and that the people of the island, one way or another, will bear most of the costs.

Are there any lessons in the Puerto Rican experience that might be applied elsewhere? Well, at the end of 2010, Meredith Whitney created a stir in the municipal finance market, warning, in effect, that the steamroller was upon us. She claimed that a massive wave of municipal defaults would materialize in a matter of months.

At the time, many market participants argued that Whitney’s predictions were way off the mark. Harvard’s Randy Cohen and I wrote a paper in response to her statements, but our voice was just one among many. We argued then that in most places, there was still time, with responsible political behavior, to avoid the steamroller. Now five years later, the massive wave of defaults Whitney predicted has not materialized on anything close to the timetable she described.

But we are now five years on, and there are certainly places where the steamroller is closer in 2015 than it was in 2011. One feature of American municipal finance is that states and municipalities, in general, have rules that prevent them from borrowing in order to cover budget deficits. In practice, this rule means only that they have to employ trickery in order to accomplish the economic substance of borrowing to cover deficits while technically complying with balanced budget rules. The most important channel for this trickery has been through pensions, as Robert Novy-Marx of the University of Rochester and Joshua Rauh of Stanford have highlighted in a series of papers. There are other channels as well.

In the humorously named ‘Truth and Integrity in State Budgeting,’ the Volcker Alliance examines the situation in New Jersey. The report focuses on the recent financial chicanery that the state has employed in order to ‘balance’ its budget. A relatively simple example (and New Jersey is not alone here) is the issuance of bonds whose above-market coupons mean that they can be issued at prices above par, with the difference between the offering price and par value being used as revenue in the current fiscal year. This trick is just a back-door way for New Jersey to do borrow to close a budget shortfall, just like Puerto Rico.

Other examples are more complicated. The coverage of New Jersey’s catastrophic recent tobacco bond refinancing by Cezary Podkul of ProPublica has been an example of great journalism about an extremely convoluted financial topic. I think that only the deal’s complexity has prevented this and other similar transactions from becoming even greater national scandals than they have been. Tobacco bonds stem from the 1998 Tobacco Master Settlement Agreement, through which states gave up legal claims against tobacco manufacturers in exchange for future payments tied to tobacco consumption. Like many states, New Jersey years ago securitized much of it future payment stream, selling the future receipts off to investors in exchange for upfront cash.

The recent tobacco bond refinancing transaction boils down to this: New Jersey received $93 million in budget relief today in exchange for $400 million over the next several years. Some additional net payments based on smoking patterns decades into the future give the deal enough complexity that, should the need arise, a team of suitably incentivized experts will be able suppress their laughter while certifying that the deal was a good idea for the state.

But it’s bogus. It is borrowing to cover a budget hole, like Puerto Rico in 2006. It is a step in the direction of the steamroller that is now on top of Puerto Rico.

Daniel Bergstresser is an associate professor of finance at Brandeis International Business School. The views expressed here are his own and not necessarily those of Brandeis. Bergstresser is also engaged in consulting activities for financial institutions, but he has no direct or indirect financial stake in the performance of municipal bonds issued out of either Puerto Rico or New Jersey.