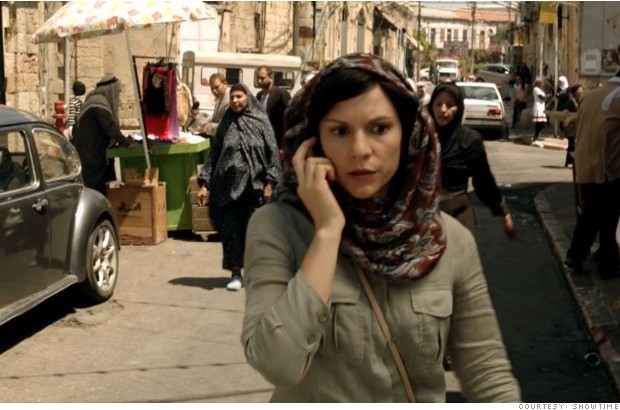 A recent episode of Showtime’s “Homeland” includes Arabic graffiti. But those messages reportedly attack the show, according to The New York Times.

In fact, the messages that were spray-painted along walls of a fake Syrian refugee camp state things like, “‘Homeland’ is racist,” “There is no ‘Homeland'” and “‘Homeland’ is not a show.”

The publication reported that Egyptian artists Heba Y. Amin, Caram Kapp and Stone said they were the ones to spray paint the messages after being hired to make the camp more authentic. The spray paint was aired in Season 5, Episode 2 of the television program.

“The series has garnered the reputation of being the most bigoted show on television for its inaccurate, undifferentiated and highly biased depiction of Arabs, Pakistanis and Afghans, as well as its gross misrepresentations of the cities of Beirut, Islamabad — and the so-called Muslim world in general,” the artists said in a joint statement posted to Amin’s website. “For four seasons, and entering its fifth, ‘Homeland’ has maintained the dichotomy of the photogenic, mainly white, mostly American protector versus the evil and backwards Muslim threat.”

“We wish we’d caught these images before they made it to air,” said Alex Gansa, the co-creator of “Homeland,” said to the newspaper. “However, as ‘Homeland’ always strives to be subversive in its own right and a stimulus for conversation, we can’t help but admire this act of artistic sabotage.”

In an interview with the publication, Amin added, “The framing of events and brainwashing about the region has a real impact on foreign policy because millions of people are getting their information from the show and can’t differentiate between facts and fiction. No doubt that it looks good and is well acted, but I had boycotted the show as it is so frustrating and insulting to watch it.”