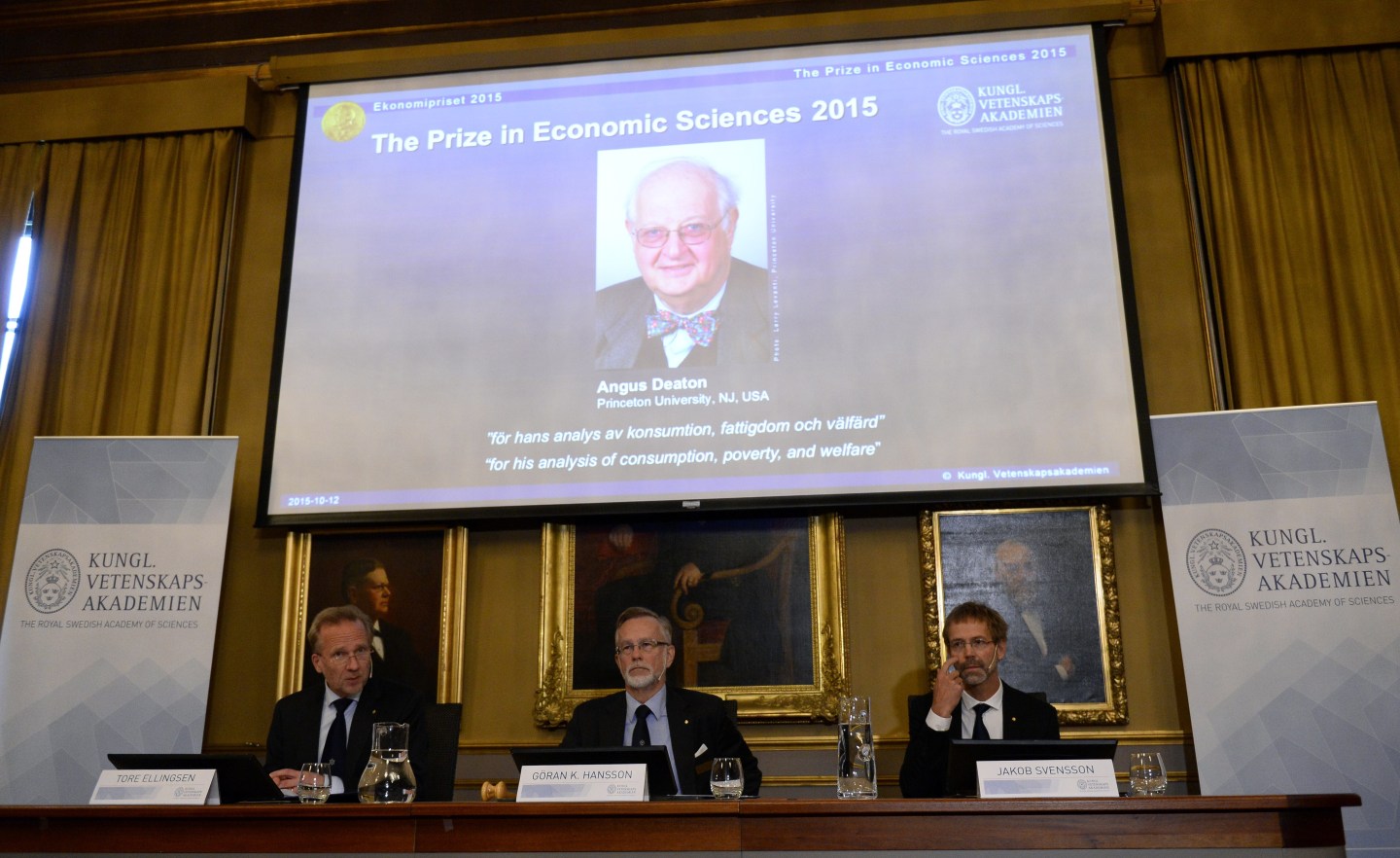 Goeran K Hansson, Permanent Secretary of the Royal Swedish Academy of Sciences (C) announces Angus Deaton of Britain as the winner of the 2015 Nobel Economics Prize next to members of the prize committee Tore Ellingsen (L) and Jakob Svensson on October 12, 2015 in Stockholm. The economics prize is the only Nobel not originally included in Alfred Nobel's last will and testament. It was established in 1968 by the Swedish central bank to celebrate its tricentenary. AFP PHOTO / JONATHAN NACKSTRAND (Photo credit should read JONATHAN NACKSTRAND/AFP/Getty Images)
Photograph by Jonathan Nacstrand — AFP/Getty Images

The world: Is it going to hell in a hand basket? Or is life improving?

The answer to this question likely depends upon one’s personal outlook. If you ask Angus Deaton, the Scottish-born Princeton professor who on Monday won the 2015 Nobel Prize in economics, however, he will supply a cheery answer. As he writes in his 2013 book The Great Escape: Health, Wealth, and the Origins of Inequality, “Things are getting better, and hugely so.”

Deaton is an optimist. His reading of history, as laid out in his magnum opus (cited above), suggests one of progress. He argues that poverty, death, and isolation are in global decline; in his view, there has never been, on the whole, a better time to be alive.

Why Deaton? According to the selection committee, Deaton earned the award for three major contributions to the field. First, for his development of a tool in the ’80s—the Almost Ideal Demand System—which models how consumers spend their money, or “how the demand for each good depends on the prices of all goods on individual incomes.” Second, for his research in the ’90s, which countered prevailing macroeconomic theories of consumption—or consumer spending—by pointing out the flaws of aggregate data. (Individual data is just as key, he argued.) And third, for his pioneering use of household surveys to collect more accurate, empirical, individualized economic data in developing countries.

Deaton has every reason to be optimistic, of course. He is an eminent man of letters with a cushy gig at an Ivy League institution. He was born in the developed world and has won no small number of awards, fellowships, and honorary degrees, throughout his distinguished career. To that list, he may now add that he is the proud owner of a coveted piece of Swedish bling, so to speak. Who wouldn’t he be optimistic given those laurels?

“Deaton is surely aware that many readers will view these claims with skepticism,” New York Times reporter David Leonhardt acutely observes in his review of the economist’s 2013 master work, “especially coming from someone whose discipline often seems to elevate money over basic human needs.”

Deaton is the first to acknowledge that inequalities exist. There is disease, famine, war. Amid his acceptance of the award, he cited rising inequality and climate change as troublesome trends. Generally speaking, however, the proponent of education and a critic of foreign aid contends that the data show cause to be sanguine. Life expectancy is up. Destitution, down. Economic development—depending where you look—climbing apace.

“I do foresee a decrease [in poverty]. We’ve seen a remarkable decrease over the past 20 years, and I do forecast that will continue,” Deaton said after receiving the prize, reports CNN Money. “But I don’t want to sound like a blind optimist.”

To summarize the man’s life’s work, as his Panglossian book blurb asserts: “The world is a better place than it used to be.”