These hotels have the best service in the world 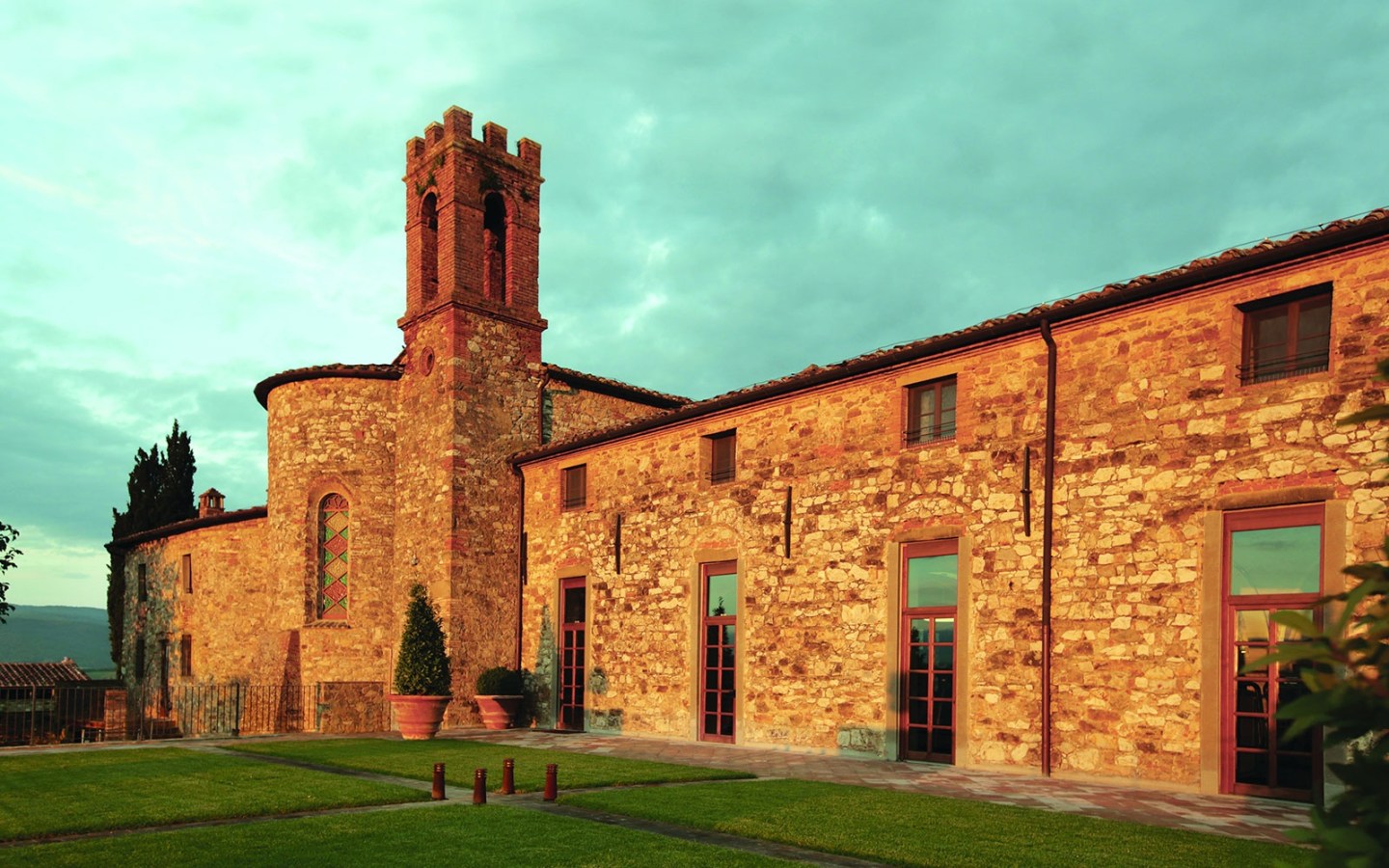 When Amber Gibson checked in at London’s The Goring Hotel this past June, she was encountered a common annoyance of travel: her room was not ready yet.

“They graciously apologized  and asked if they could ‘bother’ me to have a glass of champagne at the bar  while I waited,” says the food and travel writer from Chicago. “Umm, yes—you can ‘bother’ me every day of the week with a  glass of champagne.” Gibson loved her “sumptuous suite,” she recalls, “but it  was really the service that was most memorable.”

Gibson wasn’t the only person to get such friendly treatment from The Goring: the Belgravia hotel made the top 10 among Travel + Leisure readers for the best hotel service in the world.

Among the top 20 winners (including a six-way tie for first place, and a four-way tie for No. 20), service goes far beyond helping you with your bags. A few winning hotels offer round-the-clock butler service, and several winners employ concierges who belong to the prestigious Les Clefs d’Or. One winning hotel in London even boasts that its staffers outnumber guests by two to one. But readers also applauded hotels that offer intangible service: friendly staffers who seem authentically warm, rather than merely polite.

Certainly, The Goring did more to win Gibson’s loyalty than just ply her with bubbly. After checking in, she realized she’d left a sweater at another hotel. She asked The Goring to give that property a heads-up that she would come to get it. “There was no need,” she says. “When I  got back after lunch, it was already hanging in my  closet.  I don’t think I’d stay anywhere else in London now. The Goring really won  my heart. ”

10. The Oberoi Rajvilas in Jaipur, India

This opulent resort on the grounds of an 18th-century Shiva temple made readers swoon so much that they ranked it in Asia’s top 5 for romantic ambience. Adorned with gold-leaf frescoes and chandeliers, the resort could even spoil you for camping: Aside from its plush rooms and villas, the resort features several luxe tents, accented with block-printed fabrics, golden thread and post-maharaja-era A/C. And lest you think you could lose yourself in the 32 acres of resort grounds, you can always call reception, using one of the path-side phones, and request that a golf cart come fetch you. Even with its over-the-top vibes, the hotel ranked highly for good value.

This all-inclusive, dude-ranch-style resort in the Bitterroot Valley successfully lassoed the affections of readers, who liked that their itineraries were tailored nicely to their tastes—whether that meant wine tastings, fly fishing or escorted cattle drives. Readers applauded the friendly, above-and-beyond staffers, who pride themselves on overhearing your wishes, then granting them—like finding that pretty feather you saw on the trail; readers also liked the fabulous log cabins with stone fireplaces and high-end Western art. The hotel tied for third in the U.S. for its upscale take on ranch cuisine, like grilled Texas quail with bourbon sauce, or espresso mousse for dessert.

8. Inn at Palmetto Bluff, A Montage Resort in Bluffton, SC

Comprised of 50 porch-screened cottages, surrounded by live oaks and Spanish moss, this resort ranked at No. 1 in the survey for families, perhaps because it’s the kind of place where you can happily stay put for the whole vacation. You get free use of bicycles during your stay, and the kids club offers such diversions as pirate treasure hunts, crabbing lessons or pointers from the resort’s golf instructors. Since the kids are occupied, the grown-ups have more freedom to play tennis, go horseback riding or just sit in a rocker—an activity called “porching” here—while being handed a glass of sweet tea. The resort is about to expand by 150 more rooms, but still ranked at No. 5 in the world for its quaint design.

Whether or not you need to take the house Rolls-Royce or helicopter from the airport, this Peninsula ranked as the No. 1 hotel in Asia for business travelers, and No. 3 in the world. Once you’ve checked in, you can also ride, for free, one of the hotel’s four shuttle boats, which make nearly 650 trips a day to three area piers. The hotel made the survey’s top 5 for its executive-friendly rooms (all of which have views of the Chao Phraya River): they come with two international-direct-dial phones, your own fax number and a fresh bowl of fortifying fruit every day. For decompressing after your meetings, the hotel’s spa—featuring the signature Royal Thai massage, unlocking 10 pressure points—also ranked in the world’s top 10.

This 28-room townhouse-turned-hotel in Knightsbridge was praised by readers for feeling like a comfortably plush home—one run by friendly staffers who are known to arrange for a guest’s birthday cake without being asked. One staffer in particular was named repeatedly: Antonio the bartender, beloved for his disarming demeanor and world-class martinis. Even if you never venture into the hotel’s intimate bar, you’ll be greeted on arrival by a glass of bubbly or a cup of freshly brewed tea. Rooms are regularly re-stocked with fresh flowers and fruit, as well as nightly treats and an old-school hot water bottle.

Readers were exuberant about this hotel, which was built around a 10th century castle on 4,200 acres, because they felt immediately connected to the Tuscan landscape: The hotel also won 1st-place ties in categories such as romance, design and cuisine. All rooms come with welcome bottles of estate-made extra virgin oil and vino, while the bilingual concierges can help set up dinner reservations, tours or cooking classes. Indeed, the “home cooking” at the hotel’s Ristorante Tosca may have been a big part of guests feeling connected, too, thanks to dishes like the spinach risotto with duck breast and raspberries, or house-made Sicilian pistachio spaghetti with wild boar from the hotel’s preserve.

4. The Inn at Little Washington in Washington, VA

Courtesy of Inn at Little Washington

At first glance, this small property in rural Virginia is primarily a foodie magnet, run by James Beard Award-winner Patrick O’Connell. But readers awarded it the first-place tie for service because they said they were treated as though there was just one room here, not 24. Housekeeping tidies up your room not once (or twice) but three times time a day, and your rate includes both breakfast and afternoon tea. One reader liked how his waiter, at breakfast, drew him a map of local produce stands worth visiting. The locally-sourced restaurant—with a menu emphasizing classic French cuisine and a 14,000-bottle wine cellar—also earned the Inn at Little Washington the No. 1 cuisine ranking among U.S hotels.

3. The Goring in London

Courtesy of The Goring

This is where Kate Middleton stayed before her royal wedding, and readers gush that they love this hotel because the staff has a knack for learning your name quickly, and making anyone feel like a VIP. (The hotel’s head concierge belongs to Les Clefs d’Or, but merely goes by “Big John.”) If you stay in a suite, you’ll even get the automatic services of a footman, dressed in a scarlet tailcoat and a gold-trimmed vest. The 69-room, family-owned hotel also made the top 20 for its cuisine—an elegant take on English classics—and the Goring Dining Room won its first Michelin star this year. For brunch, try the lobster-accented Eggs Drumkilbo, once the favorite of the Queen Mum.

This boutique hotel’s tucked-away location—across from Buckingham Palace’s Royal Mews—gives it an air of exclusivity, but its staffer-to-guest ratio (2 to 1) really brings home the hotel’s commitment to service. The 41 also got raves from readers for keeping you well-fed: the rotating selection of complimentary tea and treats runs from breakfast time until 1 a.m. Despite the upscale environs, readers commented that the friendly service is never stuffy: One commented that the family’s cat enjoyed the pet-friendly property so much that even she didn’t want to leave. With its striking black-and-white rooms, the hotel also made the survey’s Europe top 10 for cool design.

1. The Oberoi Udaivilas in Udaipur, India

This dome-topped resort on the banks of Lake Pichola was once a royal hunting ground, and it tied for first place by still making guests feel like maharajas. Readers loved the private boat ride you take across the lake to arrive at the hotel (and for a fee, you can take a covered shikara back on the water at sundown, for canapés and stargazing). The hotel also tied for first in the survey for its rooms, which come with elegant dark woods and peacock-blue accents (to match the feathered creatures wandering outside), as well as a 24-hour, on-call butler. Given the views of the lake and city, the hotel also ranked at the top for its prime locale.

For more on the hospitality industry, watch this Fortune video:

More good reads from T+L:
• Get Your Tickets to the New York Comedy Festival
• Nanette Lepore’s New Art Gallery is in Her Living Room
• The Newest Ballerinas on Instagram and Hemingway’s Michigan