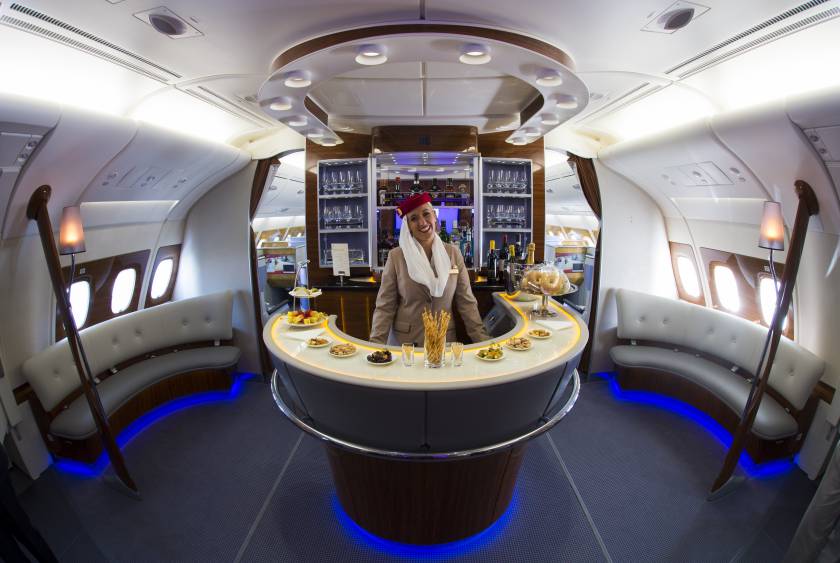 A stewardess poses in the bar of the business class of an Airbus A380 from Emirates airlines during the International Air Show ILA in Schoenefeld near Berlin on May 21, 2014. According to the organisers, 1,203 exhibitors from 40 countries will attend the aerospace trade show running until May 25, 2014. AFP PHOTO / JOHANNES EISELE (Photo credit should read JOHANNES EISELE/AFP/Getty Images)
Johannes Eisele—afp/Getty Images

All Jennifer Aniston wants in her new ad for the Middle Eastern airline Emirates is a shower and a bar to get a drink while flying.

Unfortunately, the stewardesses she talks to simply laugh in her face at the request. The generic U.S. airlines flight she is on only has a towel and packet of peanuts available to the former “Friends” star.

Thankfully, her ordeal is nothing more than a horrible nightmare. Aniston wakes up cozily in her Emirates bed at the end of the saga.

“It was a nightmare,” Aniston says later, once she gets her martini at the bar on the Emirates A380. “I was on a plane and it was nothing like this.”

Aniston’s 60-second spot was unveiled earlier this week and already has over 1.7 million views on YouTube. “Wake up to flying as it should be,” the company proclaims on the video’s page.

Emirates says it has spent $20 million on television slots for the advert, which comes in 30- and 60-second versions and will initially be screened in the U.S. and United Arab Emirates, followed by the U.K., Germany, France, Italy, India and Australia.

Notably, Emirates boasts having the world’s longest flight, which takes place between Dubai and Panama City. It takes over 17 hours to make the trek.

You can watch the full advertisement featuring Aniston here: