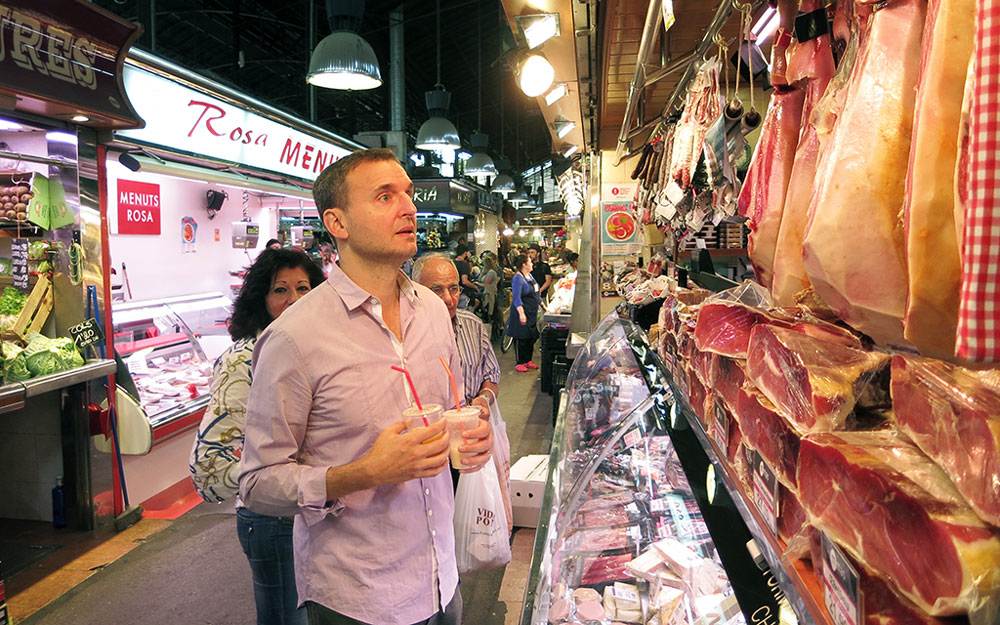 As the creator, writer, and executive producer of Everybody Loves Raymond, Phil Rosenthal has spent a great deal of his career behind the scenes. But for his latest project, I’ll Have What Phil’s Having—which premiered September 28 on PBS—he gets in front of the camera. In each hour-long episode, Rosenthal introduces viewers to a different city through its food, sharing his off-the-cuff reactions to the dishes he tries along the way. Famous chefs like Nancy Silverton and Albert Adrià accompany him as he pounds the pavement in Los Angeles, Tokyo, Hong Kong, Italy, Barcelona, and Paris in search of the best each destination has to offer.

On a recent afternoon, Phil was nice enough to invite me for lunch at Café China, the Michelin-starred Szechuan spot in Midtown—and one of his favorites. Over spicy beef, soup dumplings, and chung king chicken with red chile peppers, he opened up about the show, including his most memorable meals and what it was like to eat ants.

What inspired you to do this show?
For me, traveling is experiencing how the world is getting wonderfully smaller and more combined, and the whole point of the show is to do just that. And when I plan a trip, it’s around food and where are we going to eat. Food and laughs are the way in.

Were you a picky eater growing up?
Yes, but I realized it was the chef. We used to beg, I mean beg, to go to McDonald’s (MCD), as if that was going to be something fantastic. And it was, because it had flavor of some kind. My mom’s gotten little better since we moved out.

When did food become a passion?
The moment I left home. I tell this story about this time I was out with my college friends eating at an Italian restaurant in Long Island. I ask, ‘What is this little thing, it’s delicious. What’s the flavor in here?’ And they said, ‘What, it’s pasta and sauce.” And I said, ‘No, there’s something in here and why is it so good? What are these little white bits?’ They said, ‘What, garlic?’ Garlic, I’d never had garlic! I was living like an animal. How do you grow up and not have that flavor?

What was your favorite meal?
Each city has one, but Tickets in Barcelona, from Ferran and Albert Adrià, was extraordinary. You’re tasting things you’ve never tasted before, done in a way you’ve never seen. It’s like dinner and a show.

In Japan, we did mostly street food and ramen, but Narisawa is a splurge. If you’re going to save up for one big meal, I’d go here. There are just a dozen tables, and chef Yoshihiro Narisawa’s menu is inspired by nature. During the meal, bread is fermented and baked right at the table.

And the pork bun at Hong Kong’s Tim Ho Wan, the least expensive Michelin start restaurant in the world, is one of the most delicious bites of food I’ve had in my life. I think it cost a dollar. I’d rather have that than a fancy French four-star meal that I’m bored to death with. Delicious is delicious—it doesn’t matter what it costs.

One of the cities you explore is your hometown of Los Angeles. Did you discover anything new there?
Absolutely. Everyone lives in a town where there’s something they’ve never tried. The taco expert Bill Esparza took us around various neighborhoods I’ve never been to, including Boyle Heights and East L.A. We passed a plain white food truck you would never stop at called Carnitas el Momo. Bill says here’s where you’re going to have the pork of your life. The carnitas have been braised all day and smoked, and they put the most delicious sauce on it. Bill calls it “aporkalypse now.”

What was the most challenging thing to eat?
Have you heard of a century egg? This is an egg that’s preserved in lime and ash and a lot of other things you wouldn’t associate with food, and it’s a delicacy. The yolk is green and the white is a brownish orange, almost translucent. I was with people from Hong Kong at a hot pot restaurant, and one girl was afraid to try it. So I put the whole thing in my mouth. Then, I hear somebody laughing and it’s my brother behind the camera, because my face lets you know I’ve made a horrible mistake. The first thing you taste is really, really rotten egg. This is then replaced by the taste of overpowering ammonia. This was forever known to me as cat-pee egg. What I learned later is you’re supposed to take a sliver of it like you would an onion.

Was there anything that grossed you out, but ended up actually tasting good?
The ant at Den. The chef told me it was going to taste like lemon. And once you get over the fact that you’re eating an ant—and the crunch, which is sickening—it’s like somebody put a drop of lemon on your tongue. I asked if he sautéed it in lemon, and he said no, this particular ant tastes like lemon. I wonder what a New York ant would taste like?

You react very emotionally to the gelato in Italy. Was there anything else that brought you to tears?
The vanilla tart from Pierre Hermé in Paris. The pastry chef and cookbook author David Lebovitz took me there. According to David, Pierre is an innovator, and does traditional Parisian pastry but with twists on flavors. In this pastry, there are three different kinds of vanilla bean. The intensity of that flavor is a vanilla that you’ve never had before. It was so freaking delicious. And in Italy, the best butcher in the world showed me how to make a steak. I cried there, too.

Was there a chef that you impressed you the most?
I’d probably go with Albert Adria, because of the generosity of his time. He even showed me the local hardware store where him and Ferran got the chemicals necessary to make their famous spherical olive, which has become a cornerstone of molecular gastronomy.

Assuming there’s a Season 2, where would you want to go?
I’d love to do New York. Dan Barber said he would do a segment with us. But I wouldn’t just highlight Blue Hill at Stone Barns. I’d take him to a place like this, or even better Chinatown in Queens. South America would be great; I’ve never been and I want to go. I’ve heard Mexico City may be the best food city in the world. New Orleans, Portland, Chicago—there are so many great cities in the U.S.

What do you hope viewers take away from the show?
You can hate me, hate the way I talk, hate my face, but at the end of each show, you’re going to have a practical list of the best places to go for certain things, which is all I want. I want practical information. Some of the best chefs in the world were telling us where to go. So it’s not my word—we did the research.

For more on food news, watch this Fortune video:

More good reads from T+L:
• Get Your Tickets to the New York Comedy Festival
• Nanette Lepore’s New Art Gallery is in Her Living Room
• The Newest Ballerinas on Instagram and Hemingway’s Michigan