Meet the women making a living as mermaids 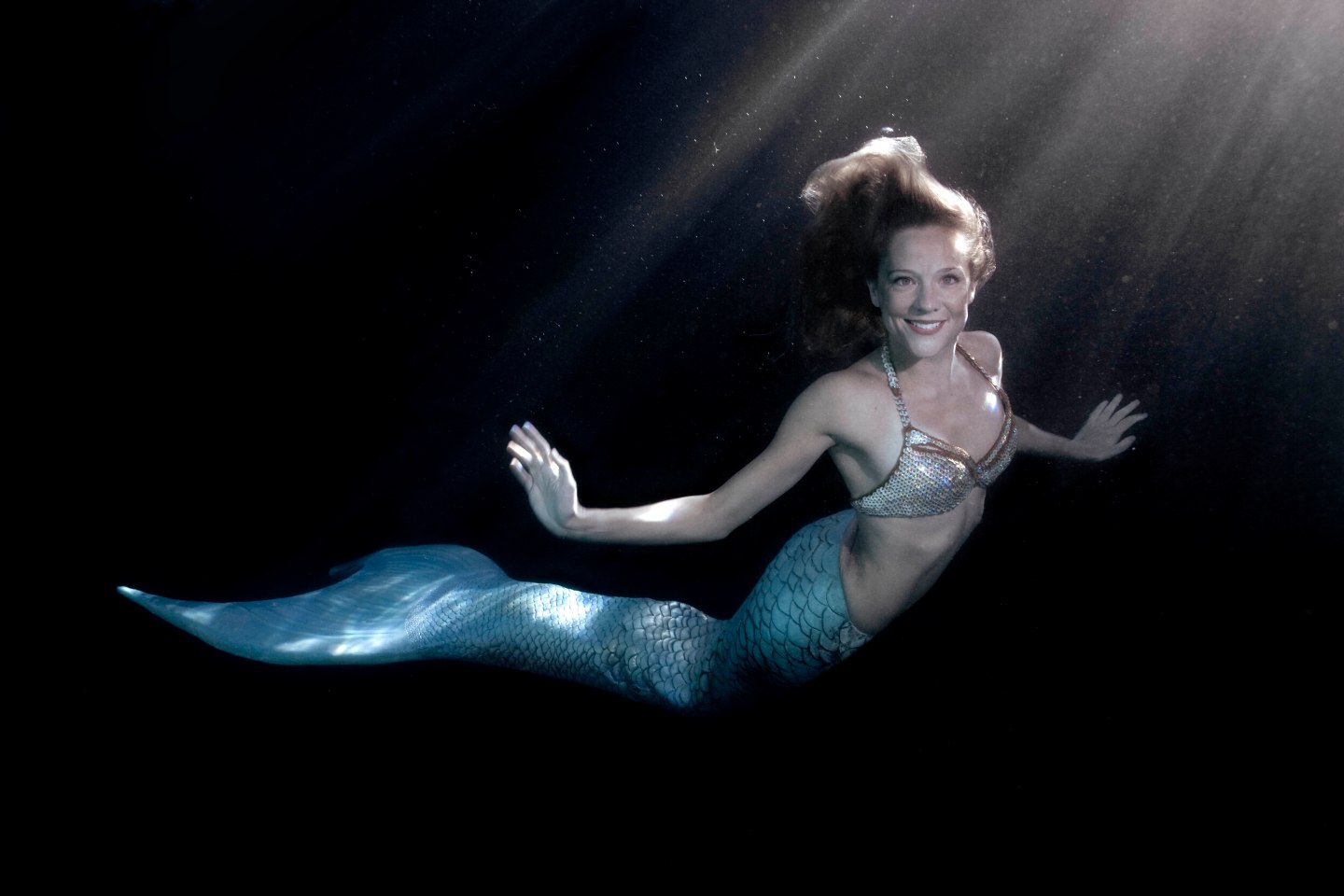 An unexpected trend in the job market has been gathering steam for the past few years. Women have been tying their legs together, strapping 45-pound fish tails onto them and swimming in glass tanks for the viewing pleasure of paying patrons.

They’re mermaids-for-hire, and approximately 1,000 people in the US make a living this way, according to an estimate by Fast Company. That’s not a huge number, but the jobs are definitely there, despite a volatile economy’s best efforts to shake them off.

Investigating this phenomenon does not require passage on a seafaring vessel. Plenty of opportunities exist on dry land. There are companies that produce the mermaid tails, mermaid gym classes and mermaid conferences, such as the North Carolina Merfest. Next scheduled for September 2016, it’s an annual gathering of mermaids, mermen and members of “the pirate community,” who help the mer-folk deal with logistical concerns, according to festival organizer Chris Chandler.

“When mermaids perform in their tails, they can’t move their legs, so they need assistants to help pick them up and move them around,” he told Fortune. “Usually, a couple that perform will have ‘mer-tenders’ dressed as pirates. They use the pirate genre to keep illusion intact.”

He said that the gathering normally draws a modest but dedicated number of attendees.

“The last one we had in January, we had about 650 people, mostly professionals in the field,” he said. “We had a couple of folks from France, Italy, Australia… mostly the domestic U.S., but a good group from all over the world.”

While an undersea life, free from the pressures of the workaday world, certainly sounds tempting, there are points to consider before you to tender your resignation to your current employer and strap on a monofin. For example, the custom silicone mermaid tail alone can set you back over $2,700. Once you have that, an investment in some classes, such as those given at LA Mermaid School for $40 is probably wise.

Fortune spoke with three women who have found work as mermaids and asked them about their experiences. They described a lot of physical toil and, in some cases, some real challenges making ends meet. However, it was clear that none of them would trade the experience for anything.

“All I could do was dream of the ocean”

Linden Wolbert always felt more comfortable in the water than on land. Despite studying film and science and earning a diploma from Boston’s prestigious Emerson College, she chose to become a professional mermaid, and today, she has her own video series, the Mermaid Minute, and profiles by such news outlets as the Huffington Post to show for it.

She’s been called “a mermaid pioneer,” instrumental in turning “mermaid” into a viable occupation. She refused to take credit for the relative profusion of people doing it today, but she conceded that when she started a decade ago, she didn’t know of anyone else doing it – she simply did what came naturally.

She focused on educating children about ocean conservation and water safety while dressed as a mermaid and from there, her career took shape. She wouldn’t disclose her rates, but she said that the lean years she suffered through early in her career are now firmly in her distant past.

“I finally was able to get, for the first time in my life, a car that worked and didn’t drip oil,” she said. But despite being able to pay her bills, she conceded that the performances sometimes take a toll on her all too human body.

“I come out of performances with backaches, sinus infections and all kinds of weird rashes,” she said.

Recently, she entered into a partnership with Body Glove International that resulted in the creation of the Mermaid Monofin, an attachment for children’s feet that allows them to temporarily become mythical sea creatures for just $29.99. Today, she has a list of such celebrity clients as Jessica Alba, Justin Timberlake and Jessica Biel, who call upon her regularly to perform at their functions.

“I do a lot of their children’s birthdays,” she said of her celebrity clients. “That’s my passion.”

Carli Goodworth is one of many mermaids working at the Weeki Wachee Springs State Park in Spring Hill, Florida. The park has had mermaid shows at its underwater theater since 1947. Goodworth has a full-time job as a middle school gym teacher, but for the past 11 years she’s been fulfilling her childhood dream of being a mermaid, even if it’s only for a few hours a week.

“I heard about the mermaids because I grew up in the area of Weeki Wachee,” she said. “After seeing the show, I would always leave and say, ‘I’m going to be a mermaid when I grow up.’”

Circumstance did not always cooperate. She has had to take jobs on dry land on more than one occasion, including a stint at a men’s clothing store that helped pay her college tuition. Still, being a part-time mermaid brings plenty of glory her way.

“Everyone hears about the mermaids, and being able to say I am one is kind of like being a local celebrity,” she said.

Goodworth earns $13 an hour, so she’s not exactly mermaiding for the money. She also echoed Wolbert’s sentiment that it’s a very physically demanding job.

“Being a mermaid requires a lot of athleticism,” she said. “In order to swim your first show, most girls train for many months, and it takes over a year to swim all the parts.”

Still, she’s not about to mothball her silicone tail any time soon. Her enthusiasm for the work is evident, and it keeps her coming back for more.

“It’s a very magical job, from getting to actually live a fairytale life to getting to see little girls’ faces light up when they see a real mermaid,” she said. “Every little girl’s dream is to become you at that time.”

“I welcome the curiosity”

Mermaid Melissa is so dedicated to her lifestyle that “Mermaid Melissa” is her actual, legal name. Her previous work experience includes such jobs as trainer for underwater entertainers, marine mammal trainer and lifeguard, so her work today comes as little surprise.

“I have been called a mermaid for most of my life, because of my strong swimming skills and love for the ocean,” she said. She wouldn’t disclose her rates, but she said that her work involves a lot of moving parts and a lot of travel, which she admitted doesn’t come cheap.

“Mermaid tank rentals require delivery, set up and my team to assist with the project,” she said. “Most of what I do involves traveling.”

She said that the downside to the job, apart from the physical demands, is the strong possibility of getting sick from spending whole days in cold water. However, she preferred to focus on the positive aspects.

“I like the reaction of the crowds during live shows, and interacting with people after a performance,” she said. “I welcome the curiosity.”