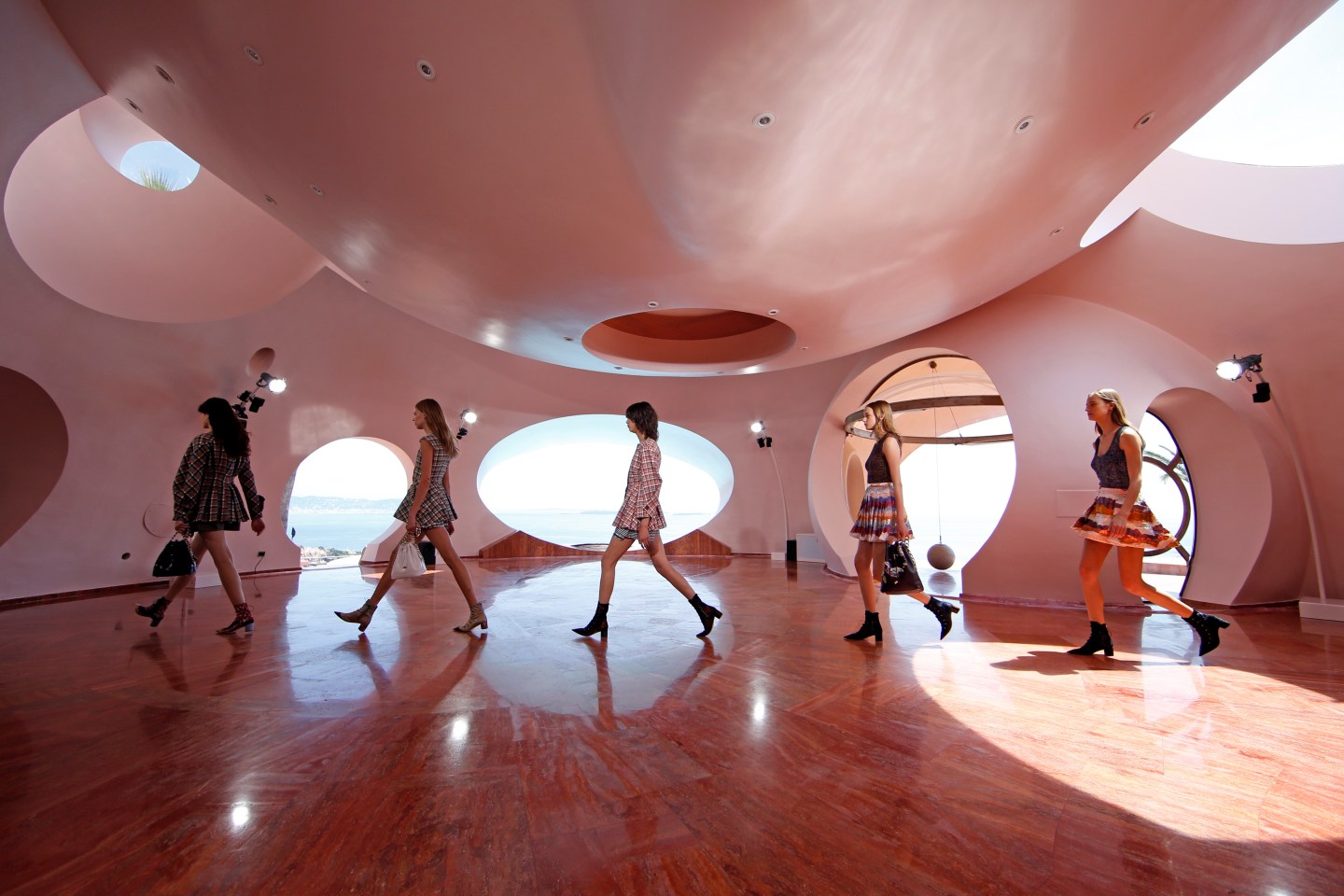 Models present creations by Belgian designer Raf Simons for Dior's women CRUISE 2016 collection during a fashion show at the Palais Bulles (or Palace of Bubbles) by Hungarian architect Antti Lovag in Theoule-sur-Mer, near Cannes, Southern France, May 11, 2015. The 68th Cannes Film Festival will run from May 13 to 24, 2015. REUTERS/Benoit Tessier - RTX1CHSI
Photograph by Benoit Tessier — Reuters

Legendary designer Pierre Cardin is selling one of his most unusual fashion statements, his singular home on the French Riviera, Le Palais Bulles (“palace of bubbles”). The price isn’t disclosed on the listing from estate agent Charles-Henri de la Grandière, but the Daily Mail reported the price as 300 GBP, or about $456 million U.S. dollars.

At once futuristic and primitive, the complex appears to be composed of a series of pink terra cotta orbs, each orb a different room, including ten bedrooms, all curves and rounded doorways and windows. Among the reported inspirations are caves and Inuit villages. But especially important is the structure’s lack of angles. “Round shapes have always inspired me,” Cardin has said. He also compared the house to the body of a woman and said about it, “everything is absolutely sensual.”

Cardin’s space-age bachelor pad is set on six levels on about 1.75 acres on the Theoule-sur-Mer cliffs, with unparalleled 180-degree views of the Mediterranean, an infinity pool, water features cascading into ponds, and an amphitheater seating more than 500 for hosting those personal command performances with the sea as a backdrop.

This unforgettable residence was the site of the Dior 2016 Resort show, held earlier this year, and it hosted other star-studded events over the years such as the James Bond 40th Birthday, when it looked the role of a Bond villain lair. The cost to rent out the bubble house for film festival parties and other events was about $13,000 and it was also offered as a one-of-a-kind vacation rental for about $1,100 per person per night.

Le Palais Bulles was built between 1975 and 1989, the masterpiece of the Hungarian architect Antti Lovag, who called his work “habitologie.”

“Whether for economic reasons or lack of technical solutions, human beings have confined themselves to cubes full of dead ends and angles that impede our movement and break our harmony,” Lovag said, also calling the straight line “an aggression against nature.”

The Bubble Palace first belonged to an industrialist before Cardin bought it at auction in the early 90s. The avant-garde purchase was not out of character for the designer who brought women the bubble dress in 1954, and who later dressed the likes of the Beatles and the Stones. The 93 year-old has more recently bought up dozens of structures in the Provence village of Lacoste, including the chateau of the Marquis de Sade, revamping them with his own imprint.

If the Bubble Palace sounds like an Instagrammer’s dream, it is. To view many more photos of the distinctive residence, see the listing .