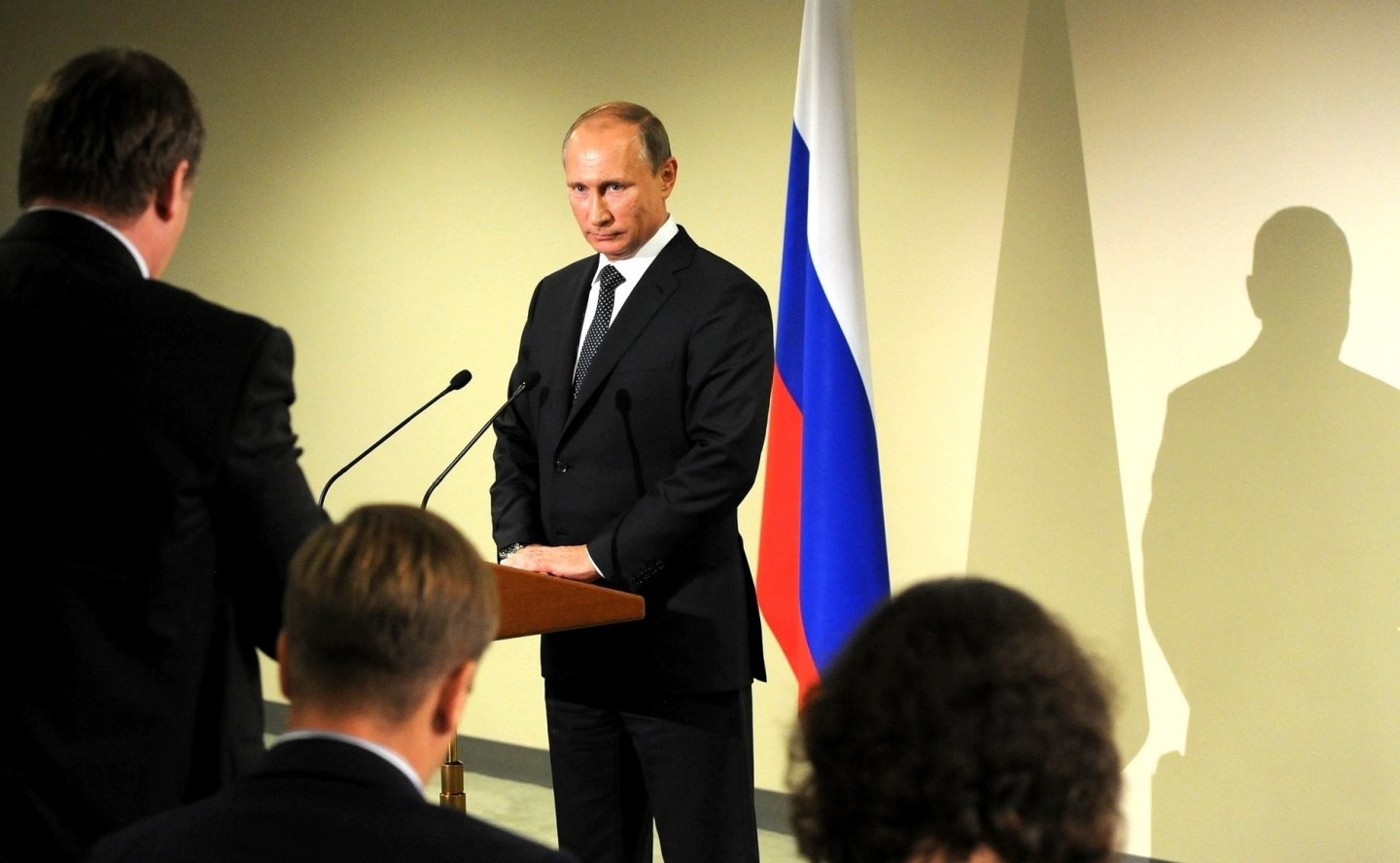 For those watching closely, the signal for Russia’s first airstrikes came in a statement early on September 30 by Kremlin spokesman Sergei Ivanov, just after the upper house of the parliament authorized military operations:

“To observe international law, one of two conditions has to be met — either a UN Security Council resolution or a request by a country, on the territory of which an airstrike is delivered, about military assistance. In this respect, I want to inform you that the president of the Syrian Arab Republic has addressed the leadership of our country with a request of military assistance.”

Within hours, witnesses were reporting that Russian jet fighters were bombing parts of Hama and Homs Provinces in western Syria. Activists said scores of people — almost all civilians — had been killed, disseminating videos and photographs of slain or injured children.

Putin called the airstrikes a “preemptive” operation against the Islamic State — the official reason for Moscow’s military escalation inside Syria. The Russian foreign minister, Sergei Lavrov, said that “rumors that the targets of these strikes were not IS positions were groundless.” The defense ministry, reporting 20 sorties on eight sites, released video of a supposed attack on an Islamic State headquarters.

But even before the Russian leaders set out their line, witnesses and analysts had confirmed — through videos and geolocation as well as testimony — the real story of Moscow’s gamble: All but one of the targets were areas held by the opposition to Syria’s Assad regime, rather than by the Islamic State’s militants.

Of course, Putin and Lavrov probably knew that their obfuscation would soon be exposed. It was all part of a high-stakes bet that with brazen propaganda, political maneuvers and airstrikes, Russia can save Syria’s embattled president, Bashar al-Assad, from a likely downfall.

Only six weeks before these strikes began, Russia’s efforts to save Assad were floundering. Working with Iran, Moscow had hoped to convince foreign powers to let Assad stay in power during a political “transition.” The U.S. had appeared receptive, and John Kerry discussed the possibility with Lavrov in early August.

But the Saudi foreign minister torpedoed the initiative, humiliating Lavrov at a press conference after their meeting in Moscow by insisting Assad relinquish power before any negotiations begin.

The Saudis’ rejection only deepened Assad’s plight. His weakened army, which lacks serious manpower and remains isolated in parts of Syria, has suffered a series of major defeats since the start of 2015.

Syria’s assorted non-Islamic State rebels had taken much of north-west Syria, including almost all of Idlib Province, so the opposition could establish an alternative government. These rebel blocs had also advanced across the south, along the Jordanian border, while Kurdish militia and the Islamic State held most of the north-east of the country.

Combined with the tanking Syrian economy, the shifting military position raised the prospect that Assad would finally step down — or even that his government would completely collapse. The Syrian air force managed to avert a total defeat, but even this could not stop the rebels capturing government military bases over the summer.

Assessing the situation, a cautious leader might have pulled back from the financial, material and reputational costs of backing Assad. But Vladimir Putin is not a cautious man: When confronted with weakness, whether his own or others’, he clearly prefers to prove his strength with aggressive diplomatic and military moves.

And so Russia laid a different path. Starting in mid-August, Moscow began building up its military position in western Syria.

Russia expanded an airbase in Latakia Province, bringing in 34 jet fighters, about two dozen attack and transport helicopters, a strategic airlifter, and drones. Russia’s ships brought in advanced battlefield armoured vehicles and weapons. Several hundred additional troops were deployed as “advisers” to Assad’s militia, not only in Latakia and Tartous provinces on the Mediterranean, but also near the front-lines in Hama and Homs provinces.

Moscow’s initial denials of an escalation were just show. The message to the U.S. and its partners was still clear: accept the political talks, with Assad retaining power during the negotiations, or there will be military operations.

The ploy was mostly successful. Russia made the campaign palatable with the pretext that its forces were being positioned against Islamic State, allowing the U.S. to replace its opposition with the acceptance of discussions for an “anti-IS” coalition. Britain and Germany agreed that Assad could stay pending a transition, paving the way for the U.S. secretary of state, John Kerry, to say that the Syrian leader did not have to depart on “day one or month one” of a transitional period.

The Saudis, however, would not budge. As their foreign minister, Adel al-Jubeir, repeated: “There is no future for Assad in Syria … One option is a political process where there would be a transitional council. The other option is a military option, which also would end with the removal of Bashar al-Assad from power.”

Russia, which had already carried out drone surveillance to scout targets, then played another card with its airstrikes. Putin, who had proposed a grand “anti-Hitler” coalition in his UN General Assembly speech on September 28, effectively told the world to either join him or stand back as he bombs Syria and props up Assad’s military.

Initially, U.S. officials such as Kerry and defense secretary, Ashton Carter, complained that Washington had been treated rudely, with only one hour’s notice of the Russian operations, and that it appeared Islamic State had not been targeted. But by late afternoon on September 30, their objections were easing.

After a meeting with Lavrov, Kerry put the emphasis on “deconflicting” to prevent an accidental U.S.-Russian clash.

The initial success of Putin’s gamble does not guarantee a long-term payoff. No display of military strength can in itself deal with threats and crises, both inside Syria and in Russia.

Moscow’s warplanes can help the Syrian military keep a hold on its vital defense line, which runs from the Mediterranean to Homs and then to Damascus. But just as the Syrian Air Force has not been able to help Assad’s ground forces reclaim lost territory, Russia’s jet fighters cannot wage a front-line battle against the rebels.

With no prospect of a revitalized Syrian Army, Putin is left with two unpalatable options: to either deploy Russian troops on the battlefield or accept the de facto partition of Syria — allowing the rebels to hold their positions in north-west and southern Syria.

Meanwhile, Putin still has to face down a crisis in the Russian economy: There are difficulties with investment and production, the rouble is in perpetual trouble, prices for oil exports are falling, and international sanctions imposed during the Ukraine affair are biting hard.

The Kremlin has already embarked on a series of anti-crisis measures — and Putin has so far defied the economic difficulties, arguably trying to divert attention from them through Russia’s aggressive approach to Ukraine. But with the Syrian push, he is adding yet another expenditure to the government’s overloaded books. While many Russians are so far sympathetic, with the Orthodox Church giving its blessing to the airstrikes, popular support could dissolve if there’s no quick resolution and the costs continue to stack up.

With the U.S. so far declining to raise a ruckus against Moscow, Putin can hope that Saudi Arabia finally gives way and joins the Americans and the Europeans to support Assad on a temporary basis. If that happens, Putin will have won his bet. But if the Saudis remain intransigent and the Americans’ mood turns sour, his losses could be dire indeed.

Scott Lucas is a professor of international politics at the University of Birmingham. This article originally appeared on The Conversation.