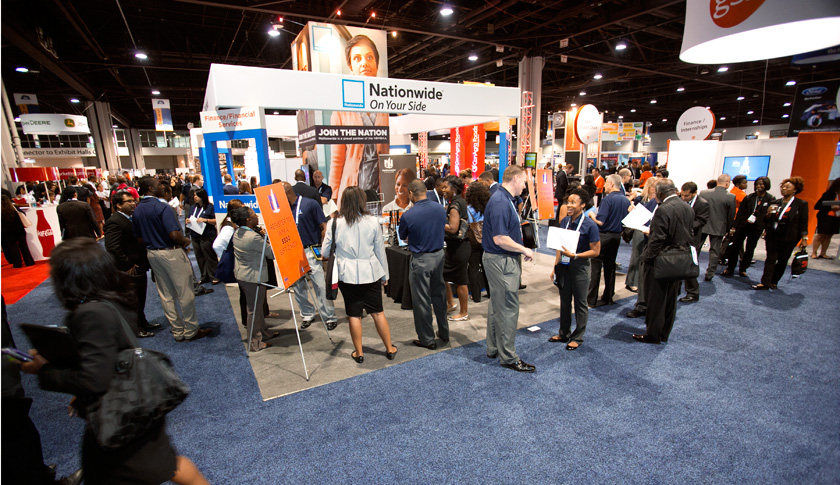 John Davis was a newly minted MBA when he wandered by the Nationwide booth at a job fair, attracted by the banner that said “information technology.” After a few minutes of chatting with the human resources executive who greeted him, he spoke with a chief technology officer at the booth, who scheduled him for a formal interview that afternoon. The next day, he received an offer letter for a full-time job at the Columbus-based insurance company.

“I had no idea Nationwide was giving positions on the spot. I was so overwhelmed with a feeling of accomplishment,” recalls Davis, who is now a business specialist in Nationwide’s Business Transformation Office.

In an era when a job hunt can take weeks or even months, it’s a radical notion to receive a job offer within days of arriving at a conference. Nationwide brings about 80 people to the National Black MBA conference each year, including recruiters and hiring managers, and shows up in similar strength at conferences run by the National Society of Hispanic MBAs and the Anita Borg Institute (an advocate for women in technology). In 2013, the company filled 50 full-time jobs and 92 internships on-site at those three events. (About 45% of interns join the company full-time at the end of their internship.)

“We get a chance to look at some of the best and brightest,” says Nationwide Chief Executive Officer Steve Rasmussen, of the commitment to on-site hiring. “We want to tell them we’re decisive about the kind of people we like and want to work with. It has been beyond our expectations as to what we would get out of this.”

Nationwide is able to make swift hiring decisions by screening candidates starting a few weeks before the conference. Recruiters review resumes, conduct phone interviews and arrive at the event with targeted positions to fill and a list of skills in demand. That positions them to assess potential quickly and make offers, which are contingent on successful background checks and drug tests. “When I was able to see not only did he have the technical acumen, he also had a business presence and a great personality, it was enough to say, ‘This is a person we want on our team,’ ” says Jermaine Henson, the vice president who interviewed Davis that first day of the conference.

Company representatives at these conferences include members of the board of directors and the company’s top HR officer, Gale King, executive vice president and chief administrative officer. New hires can begin to build the relationships that Nationwide considers central to its culture. The focus on relationships can be seen in last year’s 37% growth of membership in associate resource groups, which connect employees with a shared interest or identity, such as work-life balance or LGBT issues.

The investment in people continues as new hires are brought on board, trained and integrated into the workforce, with 11% of employees receiving tuition reimbursement up to $5,250 a year. Managers send notes, emails or make phone calls welcoming new associates. Quarterly meetings with mentors, events and information sessions help orient newbies for a full year, an acknowledgement of how long it can take to get up to speed.

“What we hope from an onboarding experience is that at the end of your first year that the support you received affirms the decision to join Nationwide, that you feel more deeply connected to the culture and values, and that you feel equipped and positioned to be successful,” says Kathy Smith, associate vice president, talent management, and executive development.

At an evening reception the first day at the National Black MBA conference, King affixed a Nationwide pin to Davis’s blazer in a not-so-subtle pitch for him to join the company. “I have an emotional connection to what that day was, to meet the people and smile with and eat with and talk with them. It solidified with me the type of culture that was within the four walls of Nationwide,” Davis says, noting that the people he met at the conference continue to be important in his day-to-day work.

A shorter version of this article appears in the October 1, 2015 issue of Fortune magazine with the headline “Nationwide’s on-the-spot hiring.”