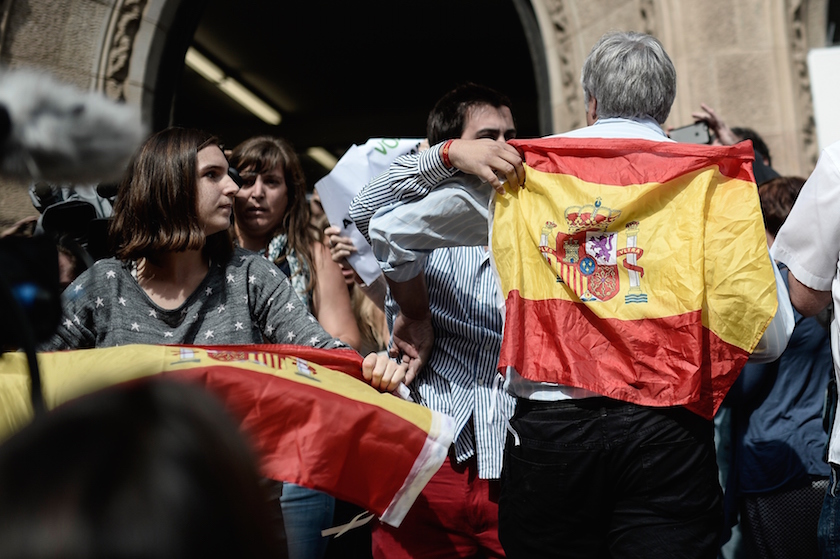 BARCELONA, Sept 27 (Reuters) – Separatist parties are expected to win control of Catalonia’s parliament in an election on Sunday, setting the region on course for a unilateral declaration of independence from Spain, which the central government says is impossible.

Opinion polls show the main secessionist group “Junts Pel Si” (Together for Yes) and leftist party CUP are likely to fall short of 50 percent of the vote, but would still secure a majority of seats in the 135-strong regional assembly.

Both have said that such a result would allow them to unilaterally declare independence within 18 months, under a plan that would see the new Catalan authorities approving their own constitution and building institutions like an army, a central bank or a judicial system.

The Spanish centre-right government of Prime Minister Mariano Rajoy, which has opposed attempts to hold a referendum on secession, has called the breakaway plan “a nonsense” and vowed to block it in court. Spain’s constitution does not allow any region to break away.

Regional government head Artur Mas has said the only way forward for Catalonia was a split from Spain, but many of the 5.5 million voters said on Sunday they did not believe it would become independent.

Many said they had used their ballot as a way to press the Catalan and Spanish authorities to discuss a more favourable tax regime as well as laws that better protect language and culture.

Carmen Marfa, a 65-year-old pensioner from Barcelona who voted for Junts pel Si said she wanted negotiations on those issues to start right after the election.

“Politicians have to roll up their sleeves now, stop their game of chicken and make concessions,” she said after casting her ballot.

Jose Luis Bonet, a 43-year-old architect, said the election was highly confusing and gave a bad image of Spain and Catalonia to the world.

Bonet, who voted for the socialist party, said he is not in favour of independence but that the Spanish state should have accepted holding a referendum on the issue.

“This election is shameful. It would have been much better to organise a vote like in Scotland with debates and proper information so that voters can make up their mind,” he said.

The turnout at 1100 GMT was 35 percent, 5 percentage points higher than in the last regional elections in 2012. Pollsters have said that a high turnout could spur a surprise result.

The secessionist campaign is facing a defining moment. Support for the cause has steadily waned since a peak in 2013 and any failure to achieve a majority would deal a serious blow to the movement.

The vote may also influence the course of the Spanish general election in December.

The main national parties, all seeking to capture more votes in Spain’s second most populous region, have said they were ready to discuss with Catalonia a more favourable tax regime and increased infrastructure spending if they win.

Depending on who forms a government in Madrid, constitutional reform to recognise Catalonia as a nation within the Spanish state may even be on the cards.

Most analysts and politicians say that such talks may take time to organise.

“Only when a final package is adopted and put to a vote will the problem find some form of resolution,” Teneo Intelligence analyst Antonio Barroso said in a note this week.

“Even if secessionist parties are able to remain united – a big if – and continue pushing for independence, any concessions from Madrid would probably help to stymie the movement’s momentum,” he also said.

Financial markets will also be watching the vote outcome. While few investors believe independence is likely anytime soon, the gap between Spanish and Catalan five-year bond yields has been hovering near its widest point in two years.

Spain’s banks, including some based in Barcelona, have warned that secession could cause financial turmoil, while the Bank of Spain has said Catalonia could risk exiting the euro.