What separates Pope Francis from Volkswagen and Donald Trump 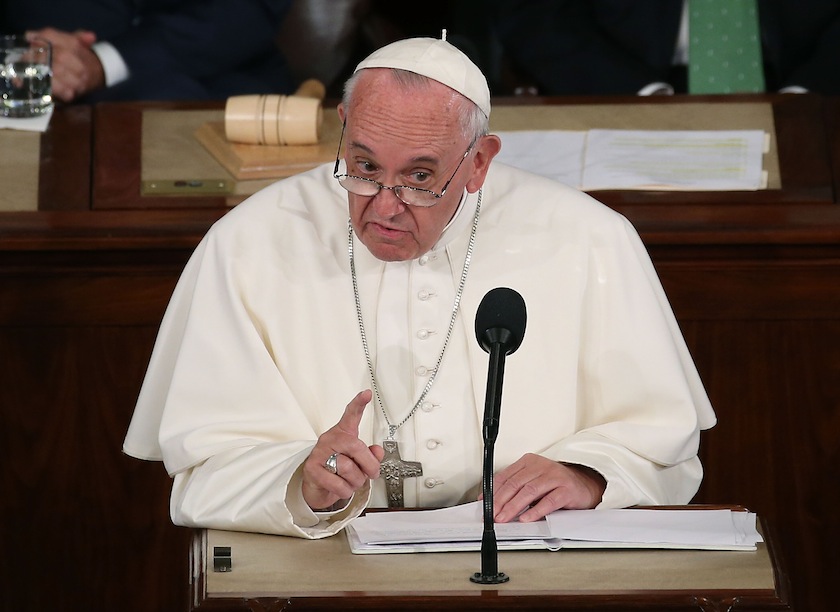 WASHINGTON, DC - SEPTEMBER 24: Pope Francis addresses a joint meeting of the U.S. Congress in the House Chamber of the U.S. Capitol on September 24, 2015 in Washington, DC. Pope Francis is the first pope to address a joint meeting of Congress and will finish his tour of Washington later today before traveling to New York City. (Photo by Mark Wilson/Getty Images)
Photograph by Mark Wilson—Getty Images

Watching Pope Francis speak before Congress yesterday—the first time that a Pope has ever addressed the legislative body—was remarkable not only because of its historical portent. What struck me the most was the fact that he was listened to with reverence and respect, even though many of his words on hot-button topics such as climate change, immigration, and income inequality were considered outright radical by a majority of the people he was addressing.

Here’s just one barn-burner: “Why are deadly weapons being sold to those who plan to inflict untold suffering on individuals and society? Sadly, the answer, as we all know, is simply for money—money that is drenched in blood, often innocent blood.” Had something like this been uttered by another world leader, the reception would have been far frostier.

The Pope received a warm welcome for reasons that go far beyond the fact that he is the leader of a religion that 31% of members of Congress belong to. It speaks to the authenticity that comes through in the Pope’s speeches and actions. Such authenticity is far more powerful than charisma, or good looks, or gravity-defying hair, or even a close connection to God. Pope Francis believes what he is saying. And for this reason, we all listen, even if we do not always agree. It is this intangible quality that makes a great leader.

It is equally obvious when someone is inauthentic. Case in point: Donald Trump. Trump has changed his point of view on many political topics over the years—abortion and Obamacare, for example. Yet he is relatively impervious to accusations of flip-flopping for the sole reason that he himself doesn’t seem to care what such a lack of authenticity might say about him. Trump is ruthless and practical—qualities with their own upsides—and he is smart enough to nod to the ideologues while not quite getting into bed with them. He is politically expedient. But he is not authentic about anything, except for his love of wealth. On this topic, he is 100% committed.

Meanwhile, this week’s shocking scandal at Volkswagen lays bare another kind of inauthenticity, one that hurts not only the planet but also our faith in others. Whatever actually happened at this highly insular auto giant, Volkswagen has been branded since its inception as a car of the people—which is the company name’s literal translation. If you drove a VW, according to the company’s ads, you were likely to be young, a little alternative, and even artisanal. You might be gay (VW was early with ads promoting same-sex couples), you probably recycled, and you weren’t a showoff (let’s leave Audi and Porsche out of it for now).

You were also a dupe. To find that out is a terrible feeling, for the only thing worse than inauthenticity is fake authenticity.

Maybe that’s why the Pope rides in a Fiat.