Syria’s refugees are a golden opportunity for Europe 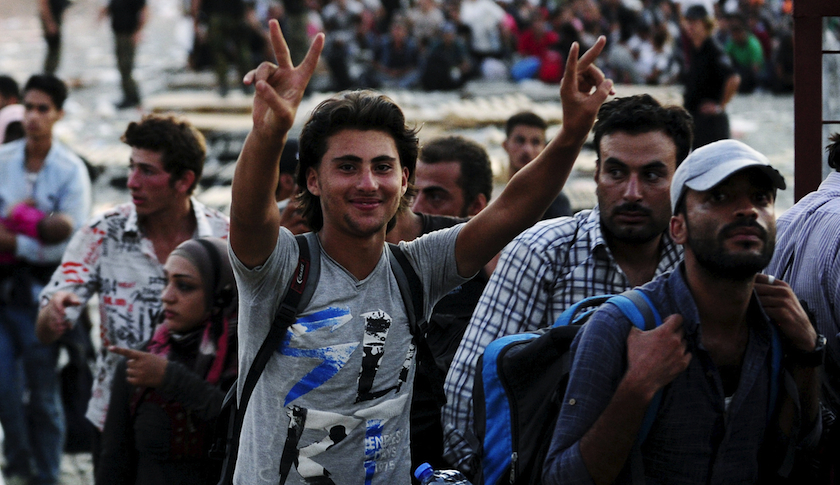 A group of Migrants in Macedonia, near its border with Greece
Photograph by Ognen Teofilovski--Reuters

So much for sanctuary in Germany—at least for the moment. Over the weekend, the nation closed its borders, turning back refugees and halting Austrian trains carrying thousands of asylum seekers. The open-door policy of Europe’s largest economy has its limits: More than 13,000 refugees had flooded Munich on Saturday alone.

The emergency order from the German government was a temporary move, according to Interior Minister Thomas de Maiziere, an opportunity to handle the refugee influx in a more orderly fashion.

However, the dramatic suspension of the borderless Schengen Zone—which allows passport-free movement among 26 European states—appears to have been contagious: Austria, Slovakia, and the Netherlands have followed suit; Hungary and the Czech Republic also increased border controls; and France, Poland, and Sweden are considering similar moves. More than 25 years after the Iron Curtain fell, the walls appear to be going back up.

It wasn’t supposed to be like this. Germany has been expected to welcome 800,000 refugees this year, many from war-wracked Syria, making it the standout among Western developed countries. By contrast, the Obama Administration has pledged that the U.S. will resettle 10,000 Syrian asylum seekers, at least eventually: The process will almost certainly take years, given rigorous background check and security requirements. The panic gripping the EU appeared to accelerate after a meeting of interior ministers in Brussels on Monday failed to come up with a plan, deferring action to the member states.

The refugee crisis presents yet another test for the idea of an integrated Europe. However, the real scope of the crisis is placed in some perspective by what poorer, less populous Middle Eastern states have been forced to accommodate—with far less fanfare—for years.

Of the 4 million Syrians who’ve fled since their country’s civil war began in 2011, the vast majority have crowded into Jordan, Turkey, and Lebanon. Poor, arid Jordan hosts more than 600,000 refugees, who are sorely taxing housing markets and thirstily tapping the country’s rapidly declining water resources. Turkey’s refugee population has skyrocketed this year to almost 2 million. Worst off, perhaps, is tiny Lebanon: 1.1 million Syrians have joined a preexisting population of over 400,000 Palestinian asylum seekers. Today in Lebanon, roughly one in four people is a refugee.

Syria’s neighbors lack the financial wherewithal to handle this burden: Jordan, Turkey, and Lebanon have a combined population of 86 million and a nominal GDP of roughly $900 billion. As a point of comparison, the EU boasts a population of half a billion and a GDP of $18.4 trillion.

Perhaps Syria’s neighbors could accommodate the region’s massive displacement, given proper help. But while humanitarian aid has flowed to the region from the West, by most accounts it is insufficient. According to UNHCR, the UN’s refugee agency, the humanitarian needs of the region’s displaced Syrians tops $4.5 billion this year. International donors have only pledged about 37% of that. Little wonder, say some critics, that refugees are abandoning under-resourced camps in search of a new life in wealthy Europe.

Of course, there are reasons for Europe’s hesitation to take them: a lack of capacity to handle thousands of asylum seekers, for instance, and security concerns, particularly in the aftermath of the Paris and Copenhagen terrorist attacks earlier this year. But some of the opposition is more nationalist and cultural in flavor. In the Czech Republic, Poland, and Slovakia, thousands of protesters have flocked to demonstrations, opposing migration and chanting anti-Islamic slogans. Banners read GO HOME and ISLAM IS DEATH. Hungary’s Prime Minister, Viktor Orban, has opposed accepting Muslim refugees on religious and cultural grounds, citing his country’s occupation by the Ottoman Empire in the 16th and 17th centuries. Slovakia, similarly, has decided to only accept Christian Syrians.

According to the Council on Foreign Relations, the bloc’s inability to craft a comprehensive response to the refugee influx echoes the dynamics of the European debt crisis, in which national interests have taken precedence over collective concerns.

But in this current atmosphere, too little is made of the opportunity presented by the migrants and refugees heading to Europe by train, truck, and raft. Among the refugees attempting to get in are the remnants of Syria’s middle class: doctors, engineers, and teachers fleeing Assad’s barrel bombs in Aleppo, or the reign of terror ushered in by the Islamic State. They bring vitality and opportunity to an aging European continent that badly needs it.

According to the European Commission, the graying of Europe is among the EU’s most serious social and economic challenges. More than one-fifth of Europeans will be 65 or older by 2025, placing great strain on social services and health care.

Integrating young migrants could provide a much-needed demographic boost. And unlike Jordan, Turkey, or Lebanon, Europe has far more resources to integrate them. As reported by CNBC, Pierre Moscovici, European commissioner for economic and financial affairs, has stated that the current migration and refugee crisis should not just be seen in terms of cost, but opportunity.

“It is also a resource—a human resource,” Moscovici said. “Our countries need migration … the economic impact should not just be looked at in a negative way as populists would have it.”

According to the Financial Times, Wolfgang Schäuble, Germany’s finance minister, takes a similarly warm view: The short-term costs are manageable, while the long-term benefits are potentially substantial. Migrants are, generally, a boon to labor markets. Moreover, they pay out more to the state than they take in services, according to separate pieces of research by the OECD and the Centre for European Economic Research.

In light of Europe’s anemic economic recovery, the current refugee crisis, while founded in misery, may be vital to the EU’s future. The data, at least, are supportive. But in facing down the tide of panic that grips many EU states, good data may not be enough.