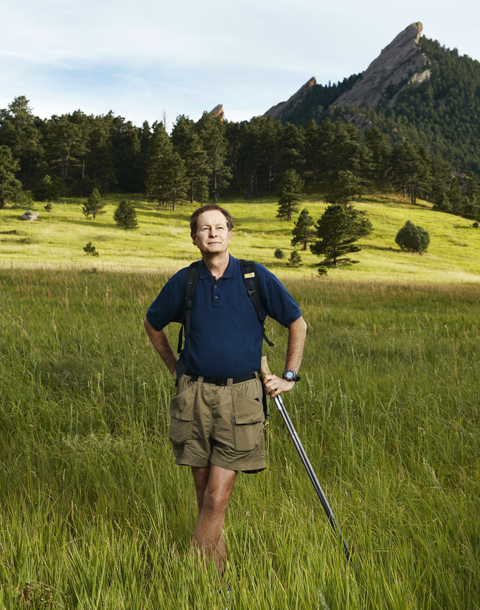 John Mackey is the co-CEO and co-founder of Whole Foods (WFM). He’s a capitalist with a libertarian streak. He’s a vegan, who likes to cook. He’s a voracious reader. He’s a bit of contrarian.

He’s also an avid hiker, so this summer I headed to Boulder to hit the trails with Mackey for a story on “conscious capitalism” in the September 1 issue of Fortune. At 7 a.m. Mackey picked me up from my hotel in his 16-year-old Audi, and we headed for the Walker Ranch Loop. It wasn’t until about halfway up that he realized he’s forgotten his iPhone in the car.

Mackey got into ultra-lightweight hiking when he took a five-month sabbatical from Whole Foods to complete the Appalachian Trail in 2002. On our jaunt in Boulder, he used his 4.8-ounce poles from Gossamer Gear—he bought a 75% stake in the company when it ran into financial trouble. He liked the retailer’s gear and didn’t want it to go out of business. Mackey is a movie buff so I asked what he thought of writer Cheryl Strayed’s pack, affectionately called the Monster, in Wild, which weighed in at 50 to 70 pounds. “Her pack was ridiculously heavy,” Mackey told me.

After the hike, Mackey sent along his gear list. If you want to hike like John Mackey, here’s what to pack: