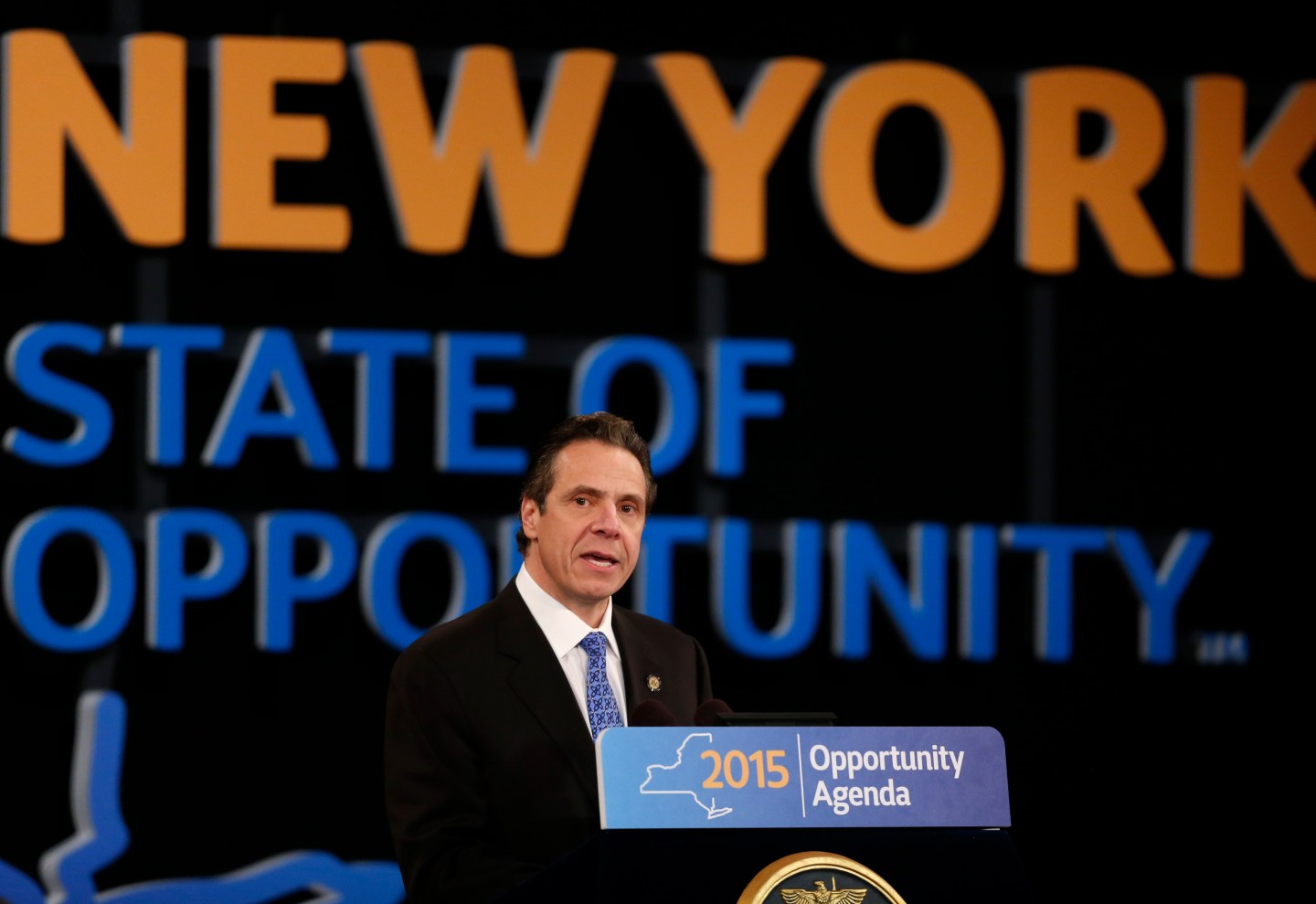 The so-called Fight for $15 is nearly three years old, and in its short history it has achieved significant victories, as cities like Seattle, San Francisco, and Los Angeles have adopted $15 minimum wages.

But so far, all those successful campaigns have come at the city and county levels. That could change thanks to an announcement made by New York Governor Andrew Cuomo, alongside Vice President Joe Biden, on Thursday at the Jacob Javits Convention Center in New York City. Cuomo is seeking a $15 minimum wage for all of New York—the first statewide push of its kind.

“This is a whole new ballgame,” says David Cooper, an analyst at the Economic Policy Institute, a left-leaning think tank. “We’ve seen some of these efforts at city level … but for a state to be proposing it, this is a big deal.”

In announcing the statewide proposal, Cuomo, a Democrat, struck a tone of seeking justice. “Every working man and woman in the State of New York deserves $15 an hour as a minimum wage. [I]f you work full time you should not live a life in poverty, period.”

New York’s minimum wage currently stands at $8.75 and is set to increase to $9 at the end of the year. Some low-wage workers in the state are already expecting an additional pay boost. In July, the state’s wage board suggested raising the minimum wage of all fast-food workers to $15—a recommendation that was approved recently by the state’s labor commissioner. Cuomo was able to target fast-food workers’ wages outside the legislative process because the state empowers the labor commissioner or a wage board to assess whether pay for a particular job is sufficient.

On Thursday, Cuomo said that if fast-food workers deserve $15 per hour, so do construction workers, home health care aides, and taxi drivers. The new minimum wage for fast-food workers “is a great step forward,” he said. “But this is New York, and New York doesn’t believe in just taking one step forward…. Soon we’re walking and soon we’re running.” He said a $15 minimum wage statewide would “herald a new economic contract with America.”

Cuomo is pursuing a legislative route, but it’s unlikely to be a smooth ride. The proposal will no doubt face opposition as it will apply a $6 increase across the entire state, where the local cost of living runs the gamut. The median cost for a two-bedroom apartment, for instance, is nearly three times as expensive in Brooklyn as it is in Buffalo. And a release from the Employment Policies Institute, a conservative nonprofit, on Thursday noted that $15 per hour is close to the median wage in some areas of the state such as Rome, New York, where it’s $15.91. It’s also worth noting that while New York City Mayor Bill de Blasio—with whom Cuomo has an ongoing feud—has called for a $15 hourly rate for the city, he’s suggested a $13 minimum wage for the rest of the state.

Cuomo on Thursday said the proposed $15 minimum wage would be phased in over time, but didn’t offer specifics. Nor did he touch on the state’s diverse costs of living. Instead, he simply said that he wanted to “bring [the] crusade for economic justice to every corner of the the state.”

“For a single state to [set a $15 minimum wage], it’s hard because, yes, certain parts of the state have a higher cost of living,” Cooper says, but “the reality is that we should’ve done a lot more at the federal level in the past 40 years and policymakers at every level of government are trying to make up lost ground.” Cooper says that if the federal minimum wage had kept up with American workers’ productivity, it would be somewhere in the $18 or $19 per hour territory.

Minimum wages haven’t kept up and, as a result, there’s a significant gulf between the appropriate rates—according to Cooper’s calculations—and where wages are now. And that’s why wage increases to $15 per hour so far have come at the local level. The higher cost of living in places like Seattle, San Francisco, and Los Angeles gives lawmakers firmer footing to argue for bigger wage hikes to bring the minimum wage closer to where some argue it should be.

The question is, should an entire state join that group?

Cooper argues that to bring the minimum wage up to a proper level, based on worker productivity, the largest geographic region possible—a state or, ideally, the federal government—should set a “strong wage floor” and let municipalities establish their own rates based on how much it costs to live there.