Your next hotel could offer a virtual reality experience 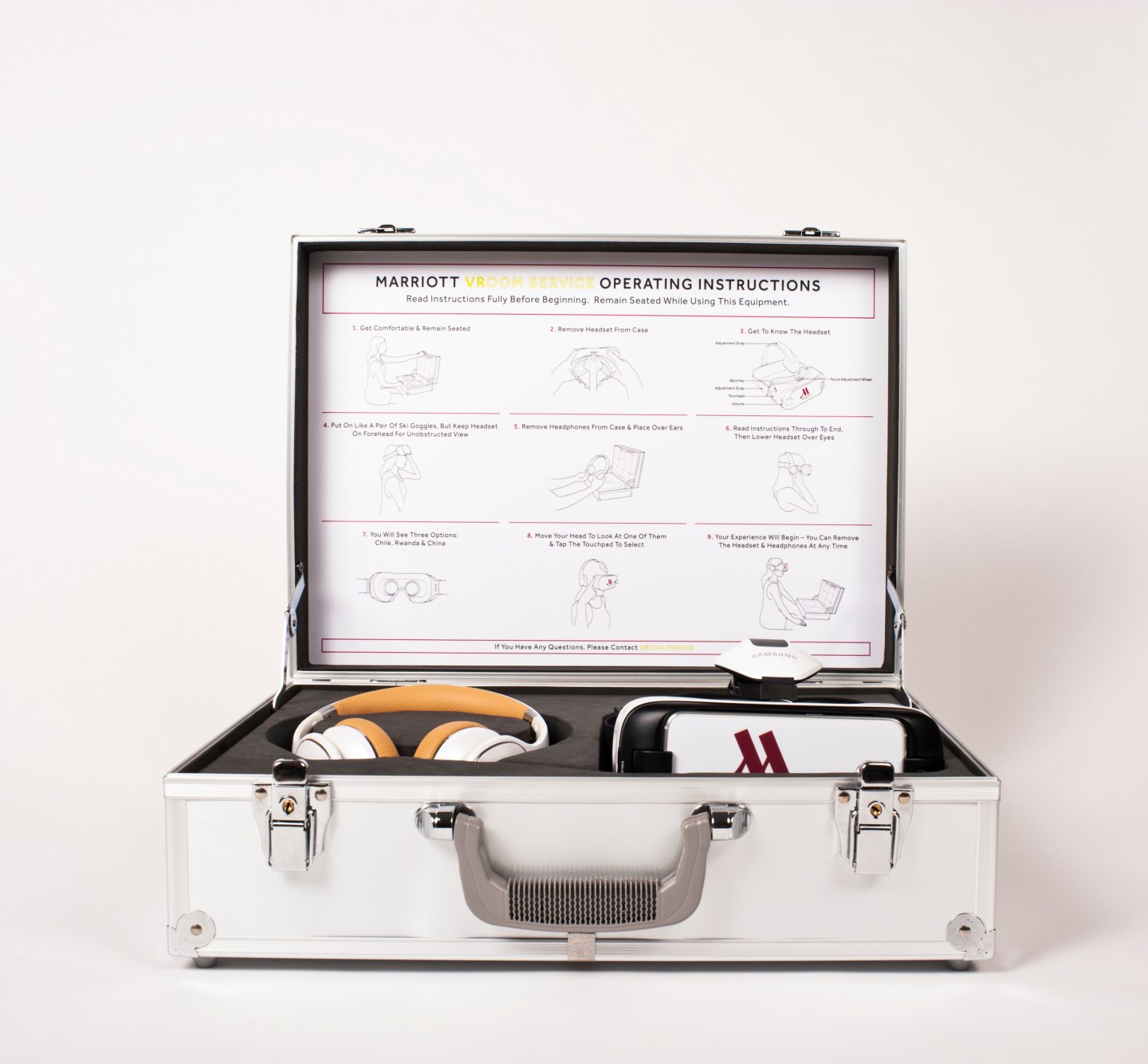 The next time you’re bored in a Marriott room, you might be able to simply call down to reception for a quick virtual reality fix.

On Wednesday, Marriott Hotels will launch an experiment with virtual reality headsets in two of its premium properties: the New York Marriott Marquis and the London Marriott Park Lane. The program, called “VRoom Service,” allows guests at the two hotels to order a Samsung Gear VR headset brought up to their room for 24 hours. The devices, which run on Samsung’s Milk VR platform, come pre-loaded with three videos that Marriott is calling “VR postcards.”

Each of the three videos shows a different traveler on a trip, narrating their feelings to an unseen camera. The three travelers include a woman in Chile, a woman in Rwanda, and a man in Beijing. The videos are in full 360 3D, and are meant to be “holistic and experiential,” says Michael Dail, Marriott’s VP of global brand marketing.

“A lot of people have never thought of virtual reality outside of gaming, so to put it inside a trip, what does it feel like to take a virtual trip?” says Dail. “That starts a conversation. Are you really traveling if you just have the virtual sensation? And a lot of people who tried it said, ‘Yes, this reminds me of what travel is, it makes me feel like I’m there.'”

Fortune got an exclusive advanced look at the technology and the content. Guests need to strap on the headset (a pair of goggles attached to a Samsung smartphone that works as a display) and put on headphones. It all comes packed carefully in a steel briefcase that looks like something a James Bond villain would tote.

The videos are simple, subdued, and impressively devoid of marketing for Marriott, though the woman in Rwanda is the owner of a popular ice cream shop in Brooklyn and does plug her business. (The man in Beijing is a gallery owner; the woman in the Andes works for “a well-known social network.”) In each video, the traveler quietly discusses how they feel about traveling.

Marriott has been continually adding new tech goodies to its rooms as amenities over the past year. In June, it rolled out Netflix, Hulu, and Pandora streaming in select rooms. One year ago, it offered a virtual reality booth in New York City that surrounded people in a 360-degree, immersive virtual trip to a beach in Hawaii. The company called it “Get Teleported” and used the Oculus Rift DK2 headset for the demonstration.

This new initiative is a sequel of sorts. But Dail says it takes the fun further. “I’d say last year leaned more toward marketing because it was off-property,” he says. “So by using the technology in the rooms, we’re bringing the experience to guests inside. It’s a property renovation. And this time, with Postcards, we’re offering the content piece, we’re telling the stories now. We’re sharing how travel has changed the lives of these three people.”

Why is Marriott doing all of this? Millennials. Dail acknowledges that the brand “realized a few years ago that it was not attractive enough to millennials. So we launched a rebrand in 2013 and started rolling out these innovations.”

Of course, VR fans may wonder when they’ll be able to upload their own content to the platform. There are obvious risks in allowing that, but Dail doesn’t rule it out eventually. He also says that while it’s unlikely the headsets will be in every single Marriott hotel, the company has hopes of rolling it out in specific new markets.

The only potential downside: What if guests don’t like it, or worse, don’t even care to try it?

“If there’s not as much engagement at the hotel level as there was off-property, then it’ll help us adapt,” Dail says. “So this is as much about behavioral feedback as how excited people are about it. And for some people if it’s just a cool one-time VR experience, that’s fine too.”