Survey: 61.9% of streamed pay TV is viewed on Apple devices 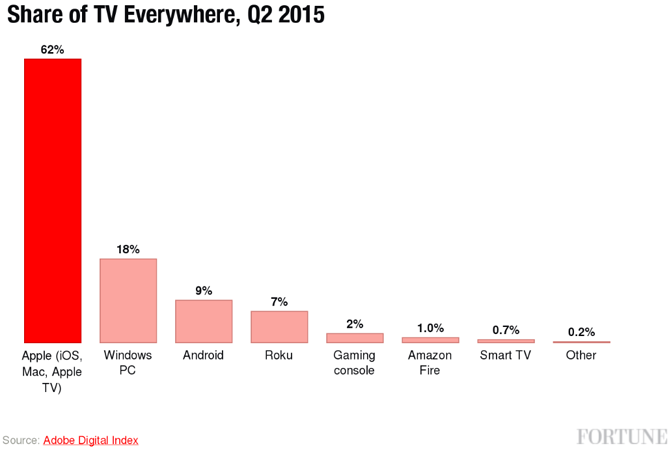 It’s not YouTube. It’s not user-generated. It’s not free.

But it’s often where you have to go to see the best shows, and it’s growing rapidly—up 63% in the last year, according to an Adobe study of 159 billion online video starts released Friday.

“TV everywhere is a juggernaut,” says Adobe’s Tamara Gaffney. “It’s coming whether the market is ready or not.”

This is the business Apple is set to re-enter in a big way next Wednesday with a new version of Apple TV.

But it’s also a business that Apple already dominates, according to Adobe, despite weakening Apple TV sales. That’s because Apple TV is not the only Apple device used to consume authenticated video. It’s not even the most popular.

The chart below is based on Adobe’s analysis of 1.49 billion TV Everywhere authentifications in Q1 and Q2 2015. Between the iPad, iPhone, Mac, Apple TV and iPod Touch, Apple captured 61.9% of these viewers.

Among the other findings in the study:

“The next 12 months will be critical,” Gaffney told Fortune. “Those who win will have a brand advantage that could last for a long time.”