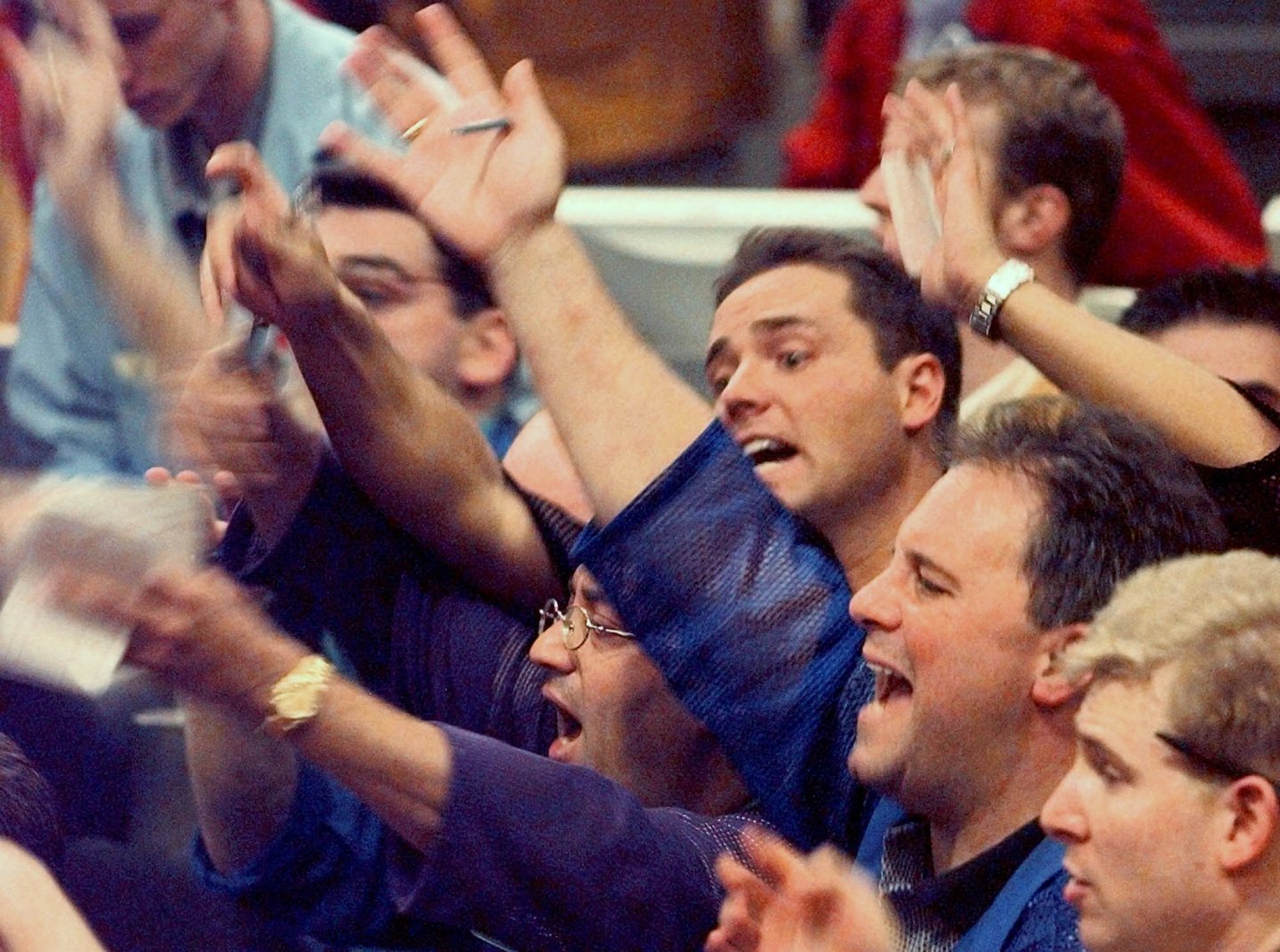 Traders in the NASDAQ pit at the Chicago Mercantile Exchange shout and signal their trades near the close of trading Monday, April 24, 2000 in Chicago. The Nasdaq fell sharply Monday after reports that the Justice Department was leaning toward asking a federal judge to break up Microsoft Corp. (AP Photo/Ted S. Warren)
Photograph by Ted S. Warren — AP

After a volatile Tuesday, the U.S. stock market stabilized, but only briefly. Worries over China continue to plague the global economy and will likely keep the stock market swinging for a while. That presents a golden opportunity for average investors to make decent money by applying a few tactics, especially through low-cost e-trading platforms like ETrade, Scottrade, or TD Ameritrade.

As more sophisticated investors know, Asian and European markets are usually good barometers for how U.S. markets will open. By monitoring the performance of the Shanghai Composite Index in China, the Nikkei in Japan, the FTSE in the U.K., the DAX in Germany (to name some of the major ones) overnight, you can probably tell the direction of stocks in the U.S. the next morning. That’s useful information to map out your strategy for the day. Think of it as your own crystal ball and be grateful that the Asian and European markets are on different time zones than the U.S.

This trick works particularly well right now because of the economic turmoil in China. European markets have the benefit of observing movements in the Asian markets during the night and parsing that information to decide how to react. By the time U.S. markets open, Europe has already vetted China’s latest developments and priced it in, which can save U.S. investors much of the analysis they would otherwise have to do themselves.

Invest on market open and close

Market open and close are magical zones when stocks trend up or down dramatically, allowing you to execute a killer trade. This is because opening and closing prices are usually driven by pure investor sentiment whereas intra-day trading responds to many other factors, including macroeconomic and company developments.

On Black Monday, for example, a strong stock like Google (GOOG) opened sharply lower, dropping by 6.4% since the previous close. Prices fluctuated throughout the day and even dipped briefly below the opening price, but for the most part climbed back up. If you had bought a share of Google stock at the opening price of $573 per share, you would have netted a profit of nearly 12% in the next 72 hours. For Netflix (NFLX), that gain would have been 30%!

Similarly, closing time tends to cause a sudden uptick in stock prices, especially during a bear market, as much of the selling has already occurred during the day and buyers rush to pick up shares, fearing that the market could go back up the next morning. As a result, market close can be a good time to sell down shares you bought earlier if you’re looking for a quick profit. After-market trading, which some electronic trading platforms offer, can also be a good bet.

Use Pre-Market prices as a guide to the day

Investing early can be profitable but only if you know which direction the rest of the day is likely to go. Just because the Asian or European markets go one way doesn’t mean that the U.S. stock market will necessarily react the same way, and you don’t want to be on the wrong side of the trade. A rule of thumb is to look at pre-market prices, which outlets like Yahoo Finance provide, shortly before the open.

If Pre-Market prices trend down in lockstep with global markets, chances are good that U.S. markets will follow their Asian and European counterparts (and vice versa), but if they’re trending up despite a global selloff, you may be better off waiting to see how the market really moves before investing. There could be domestic factors affecting the numbers and you may have no idea whether opening prices are low or high. When in doubt, hold off on the trade.

The key to a profitable trade is volatility. The more volatile a stock, the higher the potential profits (or losses). That doesn’t mean an average investor should take a massive risk on a speculative stock, but even some well-established companies with solid business models show greater movement in their stock than others. Netflix, for example, has traded in a wide ‘band’ of about 20% during the past month around the closing stock price on September 1, 2015, while other high-tech companies like Facebook (FB) and Tesla (TSLA) have traded in a tighter range.

From an investment standpoint, you should watch the trading ranges for various companies and bet on stocks that swing a lot in order to maximize your gain.

You don’t have to be a financial expert to stay on top of company news and see what may be coming on the horizon, such as an announcement about a new product or big expansion, serious competition from other players, or a stock buyback. If you time it right and buy the stock before the news becomes official, you may be able to trade on a temporary fluctuation driven by investors who haven’t been paying attention and haven’t baked the news into their own price targets yet.

Use the Limit feature to manage risk

The Limit feature on electronic trading platforms enables investors to set the maximum price they’re willing to pay for a stock. This can be very useful for managing risk in a volatile market. When stocks go down, it’s tempting to rush in and buy them before they can go back up, but the reality is that no one knows what the floor is. If you buy too soon, you could actually wind up taking a loss if the market goes down a lot more, or at the very least decrease your profits from the trade.

The Limit feature buys you valuable time to assess which way the market is going in the next few hours while also protecting your opportunity to buy at a low price. Set your Limit price about 3% to 4% below the current trading price, which is about how much it will probably fluctuate within a short period of time (if at all), and then wait.

If the price sinks further and you expect it to keep going, then you can simply change your order and lower your Limit price before your trade executes. If, on the other hand, the price starts rising again, then there’s a decent chance that the earlier low price was a floor and you can jump in and buy at the market level. Obviously, your profits will go down a little at a higher market price but it’s a worthwhile tradeoff to lower your risk. The last thing you want to do is buy a stock that you think is trading below its value, only to see its price fall even further.

The average investor may lack the analytical tools or understanding of finance to correctly predict market direction, but luckily, analysts and news outlets can do that for you. The key is to resist the temptation to react to a single news story about the market or an individual stock. Wait until multiple observers are saying the same thing since that will set the market’s mood, and then move quickly to buy or sell before other investors catch on.

The exception to this is if you’re buying stock to hold over the long term, in which case you may be better off ignoring one-off developments or analyst comments and betting instead on the company’s fundamentals, such as long-term strategy, market share, expansion potential, dividend policy, price-to-earnings multiple etc.

A good example of this can be found in the stock price fluctuations for Apple (AAPL) over the past 10 days. Even as news stories proliferated about Apple’s problems in China and trader paranoia about the ‘death cross’, accompanied by panic selling, the tech giant’s fundamentals didn’t change. Days later, CEO Tim Cook assured investors that the impact from the troubled Chinese economy would be minimal, and the share price shot back up. The point is that if you’re truly going long on a stock, the market’s current mood doesn’t matter. But if your aim is some quick profits, then it matters a great deal.

All investing is inherently risky and notwithstanding the tricks outlined above, all investors should follow the same maxim that large institutional investors adhere to, which is diversification. Even if you believe you have a winner on your hands, it’s important to hedge your bets and place your money in multiple stocks with different profiles. That may limit your profits but it will also help to mitigate the risk if your calculations turn out to be dangerously wrong. No one, after all, can truly predict the arcane movements of the stock market.