Why Israel dominates in cyber security 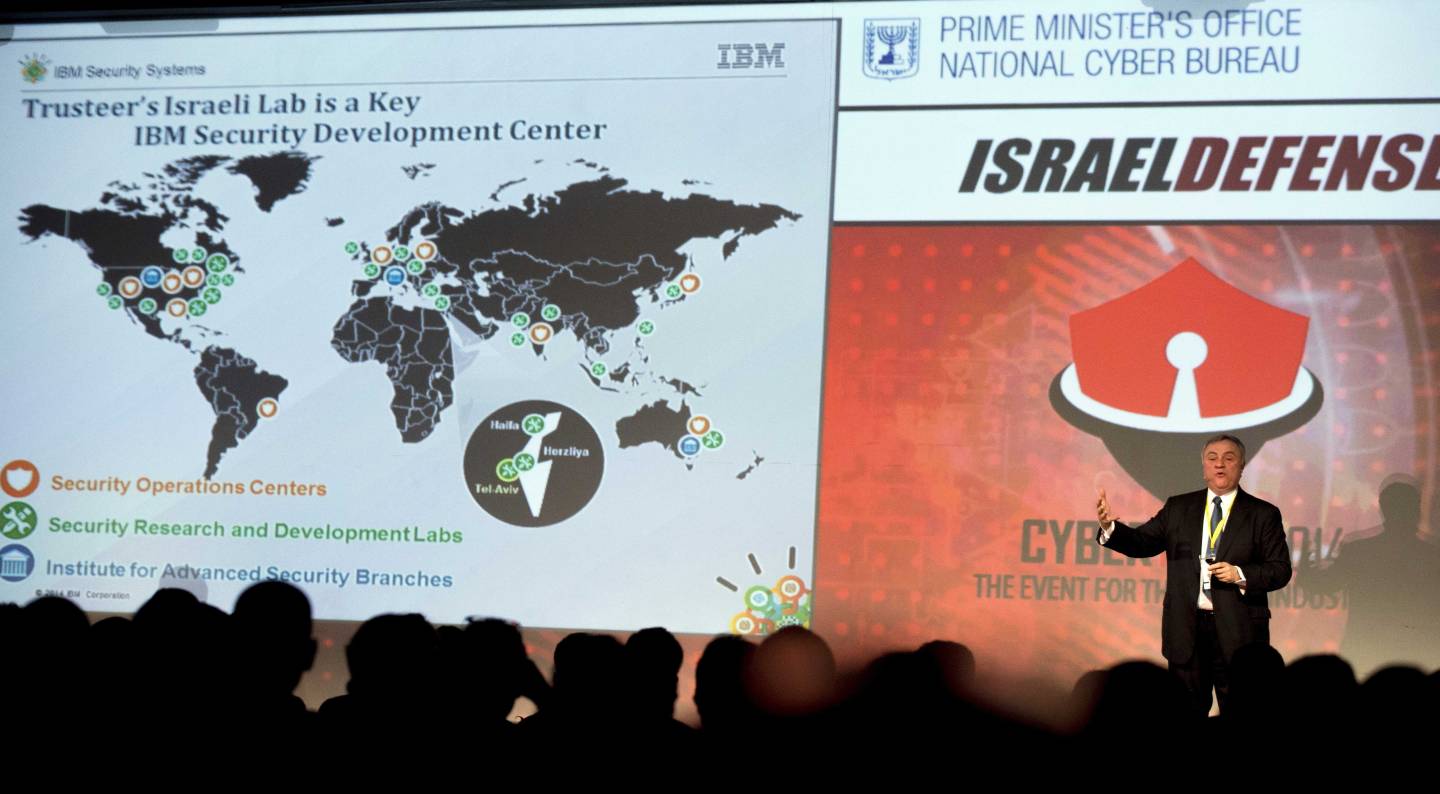 Steve Mills, senior vice president and group executive of IBM Software and Systems, speaks during the opening of the "CyberTech 2014" international conference on January 27, 2014 in the Mediterranean coastal city of Tel-Aviv.
Photograph by Jack Guez — AFP/Getty Images

In recent months, and especially since the nuclear deal with Iran, there has been a strain between the U.S. and Israel. Despite this, one area where the ties remain close is cyber security, with the two parties even cosigning a statement committing continued cooperation on that front last month.

A regional power devoted to ensuring its own survival, Israel has burgeoned into a high tech epicenter built around Internet security, anti-virus software, and other cyber defense technologies. Much of this is an extension of its self-reliance, and the added fact that since the creation of modern Israel, the nation has faced enemies on its borders. “The challenging environment Israel faces in the Middle East in the physical world has reflections also on the cyber world,” says Dudu Mimran, CTO of the Cyber Security Research Center at Ben-Gurion University, located in Beer Sheva, Israel. “Security is a subject that can be taught theoretically, but nothing is a substitute for a real hands-on experience and we’ve got lots of it.”

And while cyber security has become worldwide issue, Israel’s cyber security expertise has evolved naturally from its constant vigilance, both online and off. Ensuring that its people remain able to take on threats and at all levels has become center to Israeli governmental strategy, and transformed what began as a cottage industry into a thriving sector of the nation’s economy.

Israel’s information security ecosystem has many aspects. There are mature companies such as Check Point; there are venture capitalists which focus on cyber such as Jerusalem Venture Partners (JVP) Cyber Labs; and there are research collaborations such as the Deutsche Telekom Innovation Laboratories activity at Ben-Gurion University. This array of expertise has turned heads, worldwide. “Microsoft(“MSFT”) and many other multi-national companies identified that Israel is a cyber powerhouse with the right talent,” says Mimran. “They invest money mostly in already acquiring existing teams to setup cyber security research and development centers.”

According to Charles King, principal analyst at Pund-IT, government support of science and science education have resulted in most major IT vendors placing research facilities in Israel, which has in turn nurtured a strong entrepreneurial spirit and culture. “You could argue that this combination of factors—historical, political, societal and cultural—have all combined to make Israel a natural epicenter of security innovation,” he says. “It is certainly timely, especially considering the growing power and threat of global cyber attacks.”

And in a nation where nearly every citizen faces compulsory military service, it easy to see the ties between the military and the IT sector. The increasing use of computing technologies in warfare has strengthened those dynamics, as has the regular migration of former military personnel into defense and IT industry positions, says King.

One such example is Adallom, maker of cloud security, which was founded in 2012 by three former members of the Israel Defense Forces (IDF) and has some 80 employees in offices in Israel and the United States. The company gets its name from the Ad Halom, the site near Ashdod that was the furthest point reached by the Egyptian Army in the 1948 Arab-Israeli Wars, and is otherwise known as the “the last line of defense.”Adallom has developed security technology for remote servers, including those running Salesforce’s, Microsoft’s or Google’s cloud services. Its software can monitor the use of cloud application by individual employees, and this includes looking for patterns and anomalies that could be security breaches.

While there is no direct link between the IDF and the IT sector, there is a flow of people who graduate from certain military units—notably those that deal with Internet-based technologies including cyber warfare—and then become highly desired talent in the private sector.

“Connecting the talent pool coming out of defense organizations with the strong entrepreneurial spirit that exists here, and you get the perfect ingredient for a powerhouse, in terms of cyber security startups and technology companies,” says Mimran.

And that connection has been making strides in digital security for decades. For instance, In 1993, Tel Aviv-based Check Point developed FireWall-1, one of the very first protection solutions for Internet-connected computers. The defensive software was developed by Israeli-entrepreneur Gil Shwed, who served in the IDF’s Unit 8200—which is responsible for collecting signal intelligence—and grew the company into one of the country’s biggest tech giants. Check Point foresaw a need for protecting computer networks, and more importantly, filled that need before most people were even online.

“America’s Cisco didn’t even enter the market until 1994,” says Internet security professional Stephen Coty, director of threat research at Houston-based Alert Logic. “Check Point introduced a firewall solution to protect enterprise and came out with a GUI interface when others were still relying on command line controls.”

More than twenty years later, there more than two dozen other Israeli firms have followed Check Point’s lead into the cyber security space, a leading industry in Silicon Wadi, the country’s own version of Silicon Valley. According to Israel’s National Cyber Bureau, Israel accounted for 10 percent of global security technology, and sales of its security software topped $60 billion in 2014.

With these numbers, Israeli security firms have caught the attention of western tech companies. For instance, in July it was revealed that Microsoft plans to acquire Adallom for $320 million. Prior to the acquisition, Adallom had secured around $50 millionin funding over three years. The company, which is currently headquartered in Menlo Park retains offices in Tel Aviv, and will become the center for Microsoft’s security business in Israel. And the acquisition also follows Microsoft’s purchase of Israel-based security software developer Aorato for a reported $200 million.

But the Windows developer isn’t the only big named outsider getting active in Israel. Last month, British micro-chip designer Arm Holdings also announced that it will build a new hub in Israel, following its purchase of Israel-based Sansa Security, a provider of Internet of Things (IoT) and mobile trust and security technologies, for a reported $100.3 million.

These exits demonstrate just how valuable Israel’s cyber security expertise has become. “Israel is one of the few countries positioned to become a worldwide cyber leader,” says Mimran. “In the world of cyber, (where there is a) high threat level, such leadership is much needed.”

And of course, as cyber warfare continues to become a conventional tactic, Israel’s leadership in the space can also help it continue to survive. That’s one reason why the contry continue to focus on preparing its students for future cyber conflicts. “They are teaching coding and application at an early age,” says Coty. “In this way they are already raising the next generation of cyber warriors.”