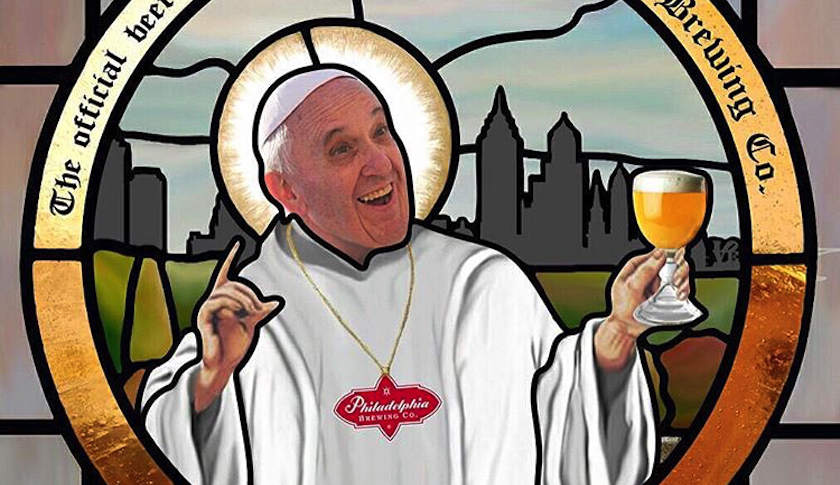 Philadelphia brewers don’t need divine intervention to come up with a creative way to toast Pope Francis’s visit to the City of Brotherly Love. A small batch of beer with a funky sounding name will do just fine.

A handful of craft and microbreweries in the Philadelphia region are seeing a prime marketing opportunity with the visit of Pope Francis, who will be in the city the weekend of Sept. 26-27. Timely brews include names such as “Jesus Wept,” “Holy Wooder,” “Nope,” “Pap Ale,” and “You Only Pope Once.”

An emerging economy tied Pope Francis’s arrival next month has inspired local restaurants and bars, apparel makers, artists, and others to tap surging interest in the occasion. And that means there’s money to be made. The Pope’s visit, along with the World Meeting of Families (an event held every three years), is expected to boost the city’s economy by $417.8 million, according to the Philadelphia Convention & Visitors Bureau.

That news excites Dennis Hewlett, owner of a South Philadelphia bar called The Pub on Passyunk East (whose initials spell out POPE). He intends to stock pope-themed beers for the occasion and host special nights throughout the week including a “Confessional Happy House” and a “Last Supper.”

“I’m rallying behind it,” Hewlett says. “Having a bar named ‘The Pope’ doesn’t hurt.”

The craft beers marking the occasion are being launched in small quantities and are mainly available on tap behind a bar or for servings at tasting rooms and small restaurants.

“It is a great way to bring in new beer lovers to be exposed to your brewery and also reward your loyal customers with something new,” says Julia Herz, craft beer program director for the Brewers Association, a nationwide industry group. Herz says the country’s smallest brewers are often best-positioned to launch limited beers around big events because they are already in the business of making small batches.

Here are a few of the local beers on tap to toast the Pope:

Holy Wooder. If you’re from the Philadelphia region, you’ll understand that the name is a play on how locals pronounce “water.” Made by Philadelphia Brewing Company, the beer is a Belgian Tripel. It is a style co-owner Bill Barton says fit the brew he envisioned, as he didn’t want to make a light beer to honor Pope Francis: “We thought something a bit more savory, or a sipping type of beer, would work.” Holy Wooder will be sold throughout the Philadelphia region.

Jesus Wept. Philadelphia-based Crime & Punishment will debut its version of a German sour wheat beer known as Gose, the week of Sept. 23 to commemorate the Pope’s visit. Brewer Mike Wambolt, who has a master’s degree in theological studies, says the name was inspired by the Bible: “Jesus Wept” is from John 11:35. “It is the only style where salt plays a major role in the flavor profile,” Wambolt says.

Nope. New Jersey’s largest brewery, Flying Fish Brewing Co., is also getting in on the action for area residents who don’t want to make the pilgrimage to Philadelphia. The Somerdale, N.J.-based company will be serving a small batch of the IPA to gently poke fun of the hype the Pope’s arrival is generating. “We say it is for folks who have no interest in walking over the bridge to Philadelphia,” says Gene Muller, Flying Fish founder and president. “It is a moderate amount of alcohol that won’t force you to serve any kind of penance the next morning.”

Pap-Ale. Iron Hill Brewery & Restaurant head brewer Chris LaPierre says he wanted to create his first Belgian Single beer after already experimenting and serving many Dubbels and Tripels in the past. His inspiration? He wanted to craft a beer in the style brewed in Belgian monasteries, where Trappist monks spent their days making beers but were only allowed to drink the lower alcohol beverages. The beer at the time was referred to as Patersbier, which means “Father’s beer.”

You Only Pope Once. Cape May Brewing Co. is distributing its “very hoppy pale ale” in Philadelphia and Cherry Hill, N.J., as well as in the Cape May region near the New Jersey shore. Co-founder and president Ryan Krill says a few colorful names were floated in the conceptualization process, but in the end, the brewer went with a title that was respectful.